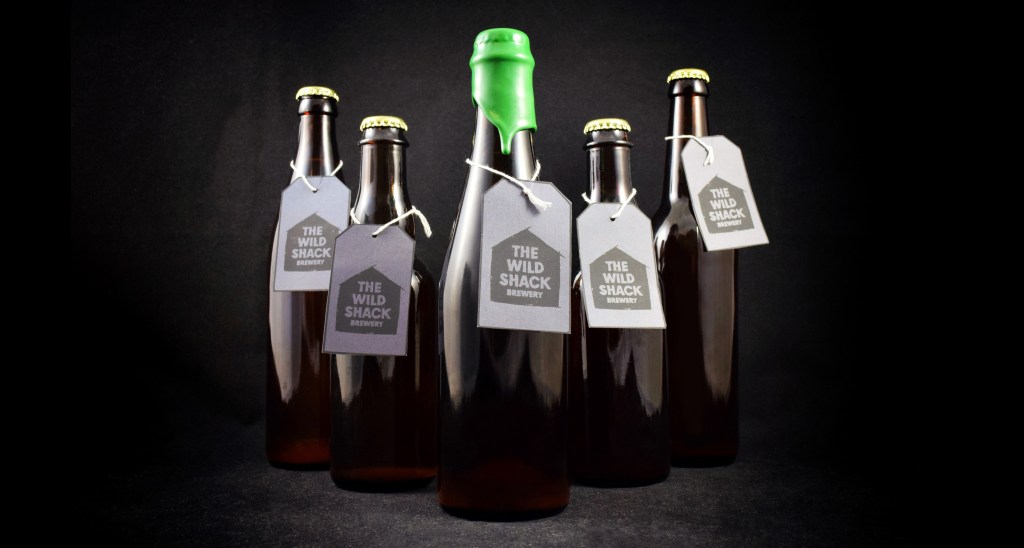 “Hey Noah, when the hell are you going to stop writing so many damn articles about fruit beer!?”

Well, maybe I’ll stop when fruit stops tasting so damn delicious! Alright, so no one has actually asked me that question, but I’m sure some people have thought about it. But I’m not stopping, okay, so there.

As I’ve mentioned many times before, the use of fruit in the making of beer is nothing new. However, its resurgence in the contemporary craft beer scene has snowballed recently. This is particularly apparent with the current rise in popularity of kettle sours, saisons, and anything containing brett. That being said, fruit has also been making its way into virtually every style of beer known to man, including imperial stouts, Trappist ales, lagers, and so on.

Today I’m looking at four different beers from one of my favourite breweries, The Wild Shack. All of them contain fruit in some manner, and all are sour. If you are unfamiliar with The Wild Shack and their creations, it’s the brainchild of two of my close friends, Maxime Dallaire and Remi Galipeau, who can be found on most Sunday nights brewing their beers out of their apartment in the east end of downtown Montreal.  These two sexy monsters (as well as their delicious concoctions) have managed to catch the eye and attention of several Quebec based breweries, resulting in several collaborations.

The Wild Shack has collaborated on three different beers with L’Espace Public, most recently a wondrous NEIPA, whose delicious repulation is spreading amongst the beer community. They have worked with Pat Roy of Brouerie Sutton, where their brett fermented and sour collaboration sits in oak barrels, waiting to be bottled and blended at a later date. Needless to say, these guys are getting around, and learning more and more each day, which makes their beers better and better. I wrote a post about them in early 2016, and in the short time since, their brewing skills have just gotten more and more impressive. So, let’s checked out these lovely fruited sours! 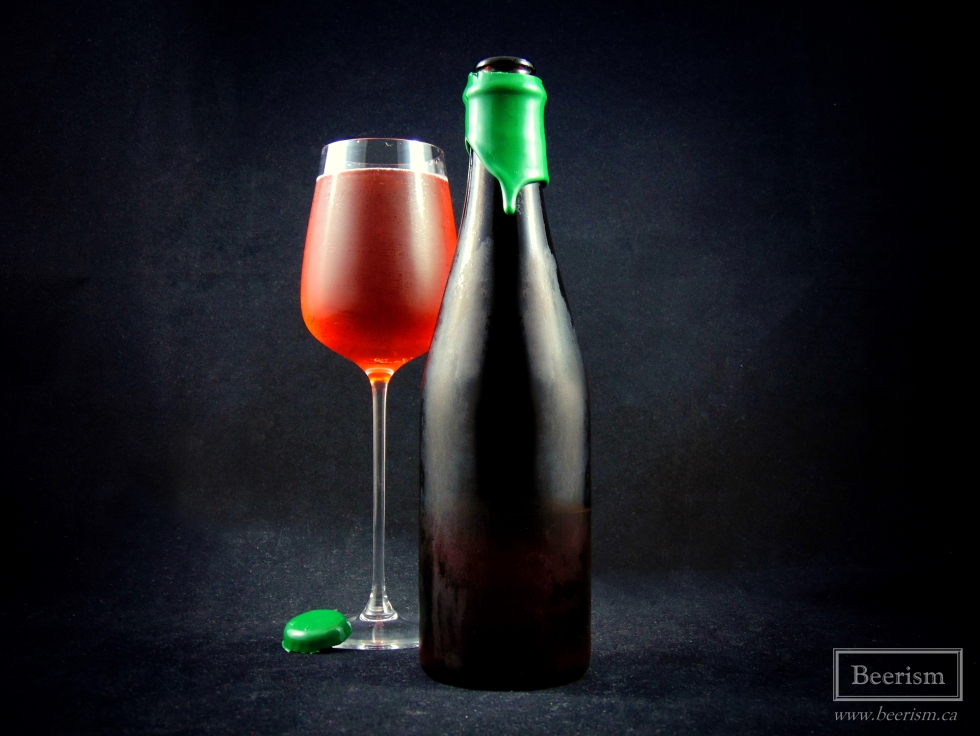 JCVD is one of The Wild Shack’s oldest batches, and it actually almost met the drain. Remi and Max were going for a Berliner Weisse, and used a blend of lactobacillus and saccharomyces for quick souring. However this left a lot of sulphur behind, and wasn’t particularly sour. That being said, they still held onto it, tossing in some brettanomyces for good measure. About seven months later, the sulphur was all gone, and the sourness was were they wanted it to be, so they added kiwi and raspberry. This bottle is almost a year old at this point, it was great fresh, and I’m curious how it’s doing now.

The nose begins by wafting bright fruity and acidic aromatics. The kiwi and raspberry aromas are very pleasant and work perfectly against the lactic sourness. Some phenolic bretty funk is there, but it’s minimal, instead inviting the jammy fruits dominate the aromas.

Dryer than initially anticipated, this Berliner drinks brilliantly. The sourness is present but kept in check, allowing the raspberries and kiwi to really shine. The fruits are jammy and luscious, but the finish is clean, leaving only the lingering fruits (especially kiwi) and some light wheat flavours. It’s juicy, tart, and tannic, with a tangyness that you can only get from kiwi. The beer’s balance is pretty much on point, with the sourness, and the fruity sweetness and the dry phenols all working in perfect harmony.

JCVD is complex yet straightforward, and still highly drinkable, which is what The Wild Shack always aims for. It was great fresh, but held up very well over time.

The boys wanted to do a kettle soured saison for a while, and when they got their hands on a bunch of merlot grapes, they figured it was definitely time. They used lactobacillus plantarum from probiotics pills and fermented the beer with a blend of two strains of brettanomyces and saison yeast. It took longer to ferment all the sugars of the grapes, which delayed its release. So in the end, it took about six months to get the balance to where they wanted it.

Bomba Agria’s nose is a complex mix of fruity merlot grapes, coupled with sour and zesty acidic compounds that dance alongside a slight musty funk. Cherries, lemons, and berries also come through, delivering quite a fruit forward aromatic (and very inviting) nose.

Wow, this is very tart, sour, and extremely tannic. The dryness is through the roof, carrying a mouth puckering finish that delivers intense acidity alongside grape tannins that suck the moisture from my mouth. That being said, it is very fruit forward, with enough residual sweetness to balance the intense sour and tart finish. Blackberries, red grapes and sour cherries make up the fruit flavour profile.

As much as this beer carries a pretty aggressive tartness, it still manages to be balanced in its own right. It is truly a wonderful beer, carrying perfect carbonation and body to go alongside the delectable flavours.

Decepticon is an updated take on one of the Wild Shack’s earlier saisons. It’s a classic saison, wort fermented with a blend of Brettanomyces, Lactobacillus, and Pedioccocus over a long period of time. It was aged for about ten months, and that point fresh Adaulfo mangoes were added to the mix and aged another two months. Mango was chosen because they noticed subtle acetic notes and thought the sweetness of the mango would blend well with the slight vinegary elements and the intense sourness of the base beer, resulting in a prefect balance.

The nose is a beautiful sour mix of tart under-ripe tropical fruits (like mangos of course) mixed with a zesty and earthy phenolic linger. Light floral honey aromatics come through as well, with ripe strawberries resting in the backdrop.

Like the nose let on, this is quite tart, with a nice tanginess from the fruit. Amongst the sour candy, is a big fruitiness all around, with tropical delights all over. Again though, more mango than anything else. The layers of tart complexities are like waves of wonderful taste explosions on my palate. It’s like cherry blasters meets fuzzy peaches, but exceptionally dry and juicy all around, carrying subtle hints of white balsamic.

Unlike many other highly acidic saisons I’ve had, the carbonation is still very effervescent, and the body carries a substantial presence while still being crushable.

Vortex is a sour rye saison, fermented with several different strains of brettanomyces, lactobacillus and pediococcus. It sat for about ten months and then aged a further three months on fresh apricots before being bottled. They found the nose was the weakest part of the beer, which is why they chose apricots, given how explosively fruity the aromatics are. As well, the pepper rye notes would further compliment the apricot flavours.

The nose throws massive amounts of apricot at my senses. Candied stone fruits mixed with fuzzy peaches. There is so much acidity that the aromas alone are making my mouth water and cower in anticipation. It is bursting with rich overripe apricots, carrying some subtle floral notes in the backdrop.

Dear god this is sour. The sweet candied fruit of the nose were all a ruse. Instead, this is extremely dry, with a pH that will likely be giving me heartburn tonight. That being said, the acidity is really accessible, and finishes clean on the palate.

It’s juicy and full of fruit, but unlike the nose foretold, it doesn’t overpower, instead lending a nice compliment to the heavy sourness and light yeast components. Apricots are certainly the most prevalent fruit flavour, but notes of peaches, sour cherries, and candied lemon comes through as well. There is a richness to this beer, and although being quite drinkable, it has a nice robust and silky body from the rye.

Vortex is complex but also rather straightforward, with a clean profile that becomes more and more inviting with every sip. I’d personally like to see less acidity, but I’m also a wuss.

As usual, The Wild Shack kills it. Their use of fruit in all of these beers worked perfectly, helping to lend balance to the inherent flavour profile. The sourness was intense, but integrated well with all the other components. Sometimes, just sometimes, some of the best beers in town are being brewed in a small apartment in the east end…

Unfortunately none of these bottles are currently available, but if you are interested in trying any Shack beers, I highly suggest you like their Facebook page.