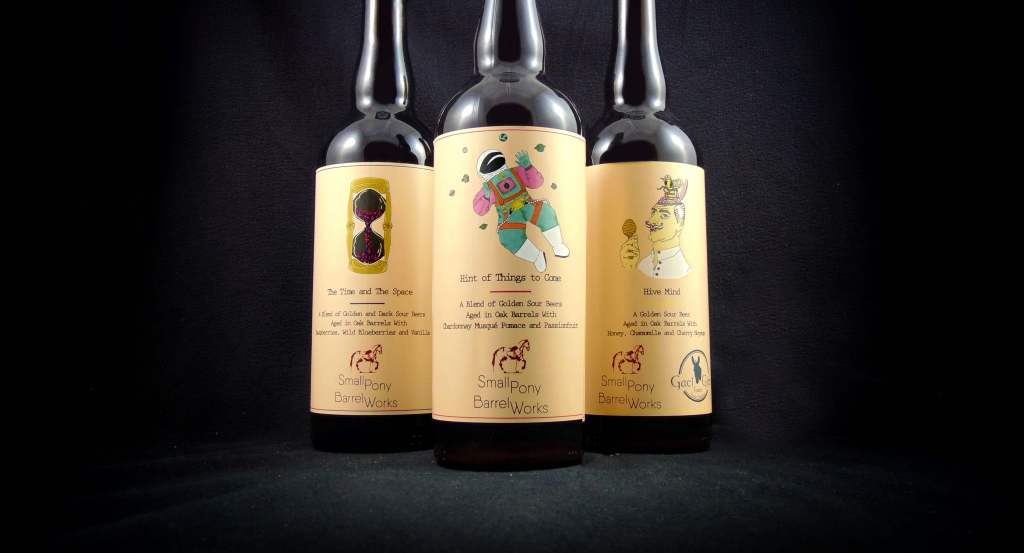 Small Pony Barrel Works are now well into their second year of existence. This brewery and barrel house is located in Kanata – a suburb just west of Ottawa – where they exclusively create barrel-aged sours. I did a deep dive review of the four first bottles that dropped in late 2017 along with an interview with owner and brewer Sean McVeigh. You can read it right here.

Small Pony has continued to pump out a constant stream of sour beers since its inception, and I’ve been fortunate enough to try most of them. It seems to me that Sean’s approach has always been to create aggressively tart yet balanced beers that usually involve the addition of adjuncts. Sometimes they contain more classic sour accompaniments – such as fruit – or more experimental ingredients and/or processes, like an intense dry hop, spices, or even coffee. These types of barrel-aged sours have been very popular in the U.S for quite a while now, however there are very few breweries in Canada that explore these intense but delicious monsters that we have now come to know; especially breweries like Small Pony who dedicate their entire production to this process.

Earlier in 2018, Small Pony created their Culture Club. This program was designed to provide its members with exclusive one-offs, as well as more experimental offerings that were produced in small numbers with the sole purpose of being sold to those who bought into the membership. Each member received two bottles from four different releases and a branded glass.

2019 is now upon us and this year’s Culture Club has arrived not too long ago. Just like last year, members receive two bottles of the four releases (eight bottles in total), but they have the choice of a branded glass and a T-shirt, or simply a hoodie. It’s going to set you back $195, however, given the number of bottles included and the process and ingredients required, it’s certainly a fair price. I think there are still a few spots available for this year, but click here for more information on how to join.

Today I’d like to take a look at three of the four beers released last year in order to give you an idea what these luscious bottles are like.

Hint of Things to Come 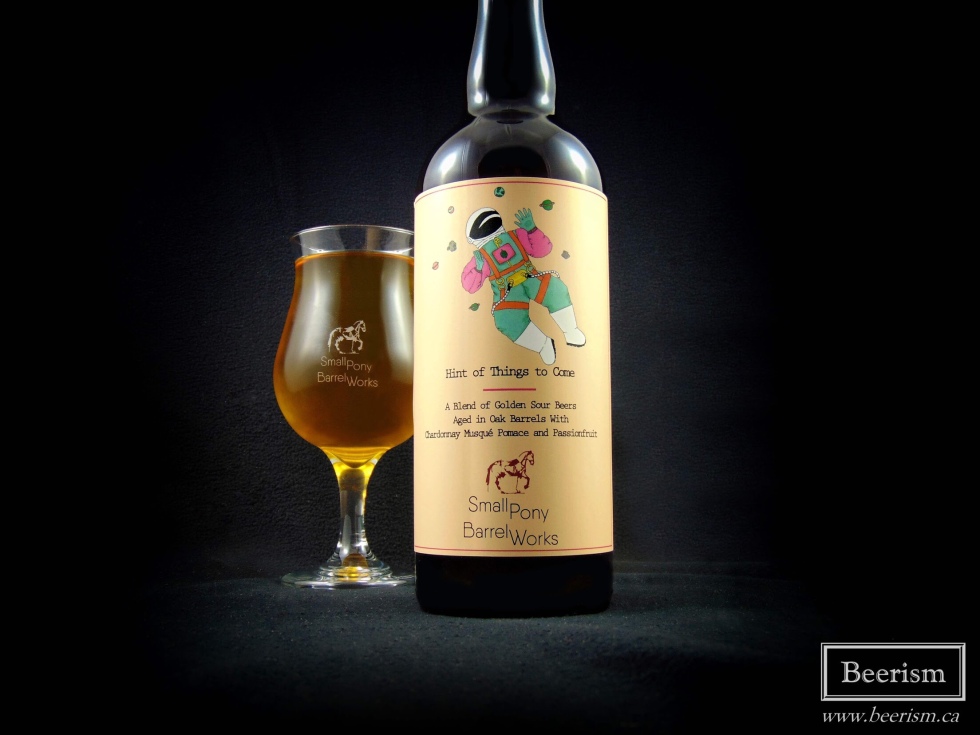 The first bottle to be released as part of the 2018 Culture Club was “Hint of Things to Come”, a blend of golden sour ales, aged in oak barrels with Chardonnay Musqué Pomace and passionfruit.

The nose is a bright and rich blend of zesty passionfruit, tart green grapes, and loads of spicy oak layers. Vanilla and candied peaches mix with lots of acidic elements to create a pretty spectacular aromatic profile. This blend is wonderful. The passionfruit is intense, but there is just enough without it overpowering. The vinous layers add complexity, providing zesty juiciness and a white wine-like profile that delivers light tannins to help dry things out. The acidity is very apparent, but not overly aggressive, lending a tangy and sharp balance to the bright passionfruit and juicy grape pomace. The beer is only about half carbonated, but it still works, creating even more of a winey drinking experience. Amazing stuff.

The Time and The Space 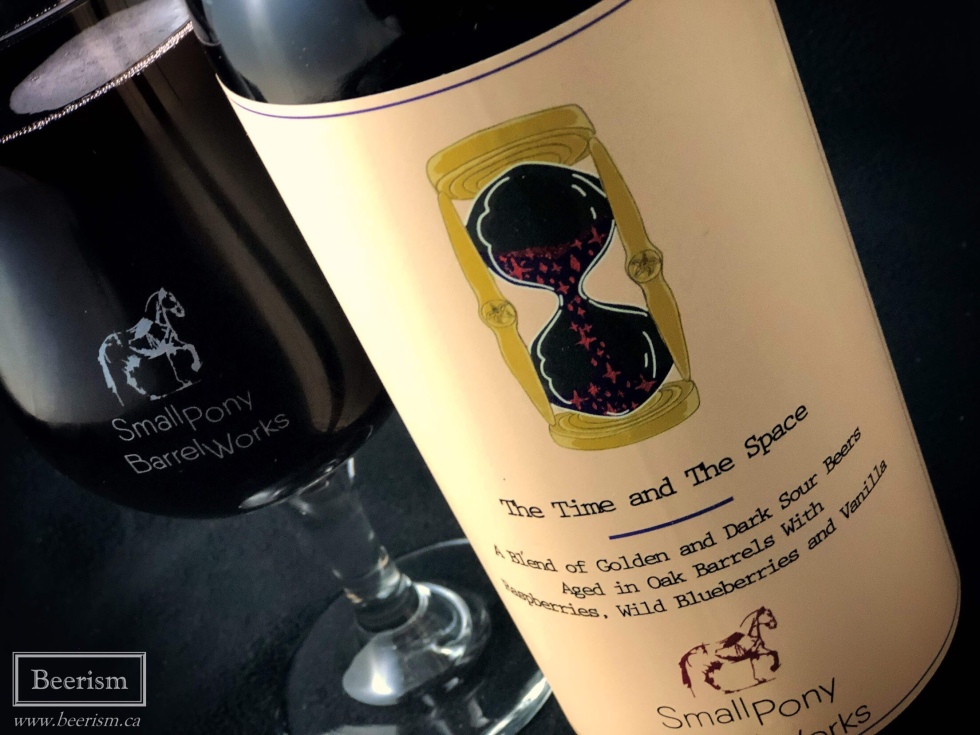 The Second bottle from last year’s Culture Club is a blend of dark and golden sour beers, aged on oak with raspberries, blueberries, and vanilla.

Off the bat the nose is heavy on the vanilla, with lots of candy-like confectioners sugar. Rich macerated berries come through next, delivering juicy acidity in the backdrop. Just like the nose, the vanilla dominates, providing a biting candy essence that’s almost earthy. Next comes a big blast of raspberry and blueberry juiciness, which is immediately cut by a dry acidity. The fruit profile is robust and has a wonderful layered berry profile; matched very well against a restrained but still very apparent acidity. The barrel lends tannins and light spicy components as well.

Overall, although well executed, the vanilla is far more aggressive than I would like. It dominates my palate on each sip, and I have a hard time getting around it. That said, as it warmed, the vanilla integrated better and started to grow on me. As well, I ate some sharp cheddar alongside, and wow, amazing pairing. I’d love to try some strong creamy cheeses with this fruity bad boy.

The third in the series is Hive Mind, a golden sour beer aged in oak barrels with honey, camomile and cherry noyaux.

The nose launches big almond and marzipan notes, alongside subtle camomile flowers. There are loads of floral honey layers as well. Extremely inviting aromatics are happening here. The palate matches, delivering a perfect balance of nutty almond flavours alongside an herbal chamomile softness. The acidity is apparent, but not as aggressive as some of their other offerings. The finish is long and tannic, with a dry linger that cuts through any of the residual honey-like sweetness.

Tea with honey and lemon was a comfort drink I drank as a child, and this manages to embody that profile in the form of a beer. That said, everything is in balance and works together. Hive Mind doesn’t come of gimmicky or overbearing – it’s delicate, soft, and damn delicious.

So those are three of the four bottles released from last year’s Culture Club. They are fun, experimental and well executed. I’m not sure how many memberships are left for 2019, but it’s certainly a treat to receive these delights ever few months. Once again, you can check out the details right here. Cheers!

When the sun goes down tonight, The Chin Wag is back! @baospodcast @hopsandbros @nathandoesbeer @5ebaron
@bieresjukebox began 10 years ago as a small contract brewery, delivering some of the first American-influenced hop-forward beers that this province had seen. From there they evolved with the times, creating more contemporary styles and interesting concoctions over the years. That said, for their 10th anniversary, Jukebox is shifting directions and going forward they will be heading back to the basics and focusing on classic American beers. These are their three brand new beers! @bieresavantgarde
Exciting news today! For the first time Beerism will be offering original articles written entirely in French! And what’s even more exiting is that this content is being written by one of the francophone beer media writers I respect the most. @la.chopine delivers beautiful photography and exquisite tasting notes – she carries with her a seasoned and intimate knowledge of the beer scene, and will be writing with a particular emphasis on the Quebec City beer scene.
Tonight at 9:00PM we drink a special anniversary bottle from @5ebaron for The Chin Wag! Join @baospodcast @nathandoesbeer @hopsandbros and me for another fun chat.
This is “J’peux pas sentir ma face…”, a 14.5% imperial stout aged in rum barrels from the good folks at @bieresavantgarde
For the 25th episode of The Chin Wag we are going to be drinking “Trippy Rock” from @5ebaron and chatting all things cannabis! Join us live here on Instagram at 9:00PM Eastern. @nathandoesbeer @baospodcast @hopsandbros
Today @bierelagerbrau releases a brand new beer called Výčepní at @bieresavantgarde ! I’ll be there enjoying pints on their killer terrace!
@bgbrasserieurbaine released two beautiful bottles recently. First is FAUNE, a blend of mixed fermentation beers with no less than 5 different beer cultures from BG and @nanocinco . Following the blend, the beer was refined for 3 months in a barrel of red gin from the Distillerie @distillerie_stadacone
Going live at 9PM! @baospodcast @5ebaron @hopsandbros @nathandoesbeer
Did anyone have a chance to try my latest collaboration with @bgbrasserieurbaine ?
…After drinking sample after sample and trying to create blend percentages that incorporated several beers, we realized that there were two outliers that stood drastically above the rest. When combined, they were perfect and any new additions to the combo simply took away from it instead of the desired compliments. Ultimately, the end product consist of a big lactose-infused imperial stout, aged for 10 months in Jim Beam Bourbon barrels alongside a “double mash” Imperial Stout aged for 6 month in Widow Jane Bourbon barrels.
This is BLENDISM!!!
I can’t believe it’s been 4 years since @4originesbeer opened their doors for the first time.
@ministereipa is a side brand from @monsregius where they will be concentrating on all thing contemporary and hop-forward. This here is their first IPA callees “Décleration Iniciale”. Nose is tropical up front. Lots of mango and papaya cokes lol though on the aromas alongside amble zesty funk. The palate is zesty up front as well, with lots of very ripe fruits like mango and tangerine, while a bit of coconut-forward Sabro layers peek in. An ample body rounds things out, while the finish is a touch sweet, but still well balanced enough. I’m anxious to see the evolution of these beers.
Tonight live on Instagram! 9PM! Come check us out. Special guest @bebothoughts from @thirdmoonbeer !
@smallponybarrelworks has been the quintessential American inspired barrel-aged sour brewery of Canada ever since they opened their doors a few years back.
The Chin Wag again tonight. Live here on Instagram at 9PM EST with @baospodcast @nathandoesbeer and @hopsandbros - always drinking a @5ebaron beauty.
"C’est Juste d’la Bière" is a collaborative project between myself, @voxandhops , @hoppy_bitch , @baospodcast , @_la_canette_villeray_ and the amazing @bgbrasserieurbaine .
My latest collab!!! Come get some today! Also, Monstrolicious forever!
I miss black IPA and lately I crave a good black lager. Well, @bgbrasserieurbaine teamed up with @kahnawakebrewing to create “Premier Lien”, a Black IPA - abs I’m here for it!