Home » Beer Reviews » Death by Péché: That Time we Drank 18 Péché Mortel Variants and Then Died 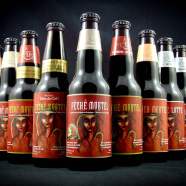 Death by Péché: That Time we Drank 18 Péché Mortel Variants and Then Died

Last Saturday I set into place a tasting that was as high in caffeine as it was in alcohol. It wasn’t an easy task to overcome, but it was certainly delicious – until it wasn’t?

Over the years I quietly collected various vintages of a particular beer that is often regarded as not only one of the best beers in Canada, but perhaps the world. It’s a beer that has it’s own day dedicated to it, where various pubs in many countries serve a slew of different versions of this luscious black beverage.

Considering you’re likely not blind and you probably read the title, you already know I’m talking about the infamous Péché Mortel from Dieu du Ciel! 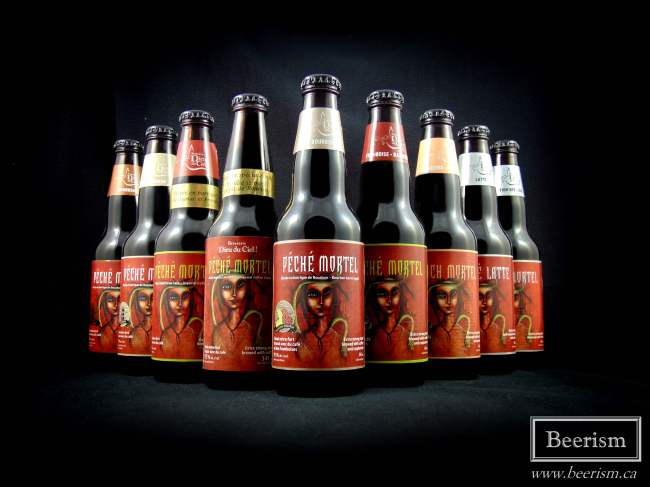 I had 18 different variants of this 9.5% imperial stout at my disposal and I thought, “Hey, let’s drink them all in one night.” I’m not going to say it was a bad idea, but I’m not sure it was a good one either considering how I felt the next day.

Here is what we drank:

I laid out close to sixty glasses on the table and we got to work. There were six of us to perform this feat. In order to avoid palate fatigue and general Péché overkill (pfff, if that’s possible), we separated the tasting into four parts, allowing us to stuff our faces with lots of sours and hops in between each “course”. Because of course we needed more booze. 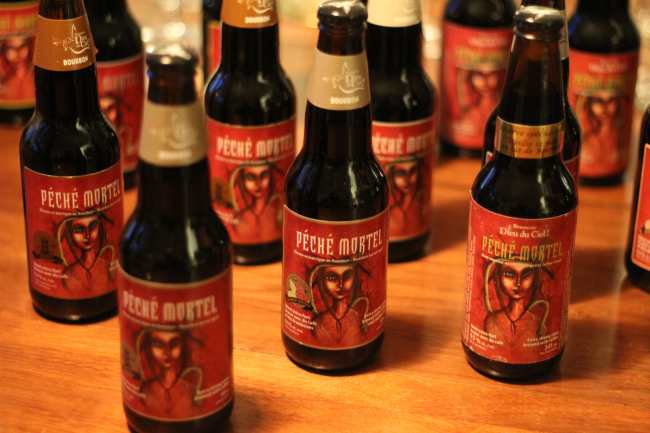 We began with the four standard bottles (2014, 15, 16 and 18). The 14 was a touch oxidized, delivering some apparent sherry notes. The 15 and 16 were less so, finding a better balance with the coffee and dark roasted notes. The 18 was sharper and more intense, and probably the best of the bunch overall, even though the older bottles aged nicely.

Next came the non-fruited variants: Véniel, Édition Speciale, Termopilas and Latte. Véniel was their take on a lower ABV, standard style coffee stout. When fresh it was really nice, but the two years in the cellar were not kind, leaving a watery shadow of what it once was. Édition Speciale and Termopilas are essentially standard Péché but with different coffee variations. Termopilas was drinking really nice, with some subtle fruit and chocolate notes from the lighter roasted coffee beans. Édition Special was still drinking well, but being two years old, it just didn’t seem to hit the mark the way I remember it. Latte (which was standard Péché brewed with lactose) is a favorite of mine last year. It held up just fine and still carried a nice creaminess. 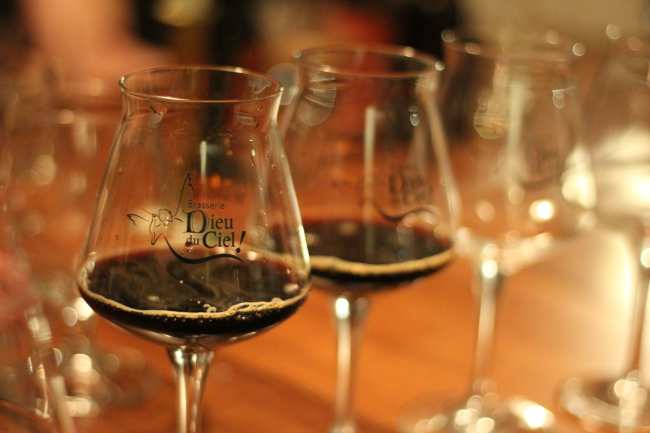 Next were the fruited Péché’s, which to be honest, I wasn’t huge on from the get go. The first time I had Peach Mortel, I thought it was fine, and a fun nod to all the anglos of the world that mistook Péché for peche. However, two years later none of us could take much more than a sip. It really dropped off the cliff. The nose on the raspberry was insane though, with a huge jammy explosion coming from the aromatics – more than I initially remember. It was still drinking well, but I find the berries add a certain medicinal element when combined with the bitterness of the coffee. The bourbon barrel aged raspberry was better, with some interesting vanilla accents complementing the fruit, but still not my favorite of the night by a long shot.

The theme so far at this point – for me at least – was that although Péché with some age on it is fine, ultimately the fresher the bottle, the better. However, Péché Bourbon proved something different. 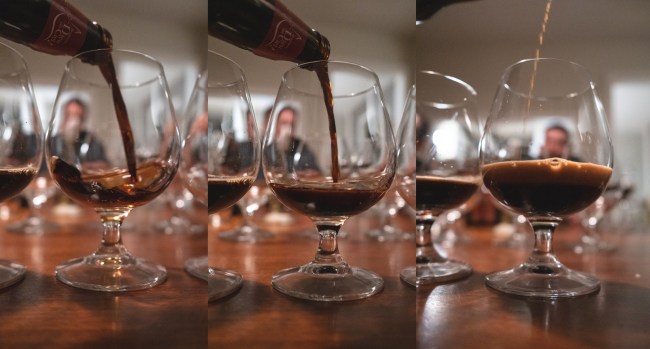 Next came the best part of the night, which was being able to side-be-side seven different versions of Péché Bourbon. It’s how I always envisioned heaven. So there was six different batches over 5 years (two in 2016) alongside the infamous double barrel Péché (Cognac and Brandy). We were expecting the 2013 to have dropped off, but the nose was spectacular, delivering the biggest bourbon punch of the lot, alongside some oxidized sherry notes on the palate – but still going strong. The 15 also had a nice blast of bourbon, but less of those aged fortified wine elements happening. The first batch of 16 was off. Could be a bad bottle, but it was an outlier for sure, delivering what seemed like a brett infection, carrying an almost tannic berry vibe – we were all on the same page with this one. The second batch of 16 was spectacular, and the 17 and 18 were great as well, with 17 falling a bit short compared to the latter.

The second batch of Péché Bourbon 2016 might have been my favourite of the night, showcasing just the right amount of bourbon notes alongside a solid and smooth sherry-like layer from the age, while not loosing the sharper dark roasted malts you want in an imperial stout.

Lesson of the night: your standard and adjunct-laden Péché’s are probably better fresh than aged, but your bourbon variants will be delicious for over half a decade – just find the sweet spot that you like, and dig in.

I’m just kidding, do you actually think I remember any of this?

Photography by Noah Forrest, Nathan Does Beer, and Hops and Bros.