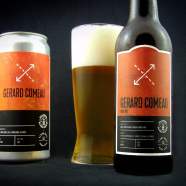 First and foremost, the idea was to brew an innovative collaborative IPA between two breweries that are very close in proximity but are actually located in difference provinces (one in Gatineau, Quebec and the other in Ottawa, Ontario). However, if the collaboration was brewed in just one location, only that one province would be able to taste it (given the archaic legal restrictions).

Instead, the two breweries decided to simultaneously brew the exact same beer at both breweries – an effort to cleverly distribute the beer in both provinces at once – perhaps as a symbol of the silly rules that restrict breweries from selling outside their given provinces. However, that’s not the only thing that makes this story interesting. The type of beer they chose to brew is something new to the scene, a Brut IPA.

This sub-style was created last November for the first time in San Francisco, but it has started to really blow up recently. The idea was to brew an extremely dry, clear, and aromatic IPA that carries a bright effervescence. Enzymes are added to the beer in order to help break down the sugars in a way that assists the yeast during fermentation. This gets the beer ultra dry. The name is a nod to champagnes that carry the name “Brut” to signify how dry they are.

Whether intentional or not, The style seems to be a response to the growing obsession with intense New England style IPAs and Milkshake IPAs that are extremely juicy, hazy, thick and sometimes sweet. I became quite interested in this new Brut style and actually helped brew one at Sutton Brouërie a few weeks ago. More on that that very soon.

First, I started with the Flora Hall version. The nose is dank and bright, with some candy-like zesty fruitiness. Guava, white grapes, and tangy wine aromatics come through as well. Up front on the palate it’s dry and crushable. The body is light and makes the beer incredibly easy to drink. As expected, the ethanol booziness comes through more given the lack of any sweet backdrop.

Lots of white wine-like grape flavours mix with tropical notes of papaya and passion fruit (although subtle). It’s extremely clean, but there is a lingering booziness to this that might be better if the ABV was scaled back. I love the tanginess from the Hallertau Blanc and, again, although the booze from the ethanol is aggressive, it does lend a sharp vinous character to the whole thing.

As for the Bas-Canada iteration, I get all the exact same notes, but I do find the booze-burn a little less pronounced and the mouthfeel seems a touch more robust. That said, I’m splitting hairs.

Overall my first Brut experience has been a positive one. I’m very excited to try all the other brewery’s takes on this emerging style.