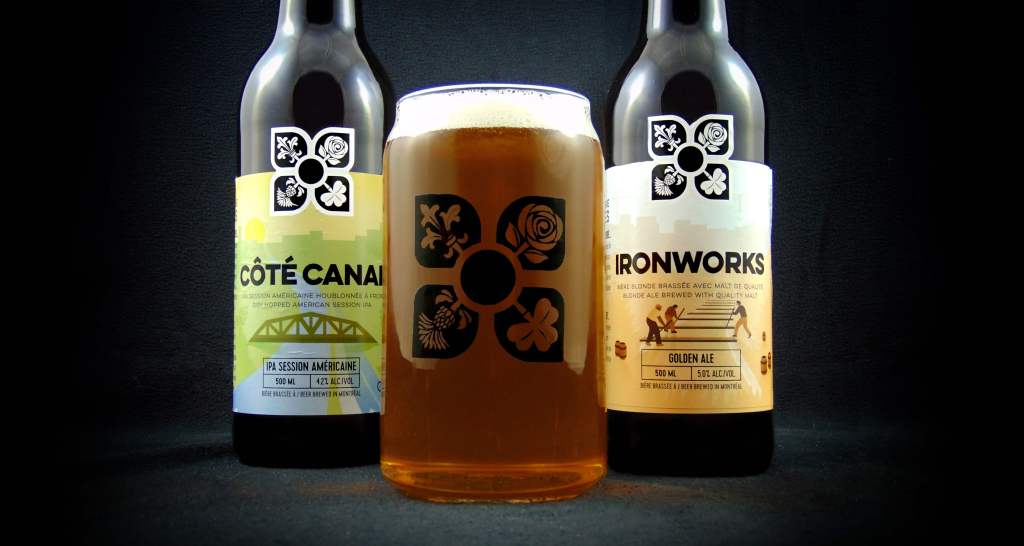 Microbrasserie 4 Origines opened its doors in April this year, but they are already starting to garner a reputation for quality beer. Located at the eastern tip of Point-St-Charles, patrons can have a beer in their beautiful tap room, or purchase bottles and cans to go. They are currently producing accessible, well-made beers that are complex but also easy to drink. I spent some time there last month – I was impressed.

I first met Michael D’Ornellas (co-owner) back in 2013 when he was an avid and prolific homebrewer working under the name Beer Addict-Ed on social media. I attended a few events at his Place St. Henri apartment, where we would do blind tastings of his work, or simply just drink all of his home-brew. 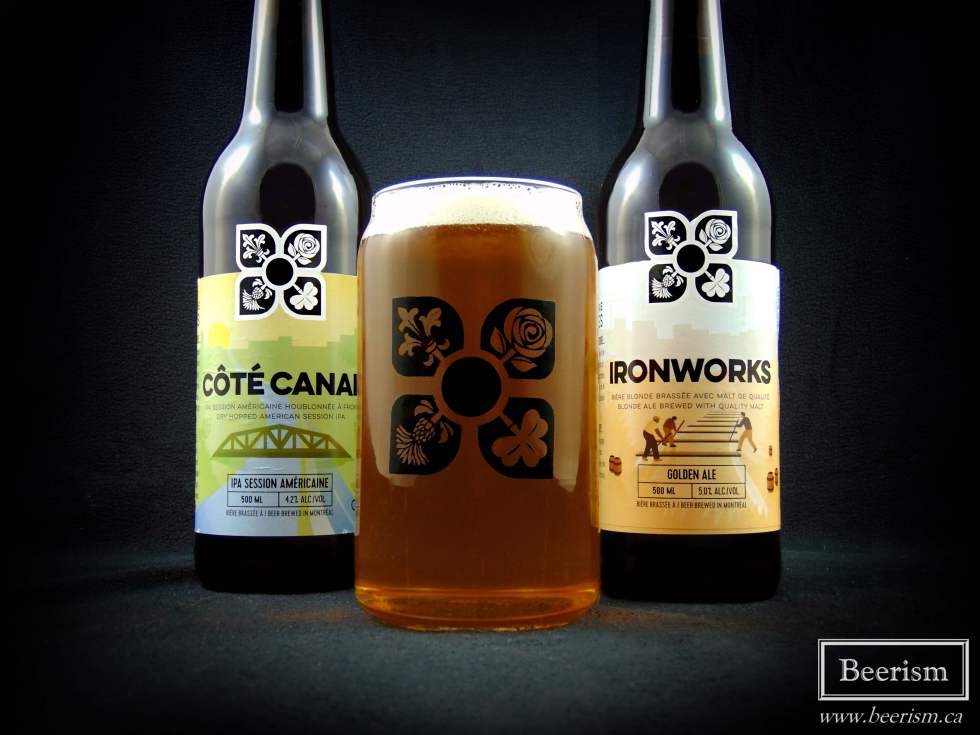 Michael was exceptionally passionate about brewing. So much so that I always knew he would open a brewery – he wasn’t just another home brewer who talked about it, but never acted. He was serious, and his desire just seemed bigger than him.

His beers had a way of combining classic drinkability with innovative (and sometimes bizarre) ingredients. But he always made it work. I remember my eyes rolling a bit over his Oreo cookie stout, but I was in love shortly after it hit my lips. (I talked about several of Michaels beers in a post from four years back. You can read it here if you’re interested).

Microbrasserie 4 Origines is the brain-child of three partners: Michael D’Ornellas, Keegan Kelertas, and Benjamin Somers, as well as their head brewer Braden Richards. The idea and the branding behind the brewery stems from the four founding brewing countries to settle in Montreal; Scotland, Ireland, France and England. Each is represented as a flower in their logo, and when combined, they create a fifth flower representing today’s Montreal. The gentlemen behind Microbrasserie 4 Origines wanted to celebrate the brewing history of Montreal, and beer itself.

After tasting what they’ve produced, it seems to me that their focus (from a beer standpoint) is centered around quality and drinkability. They opened their doors with a session IPA, a golden ale, an English brown ale, and an apricot tea-infused pale ale. In today’s current beer-trend climate, which is largely driven by juicy and hazy IPAs, aggressively-sour ales, and adjunct-infused monsters, these four beers are far from “exciting,” landing closer to the classic, more-approachable side of the spectrum. The thing is though, as much as people still want to be punched in the face by their beers, drinkability itself is trending, with more and more beer-geeks coming full circle, rediscovering how valuable the simplicity of a balanced, well-made beer can be – and Microbrasserie 4 Origines has nailed this.

I got my hands on five of their beers in order to tell you all about them. Let’s get to it!

Côté Canal is a “dry-hopped American session IPA.” It pours out a rich golden colour, with lots of red highlights. The nose is a bright and slightly dank citrus bomb, carrying light grassy funk and a touch of pine. It smells fresh, accessible and downright delicious.

The palate matches, delivering loads of citrus, with grapefruit at the front. Strawberries and light passionfruit come through as well, alongside some pine and grassiness. The finish holds that quintessential West Coast-esque aggressive bitterness, but it’s balanced well enough against everything else. And, instead of a caramel-forward malt base, this is all fruit, with slight biscuity undertones. Super solid.

Côté Canal provides a desired drinkability without giving up all the malts. Yes, it’s just over 4%, so there is a wateriness to the finish, but the body is robust and there is a layered complexity to the hop-forward flavour profile.

Caffeined is a coffee infused stout with lactose. The nose is a blast of coffee, carrying earthy and rich espresso layers. There is some nice chocolate happening as well alongside light caramel in the background

The palate matches, delivering rich and robust coffee layers, but the bitterness is kept in check, making for a round but dry finish.

Cocoa, espresso, dark fruits and lots of fudgy components make out the profile, finishing very dry, yet still round and not resinous in the least. Coffee stouts usually carry an aggressive bitterness, but this is exceptionally balanced and easy to drink. Delicious.

Ironworks is a “Golden ale made with quality malts.” The nose carries a bouquet of herbal hops, with a slight earthiness to it. Some light bready malts and subtle fruity yeast esters round out the rest of the aromatics.

The body has a lovely creaminess, while being very drinkable all around. Again, like the nose, you get some hop forward herbal and spicy notes, lending an earthy and tangy layer. It’s crisp and clean, appealing to those who like lagers, but with a touch more fruitiness from the esters.

Although by today’s standards calling this beer hop-forward would be an odd thing to say, but there is a bite to this one that lets it lean just a little towards the hoppier side of things, but nowhere near even the more approachable IPAs. You still get some honey maltiness, but it’s clean and very dry.

You couldn’t hide imperfections in this beer, and there are none to be found. It’s summer in a bottle and perfect for any occasion. 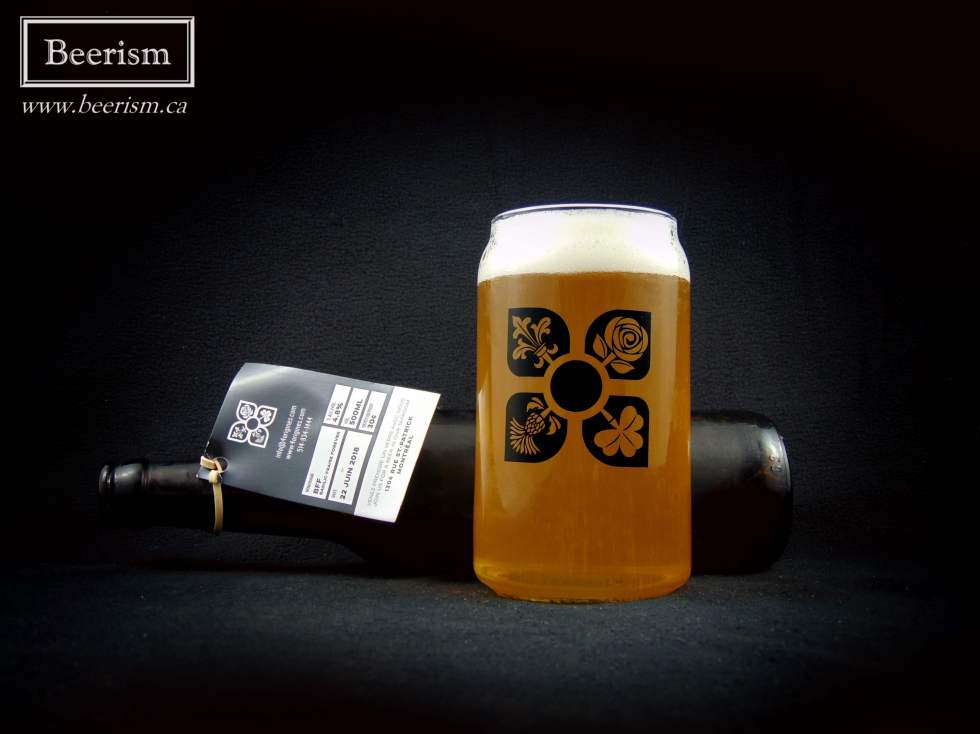 Basilic Fraise Forever is a basil and strawberry infused kettle sour brewed in collaboration with the guys from Avant-Garde Artisans Brasseurs.

The palate matches, with some pristine balance. There is a tartness, but it’s not aggressive, and more on the tart side of things. The strawberry is barely there, just adding slight jammy layers and a sweet accent to this dry beer. The basil is not to be found.

Overall I quite enjoyed this, however for a beer that has strawberry and basil as part of its name, I’d like to have been able to taste it much more. 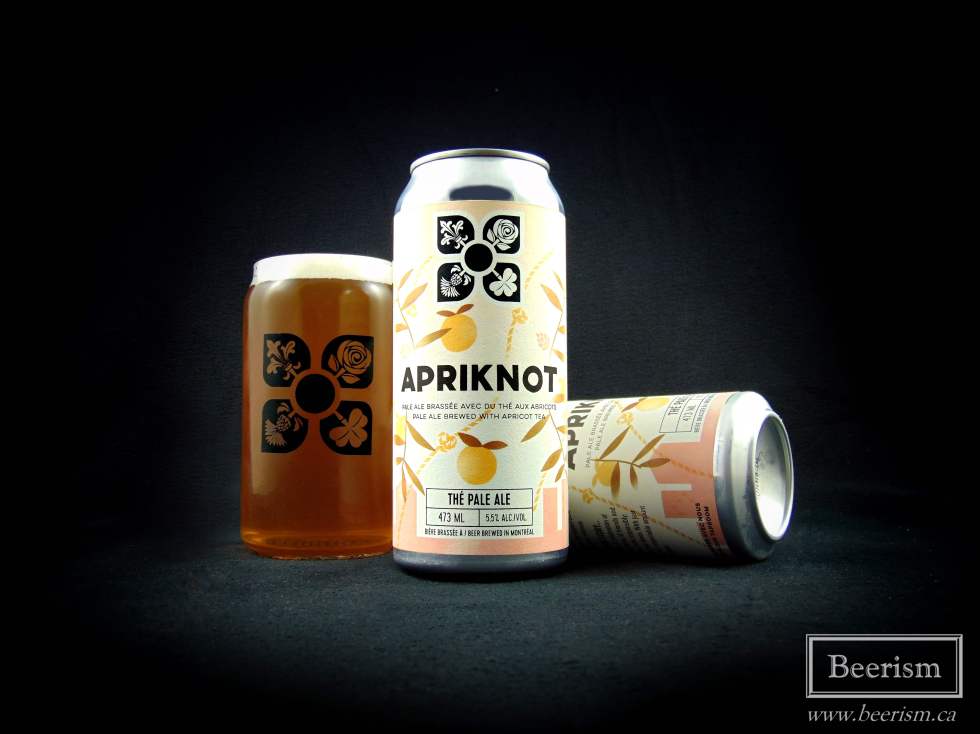 Apriknot is a “pale ale brewed with apricot tea.” The nose is a subtle mix of earthy notes, alongside an essence of apricot, and some fruitiness from the hops. Light floral pieces come through as well, adding some layers to the otherwise pretty unassuming aromatics.

The palate begins with a tangy and fruity hop profile that immediately blends with the present but subtle apricot tea component. The fruit layers are interesting, with some tropical and herbal notes from the hops, mixed with that floral and apricot-forward tea element. The finish is clean, but also carries a hefty bitter kick that lingers alongside layers of grainy malts.

Overall (like all the beers so far) this is a well made and balanced beer that you could easily have several of. The use of the tea is a nice compliment to everything, lending a subtle fruitiness that never overpowers, and leaves no astringency. What’s left is a complex crusher that you could drink all day.

I highly recommend heading out to Microbrasserie 4 Origines. That said, don’t expect intense hazy IPAs or mouth shattering sours (at least not yet). As I said before, the gentlemen behind this brewery are offering very accessible and well balanced creations that can be examined for their complexities, but more importantly, they are fun to drink and go down easily.

Shortly after they opened, I had a chance to co-host an episode of the BAOS podcast, where we interviewed Michael and Braden from Microbrasserie 4 Origines. Check it out!