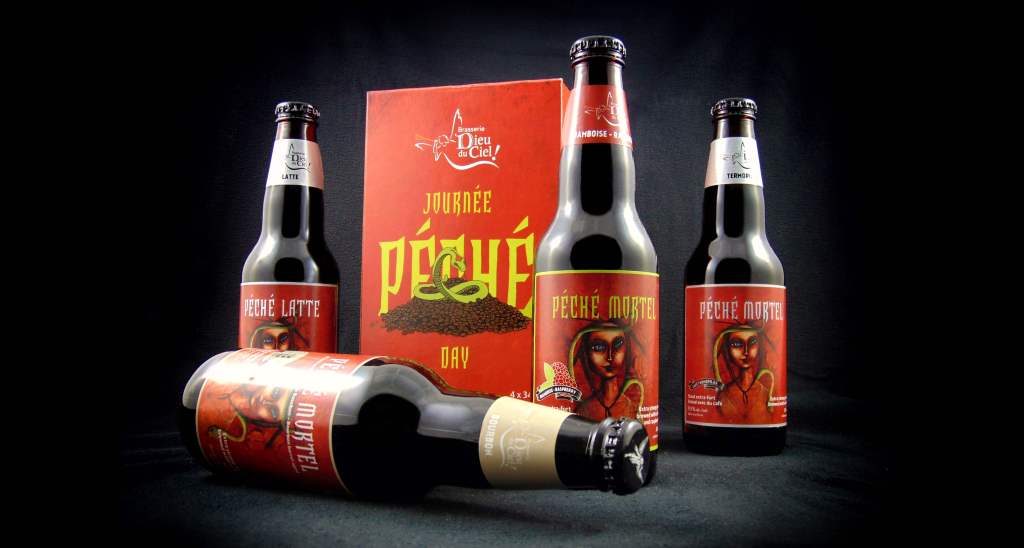 It’s February, and the cold has been around so long now that my anger has transformed into a form of cold-complacency. It’s depressing, demoralizing, and I want it done with! Luckily, it is also that time of year where imperial stouts are found in abundance. And more specifically, Péché Day is on its way!

For those unaware, Péché Mortel is Brasserie Dieu du Ciel!‘s imfamous coffee infused imperial stout. It is well respected, world renowned, and simply one of the best of its kind. For several years now the brewery has celebrated the beer by giving it its own day. Many bars from all over Montreal, Canada, and the entire world will be pouring different variants of this epic beer.

To add even more wood to this fire, Dieu du Ciel! is reprising their Péché Day mixed pack from last year with a whole new set of Péché variants for us to pour down our frost-mangled throats. Like last year, the infamous Péché bourbon is included, as well as three never before bottles versions: Péché Framboise, Péché Latte, and Péché Termopilas.

Distribution of the Journée Péché 4-packs will begin on Péché Day (March 24th) , so keep an eye on social media to see which stores around Quebec are receiving them. I was able to procure a case ahead of time to tell you all about these luscious bottles. Enjoy!

This first new Péché variant is brewed with Termopilas Coffee beans, which were used to provide a lighter roasted profile than classic Péché Mortel. In last year’s Péché case, they did something similar, using a coffee called M’Beguka from Kenya.

The nose carries a huge mocha-coffee presence – a touch more apparent than usual. Lots of dark chocolate comes through, but with a nuttier edge, showcasing that quintessential third wave roastiness. Some dark cherry comes through as well, but this nose is all beans.

On the palate the coffee is that much more in your face, with an intense bitterness to cut through everything. It feels like Péché turned up a notch, with an potent espresso intensity.

Bitter dark chocolate mixes with freshly pressed coffee, alongside some fudge and a light fruity acidic backing. Overall it’s sharper in bitterness and alcohol as well as seemingly a touch thinner. This sounds negative, but it isn’t – at all. Péché Termopilas is fucking delicious.

Péché Latte is essentially a Milk Stout or Sweet Stout version of Péché Mortel. This is done by adding lactose which creates a more robust and slicker mouthfeel alongside some extra sweetness. Lactose is all the rage now, so it only makes sense that they created this. I’m normally not a fan, but it is Péché after all…

The nose is rich and lovely. It has that very typical Péché coffee excitement, but with a softer and rounder sweetness alongside some mocha and milkshakiness – but subtle.

Okay, I’m converted to lactose from this beer alone. The body (as expected) is through the roof with a brilliant lusciousness. The lactose thickens it up, but the coffee bitterness really helps keep it all in check. It’s certainly sweeter than standard Péché, but again, the dark roast really balances everything, creating that quintessential latte delisciousness. Lots of milk chocolate and cappuccino-like richness rounds the whole beer, turning one of the best beers in the world into something different yet equally brilliant and delicious. Wow, I want more.

As usual, all of us beer-geeks are ecstatic with the idea of landing some Péché Bourbon. So, for those that could not attend the recent winter bottle release, this Péché Pack is a great way for folks to get their hands on the latest batch. I reviewed it a few weeks ago, so I thought I’d include my tasting notes right here:

The nose is the usual Péché bourbon masterpiece, however the rich vanilla bourbon notes seem a touch more pronounced, with sweet oak forward aromatics at the front. Rich earthy coffee beans comes through as well, alongside loads of milk chocolate. The nose is divine.

The palate is a big burst of coffee, lending dark chocolate and freshly ground espresso beans, mixed-in with vanilla and spicy oak tannins. The effervescence feels a bit more prickly on the tongue this year. It’s very bitter, tannic and dry (perhaps more than usual), while still being rich and round overall. Bitter dark chocolate components work extremely well with the luscious vanilla-forward bourbon notes, while the alcohol is sharp, but balanced. Péché bourbon is always a treat.

Last we have Péché Framboise. Yes, that’s right, they brewed Péché Mortel with Raspberries. Last year Dieu du Ciel! created Peach Mortel, which was a play on the fact that anglophones kept getting mixed up over the word Péché (thinking it means Peach). Despite it being more of a joke than anything else, the beer was quite brilliant. So needless to say I’m excited for this one.

The raspberries are less apparent than on the nose, but instead provide a light compliment to the coffee layers. That said, the tanginess and tannins from the fruit clash a touch with the bitterness of the coffee, presenting a certain astringency in the finish. That said, I do very much enjoy raspberries and chocolate together, so this is essentially that combination in beer form.

Bakers chocolate, bright berries and espresso make up the flavour profile, pushing the boundaries of what Péché Mortel can be. Although enjoyable, I find this Framboise iteration too bitter overall. It is my least favourite of the case, but that’s also like choosing your least favourite Ferrari.

So, just to remind you again, Péché Day is on March 24th, 2018. Pay attention to the Dieu du Ciel! Facebook page in order to get all the details. The Péché 4-packs will also be sold on the 24th of March, so keep an eye on your local shop.

This year’s 2018 Péché pack selection is certainly a step up from the 2017. Although I preferred last year’s Peach Mortel to this year’s Raspberry, Termopilas and Latte were just amazing. And well, Péché bourbon is always king. I’m already thinking about what next year’s will be, drooling at all the possibilities.