As much as one can say that label art shouldn’t effect how we choose a given bottle of beer, it certainly still does. This is especially true for individuals who are first discovering craft beer (or any product, really). If you don’t know what you’re looking for, you’ll often end up buying something that visually appeals to you. That said, even seasoned beer-geeks are still influenced by labels. There is just something about presentation that seduces us all. However, if the beer inside the bottle is sub-par, then no matter how sexy that label art is, I’m not going to be buying it again. 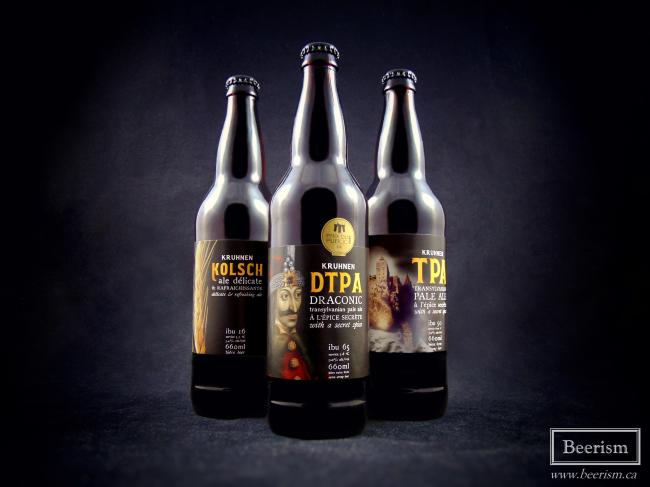 Microbrasserie Kruhnen has been on the scene now for many years. I’ve always enjoyed their products, but it’s been a while since I’ve revisited. Owner and head brewer Ovi Bercan has brought his native Romanian brewing style and tradition to Quebec. Most of his beers contains a signature “secret ingredient,” which imparts a almost herbal aromatic experience that’s hard to place. Ovi’s beers are well balanced and always drinkable, carrying a subtlety that still lends a robust and rich flavour profile.

One of the reasons I wanted to revisit Kruhnen is because they just went through a recent re-branding – I wanted to get these new sexy bottles into my photo-box. Their new labels were illustrated by Lance Bercan, the brewer’s son, and redesigned by David Atman, one of the brains behind La Décapsule and the awesome new (100% Quebecois) board game Divago. With that said, let’s get to re-discovering these Transylvanian elixirs.

TPA (or Transylvanian Pale Ale) pours out a rich mahogany colour with lots of orange highlights. The nose is a subtle blend of spices, mixed in with some estery aromas and a sweet malt backdrop. Herbal and juicy hops come through as well, providing some layers to the aromatics.

Up front it’s much drier than expected, given the sweetness of the nose, carrying a rather bracingly bitter finish. The rich malts do come through though, mixed with an herbal spicy note from the “secret ingredient.” But again, everything is cut down quickly in the finish, making this quite clean overall.

The mouthfeel is creamy, carrying a head that literally never dissipates, just sitting there like a frothy cloud. The balance is on point, with some nice caramel maltiness, mixed with subtle fruity esters, piney hops, and herbal notes (think Gruit, but actually good, unlike most Gruits). The finish is potent, bitter, and cuts through everything. 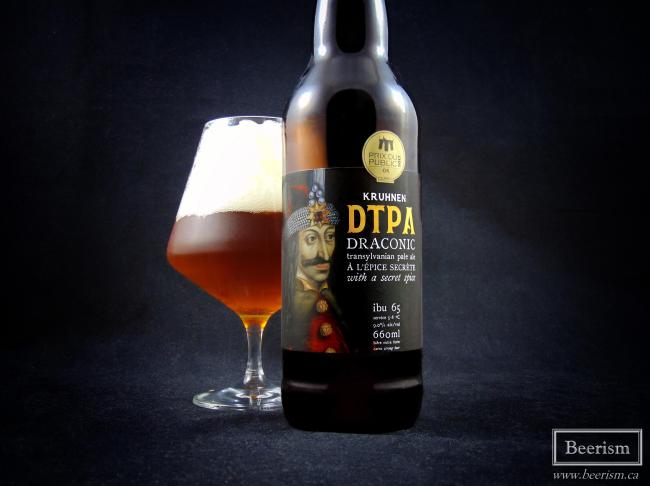 DTPA (or Draconic Transylvanian Pale Ale) pours out an orange brown colour, carrying a huge frothy head. The nose begins with some dusty phenols, alongside spices, like juniper berry and general herbal notes. These spicy aromatics blend with rich caramel malts and some hop infused fruitiness, which lends citrus, pine, and damp grass.

The palate matches the nose, but is more restrained and impressively balanced. Like the TPA, there is an amazing fluffy mouthfeel which is impressive given its density. It begins with some malt-forward flavours (rich in caramel and vanilla), but is then quickly cut down by some herbal tea-like spiciness and an aggressive hop-focused bitterness. It’s very dry, but also nicely rounded. For a beer that is this this big and is this spice-infused, it drinks exceptionally clean and goes down super well. That said, there is a lingering and resinous bitterness that rests on your palate after each sip, echoing the hops that just left you.

This is Krunhen’s interpretation of a double IPA. If you go and buy this, you need to go in knowing just that; this is their version of a DIPA. This doesn’t mean it’s bad, it just means that it is not a juicy hop bomb by any stretch. If I drank this blind, I’d probably classify it as some kind of imperial Gruit. That said, I generally dislike Gruits, but I actually really like this beer. So don’t let that deter you.

Kruhnen’s Kölsch pours out a clear tan colour, with a small little head. The nose is a nice mix of sweet honey, with a little mustiness. Oats and wheat are poking through as well, with some light herbal notes in the background.

Up front the palate matches. Lots of honey and freshly harvested cereals dominate the profile, while slightly tangy and herbal hop notes come through as well. That said, the hop profile is soft and not aggressive in the least. Some peppery notes come through as well, and linger a touch in the finish, which is incredibly clean. Everything is in balance. It’s a solid Kolsch overall.

I think that sometimes in a sea of double dry hopped New England IPA’s and coffee infused bourbon barrel aged imperial stouts, I can loose track of breweries that are producing quality beers. In the constant epic search for what’s new, it was nice to revisit a brewery’s base line-up that I respect and enjoy quite a lot. If you are looking for something classic but still different, check out what Kruhnen has to offer.