Summer is finally taking hold of Montréal, or at least we can hope. I was recently on vacation and the weather was garbage for the most part. That said, the colder temperatures allowed me to kill off a few imperial stouts. However, I think many of us are looking forward to more sunshine.

Along with the summer heat comes an array of beers to assist in quenching the collective thirst. Session beers, tart Saisons and fruited sours have been the trending summer styles over the last few years, and this year is no different. However, you’ll probably want to tack-on the extremely popular North-East IPA’s and Milkshake IPAs for the 2017 seasonal trends.

As you are likely aware, about twice a year Brasserie Dunham throws a bottle release at their brew-pub in the eastern townships. It’s an event that allows the brewery to showcase all of their new creations. This year, they added an extra small release during the winter, and now they are doing the same this summer! That’s right, if you went to Dunham this past Saturday, you’d have been able to grab an array of delicious summer beers to help you get through the heat. My apologies for not getting this post out ahead of the release, but time constraints caused a delay. Several of these beers should still be available in Dunham, however some have certainly sold out. As well, some retailers will be carrying these bottles, including Maltéhops in Verdun who received a few of them yesterday.

As usual, Dunham had an extensive number of bottles to purchase, with a particular focus on styles that match the summer season. I got my hands on five of these thirst quenchers in order to tell you all about them.

A few weeks back, I was in Dunham and had Bière de Table on tap. I thought it was stellar. When I found out that bottles would be sold, I was pretty damn excited. The nose is a lovely and subtle mix of bretty funk alongside light lemon-like acidity. It is simple but complex, carrying stone fruits and hints of spicy phenols.

The flavour profile is similar, beginning with notes of dusty barnyard and a very subtle but still apparent acidity. This lends a citrus-fruit component, adding lemons and grapefruits in particular. The finish has a long and lingering lemon/grapefruit rind complexity that really appeals to me. It’s crazy dry, and goes down like water. I could drink this all day long.

This beer might not impress all the beer-geeks, as it’s extremely subtle and even a tad watery. However, that’s what makes it brilliant. Packing this much complexity and downright deliciousness into something that goes down like water is a truly difficult thing to pull off. I Love this beer.

This is the fifth installment from the Dunham’s Berliner Weisse series. This particular iteration was brewed using passion fruit. I can’t wait to get my tongue blasted.

The nose is a gigantic passion fruit bomb, throwing out juicy and acidic aromatics like a delicious tropical bonanza of zestiness.

On the palate it’s extremely acidic, but with a massive juiciness from the fruit that helps balance everything. The passion fruit is incredibly apparent, more than all the other fruit variants. The tangy tartness reminds me of eating a fresh passion fruit, but with that lingering Berliner acidity, making the experience that much more intense. This one may be my favourite version yet. That said, it’s not for the faint of heart, as the acidity is through the roof. Be prepared!

Quench de Soif is a collaboration between Brasserie Dunham and Twin Sails Brewing out of British Columbia. The name is a jab at all the American breweries who use french words in their names in order to come off sounding more sophisticated. It’s a wild IPA, carrying a hop profile inspired by the Vermont scene.

The nose is a mix of big juicy hops alongside some earthy brett funk. Mango and apricots join forces with dusty phenols to create an overall bright and complex nose.

The palate is a similar cornucopia of flavours, offering ripe mango flesh and mandarins. It carries a robust body, with a nice richness, while still being very dry and extremely drinkable. I love the balance of this beer; it has a certain light sweetness, but the brett phenols mix with a restrained hop bitterness – keeping everything in check. It is like drinking the juice right out of a fruit cup – minus the syrup. Great stuff. 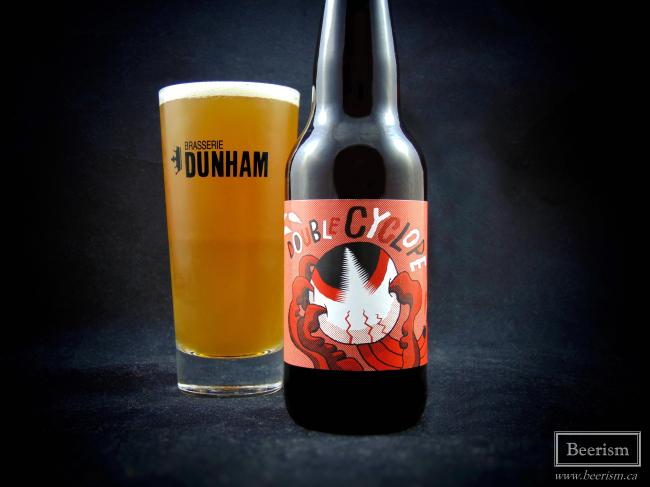 The Cyclope series has been happening for a few years now. It’s basically a line of IPA’s that carry a varying hop profile from batch to batch. This however, is the first time Dunham has bottled a a Double Cyclope. I won’t lie, I’m a bit excited.

Double Cyclope pours out a murky bright orange colour with some copper highlights. The nose is a rich hoppy mix of overripe stone fruits, orange zest and some grapefruit juice.

Up front, the alcohol is very present for an 8.6% double IPA, which lends a sharp, somewhat astringent layer. The hop fruitiness come through, but not as much as on the nose. Orange pith, ripe clementines, bitter grapefruit, and apricot mix in with the boozy base. The finish is aggressively bitter, with a sharp and intense linger from the ethanol and the hops.

Overall, this beer isn’t doing it for me. It’s too boozy, sharp and bitter. That said, I think it’s more my tastes than anything. These days, this type of double IPA isn’t really my thing. If you’re a fan of Immorality from Dieu du Ciel! or Double Fruit Punch from Vox Populi, then I recommend seeking this out. However, if you are searching for Super A from Auval, or something on the “NEIPA” spectrum, this might not be for you. 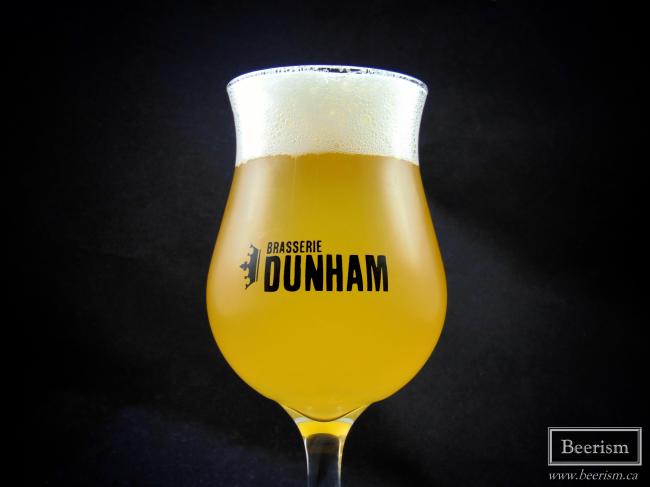 This Grisette was brewed in collaboration with Oenopole, a wine importation agency who specializes in in small batch, easy-drinking wines.

The nose is a perfect mix of citrus zest and phenolic yeast dustiness. Earthy grass and underripe tangerine mix with a lemon essence.  As it opens more, stone fruits and lots of floral notes emerge to complete the bouquet.

On the palate there is lots of that tangerine citrus zestiness, with a dusty and dry yeast presence, finishing with a soft creamy mouthfeel. A light tang lingers, reminiscent of citrus acidity. Then, some hop components lend a fruity character to this refreshing, easy-drinking, while still complex and spectacular beer.

As usual, Dunham continues to impress. This can be applied to the amazing subtlety behind their Bière du Table and Grisette, or the downright mouth-shattering intensity of Berliner Passion Weisse. And although their hop game can be hit or miss at times, I thought Quench de Soif was a brilliant Wild IPA. Congrats on another success release!

← Ultra Mosaika from Dieu du Ciel! is Here to Save Us Microbrasserie Labrosse – The West Island Finally has Beer →