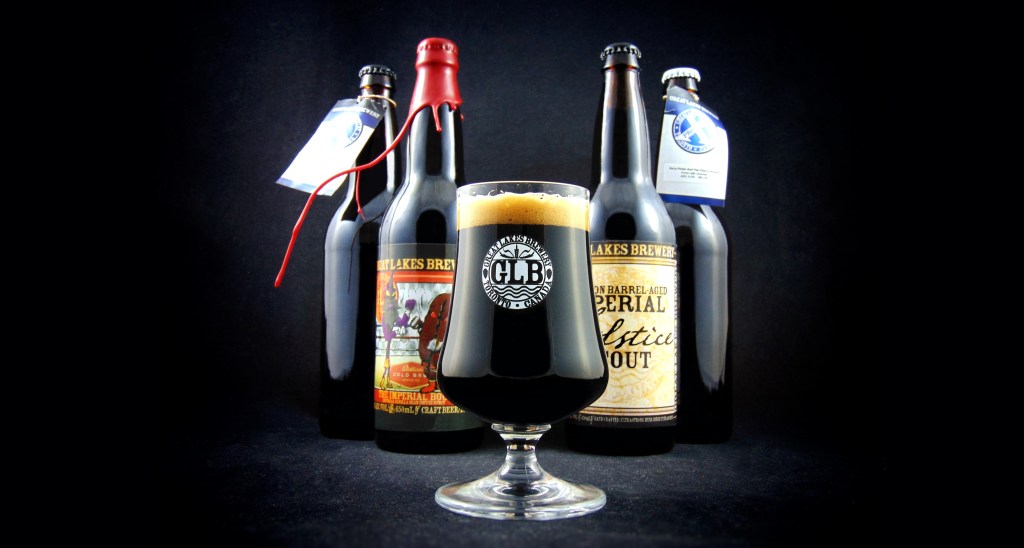 Toronto’s Great Lakes Brewery has just celebrated their 30th Anniversary! This is a massive milestone in the craft beer community, making them one of the first craft breweries in the country. I’ve written several articles about GLB at this point. Generally, they have all centered around the pretty magnificent hopped up beers that they offer on the regular. That being said, they have also been pumping out some interesting and decadent darker libations, and several of them have sparked my interest.

With the New England IPA craze in full swing around these parts, I was glad to see GLB lending some of their time and space to beers that fall outside of the hop-forward realm. Don’t get me wrong, I enjoy and pretty much love all of their IPA’s, but I also think the “haze-craze” is taking over social media right now, so I’d like to darken things up for a moment. That’s not to say stouts don’t also hold a certain hype factor in the beer scene, but not nearly to the degree that those juice-bombs do.

My love affair with coffee certainly helps compliment my equally strong attraction to black beers -especially imperial stouts. Their luscious and silky bodies that carry bold, rounded, and roasted flavours, get me every damn time. Throw it in a bourbon barrel and you really have me. I’ll even drink them in the summer heat, it doesn’t matter.

That being said (like many beer styles), if they they are done wrong, it can be a pretty bad experience. Too much sweetness, a thin body, or just too boozy can throw you off completely.  However, knowing GLB’s track record, I don’t expect this.  So, with that said, I’d like to dive into a few dark and wonderfully roasted GLB beers. 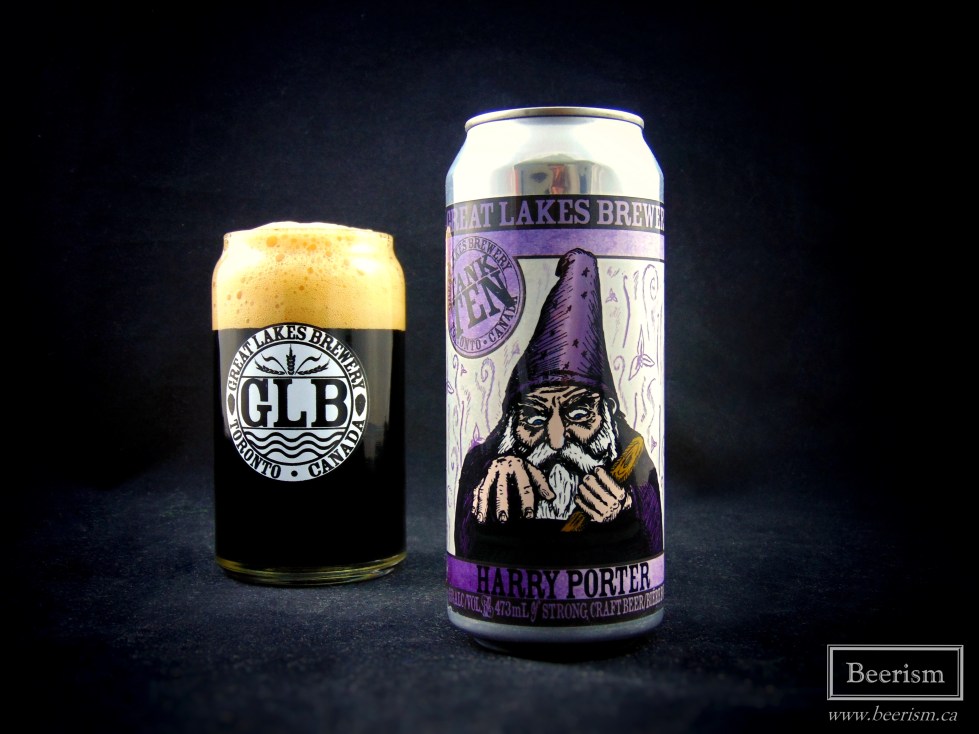 Harry Porter is not a new creation, but it’s actually the first time I’ve had it.  The nose wafts some coffee and dark chocolate notes, coupled with subtle fruity hop components. Next comes a bit of caramel, alongside minor earthy yeast aromatics.

Up front, it’s fruitier than the nose let on, with dark fruits coming in alongside the heavily roasted malts (I can see why they decided to do a Cherry infused variant). As it should, this porter carries the usual coffee and dark chocolate notes, lending a nice dry bitterness. The finish is clean, with a light lingering char, coupled with some deep fruitiness. It’s bone dry and extremely drinkable, with an overall balanced base. I would buy this often if it was available on the LCBO shelves.

Harry Porter and the Cherry Hoarder

As you might presume, this is a cherry infused Harry Porter variant. One of several variants that the GLB team has released lately. The nose carries loads of cherry-filled delights that are quickly complimented by some dark roasted malts. Cocoa powder, coffee beans and slight fruity hops combine with everything nicely, creating a rather inviting nose.

This drinks pretty light in comparison to regular Harry Porter, and the cherry presence is far less aggressive than the nose let on. This, however, is a good thing, allowing the Porter base to shine, with echoes of cherry flesh in the backdrop.

Cherry hoarder is extremely drinkable, with a slight acidic fruitiness that makes it pretty crushable. There is that delicious cherry pie thing happening (which carries a bit of jamminess), and the coffee and chocolate notes are apparent, but less pronounced than the regular version. The light body works well with the cherries, making for an easy drinking, roasty ride. Great stuff! 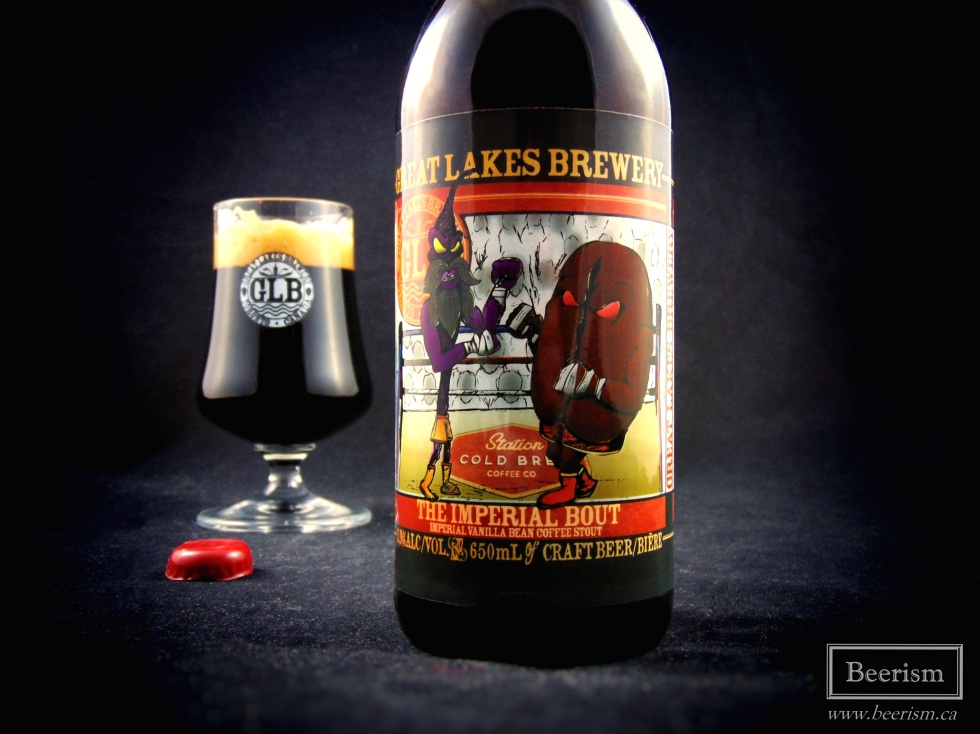 The Imperial Bout is a coffee and vanilla infused Imperial Stout. It’s been sitting in my cellar for a year, so I figured it was time to crack her open. It pouts out jet black, carrying a lightly tanned head. Loads of coffee and Milk chocolate make up the nose. There is an almost a candy-like sweetness happening, reminiscent of whoppers (if you don’t know what they are, click here). Toasted almonds and vanilla arrive next, alongside caramel and maple taffy.

It’s nice and dry up front, with a hefty coffee bitterness in the finish, which manages to cut through everything. The body is robust, but the finishing linger is on the lighter side. I wonder if the year in the cellar thinned this out a little bit too much. Like the nose, there is ample chocolate goodness, with an impressively aggressive coffee presence that I quite like. The high ABV is well hidden, without much sharpness considering how dry it is.

There is also that chocolate candy, whoppers thing – although less than on the nose. That being said, I find it adds an odd quality that I don’t love. Sadly I never tried this fresh, and I think it was likely better when first released. That being said, it’s still a solid beer, with interesting complexities. 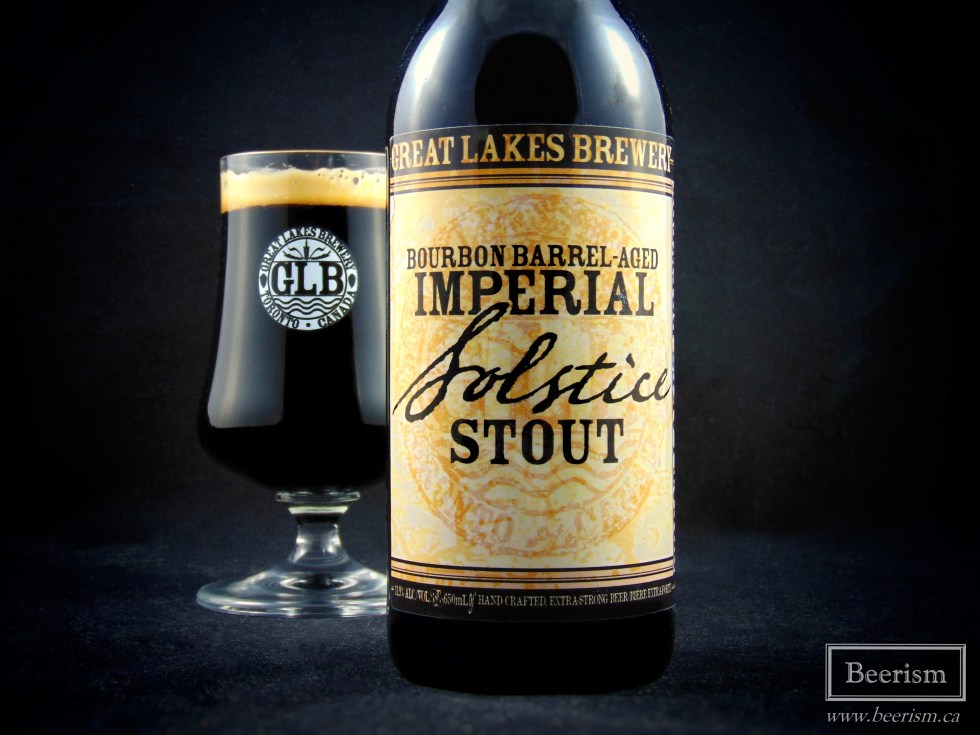 Solstice Stout came out about a year ago, and I’ve been patiently waiting to get hold of a bottle. Luckily my patience paid off, and it’s time to crack open this luscious 11.9% bourbon barrel aged monster.

It pours out extremely dense, with a dark tanned coloured head that looks thick and pudding-like. The nose wafts a beautiful mixture of doughy malts, chocolate candies, light coffee, and lots of dark fruits. Some vanilla comes through as well, throwing bourbon soaked wood at my senses.

Up front there are lots of malty chocolate flavours that meld right into the bourbon barrel vanilla goodness that arrives next. There is far less fruit than the nose let on. Instead, oak, dark roasted coffee and coco lead the way. The oak is pretty intense here, maybe a bit above average. It’s also quite possible that the year in storage has allowed this component to grow. Although the aromas made this seem like it would be a tad sweet, it is perfectly dry, carrying a nice espresso-like bitterness that keeps everything in check. The finish is long, bitter and dry, with echoes of chocolate and bourbon.

In a sea of juicy haze, it was nice to fill my belly with loads of dark roasted loveliness. This was especially refreshing coming from brewery that usually tantalizes my senses with their hops and not their dark malts. I look forward to drinking more of their darker offerings, and I’m particularly excited to try the 30th anniversary Pinot Noir barrel aged quad that just came out.