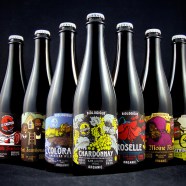 Posted by beerism on November 22, 2016 in Beer Reviews | Leave a comment

Over the last few years, Microbrasserie Le Castor has managed to carve itself a spot as one of the best breweries in Quebec. Their popularity first exploded when they released their flagship IPA, Yakima, which at the time was probably the only solid American IPA in the province. Years later it still stands tall against anything new that hits shelves. While their lineup diversified, it generally stuck to more “traditional” contemporary craft beer offerings.

That being said, over the last year and a half, things have changed. Le Castor still produces their main line-up of hoppy, American style ales. However, like me, it seems they have fallen in love with brettanomyces, producing beer after beer that showcases this lovely yeast. If you are unfamiliar, brettanomyces (or brett) is a wild and aggressive yeast strain that has taken the craft beer world by storm over the last few years. Depending on how it’s used, it imparts a multitude of flavours and aromas. 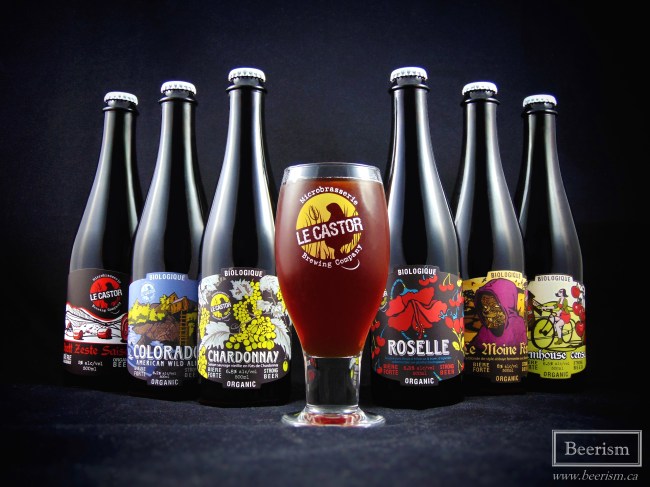 If brett is used as a primary fermenter, then the flavours are more subtle, carrying slight mineral-like compounds, bright fruity esters and minimal phenolics. When it’s used as a secondary fermenter, there are more “funky” aromas and flavours that arise, producing phenols that can taste and smell like dust, damp basement, barnyard, and even horse blanket.

When coupled with barrel aging and souring bacteria, the yeast presence gets even more complex, showcasing a wondrous world of flavours to be discovered by the lucky person who happens to be drinking it. For those who have never tried bretted beers, I know this all sounds a bit odd. But the bottom line is this, what you should expect from beers fermented with brettanomyces is that they are generally very dry, earthy, aromatic, often delicate, and when done right, quite delicious.

In summer 2015, Le Castor released Farmhouse Houblon, a hoppy saison that was re-fermented with brett. It was stellar. Since then, the brewery has really embraced the farmhouse ideology and bottled new beer after new beer, each showcasing brettanomyces alongside a multitude of other adjuncts, brewing methods, and barrel aging. 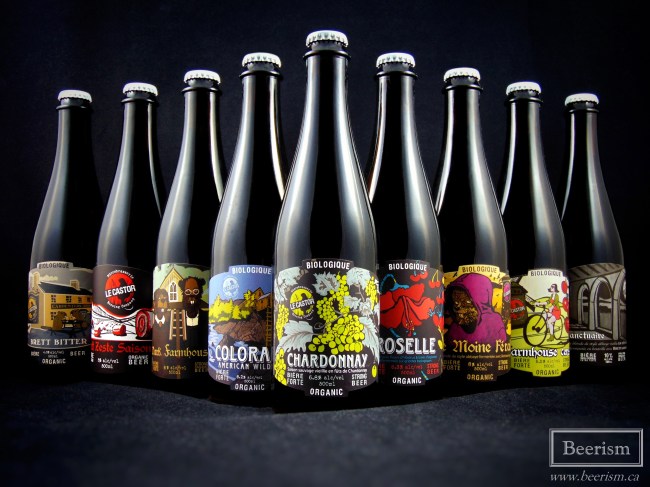 Today, I’m going to talk about six of these wonderful offerings, but before that I want to briefly touch on something else. Often within this province (and outside Quebec as well), when quality fruited sours, barrel-aged beers, or special editions come out, they are produced in very small numbers. They are sold only at the brewery, and they run out quickly. This causes us beer geeks to seek them out that much more. Online trading forums light up with people pushing these bottles, which are viewed by a larger audience, and then hyped even more.

With this in mind, the demand can (at times) end up defining the quality of the product, which means that the quality is often (but not always) based on the amount of beers produced. You with me? So, often this means that us beer geeks buy more bottles of a beer produced in smaller quantity than those produced in higher numbers, although being of equal quality. 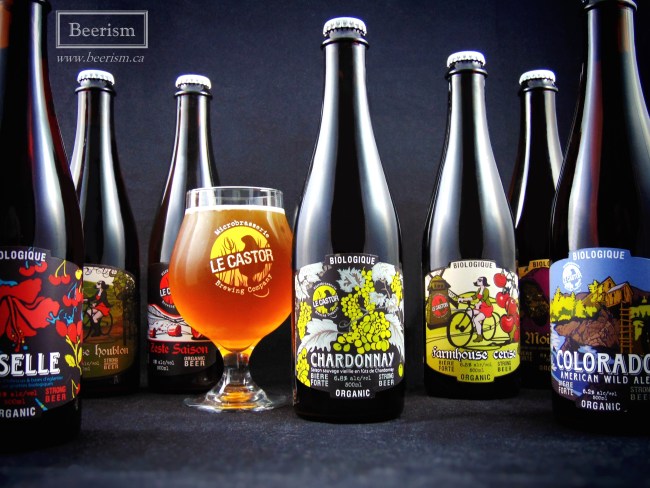 Don’t get me wrong, the beers that are most sought after are generally amazing and deserve our worship. Smaller production runs can also allow the brewery to adhere to stricter brewing practices and better ingredients. That being said, Le Castor manages not only to send their limited edition beers all over the province in high numbers, but they are also exceptional products. And yet their beers often don’t sell out for quite a long time. It’s like we are spoiled and don’t pay attention to what’s right in front of us.

My point is this: Instead of spending  all my money buying as many hyped beers as I can so I can then trade them, I’ll buy fewer and stock up on the amazing beers that manage to stick around a little longer. In doing so, perhaps, I’ll be rewarding breweries like Le Castor for their customer-focused business plan.

That’s just something I’ve been pondering for a little while now. But enough of that, let’s dive into these fantastic bretted, farmhouse-inspired, feats of deliciousness. 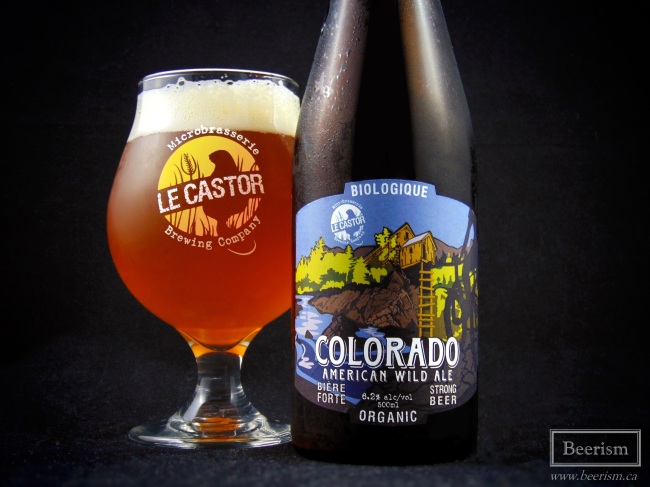 Colorado is an American wild ale, which essentially means a hopped-up brett beer. It pours out a nice glowing copper orange colour, with the right sized head. The nose wafts huge fruity layers, with grapefruit, strawberries, tangerines, and lemon. The brett adds leathery components and some earthiness. Candy and light caramel also make an appearance, lending more depth to this rather aromatic nose.

Flavour-wise, it’s actually more subtle. Like the nose, there are all kinds of fruity elements that dance alongside each other. The hops and the brett release so much juicy complexity. Clementines, grapefruit, and general citrus seem to run the show, with just hints of stone fruit lingering in the backdrop.

The fruitiness, however, is quickly cut down by an assertive but balanced bitterness, followed by a nice dry and bretty phenolic finish. There is a great floral linger to the whole thing. Overall, this hopped up wild Ale is a beautiful addition to the Castor Brett series, and I hope to see it again soon. 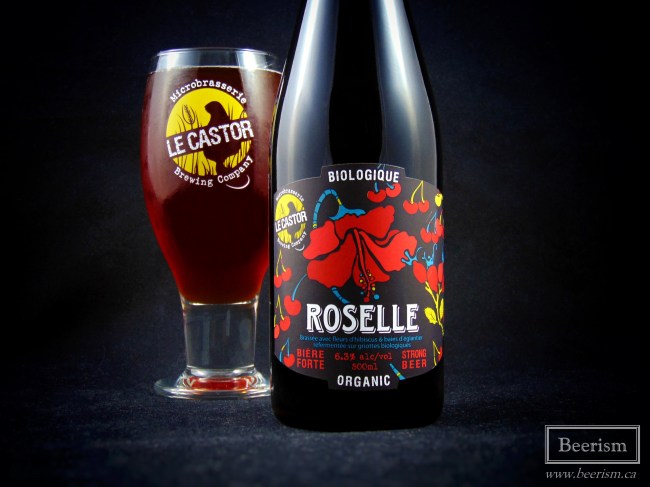 Roselle is a wild saison, brewed with hibiscus flowers, rose hips and re-fermented on sour cherries. It pours out reddish pink  with lots of orange highlights. The effervescence is spritzy and almost soda-like, with no resting head. The nose wafts lots of great fruity components, with cherries at the front. Bretty esters add to the berry fruitiness, lending blackberries that further complement the hibiscus juiciness. Some earthy phenols also play a role lending some dusty aromatics.

Although very fruity, this is crazy dry – like exceptionally dry. This makes the beer lose a bit of the juiciness you can get in similar styles. However, this isn’t a fault, it’s just something a bit more drinkable and light on the palate. And that being said, it does still carry some of those jammy components we love.

The rose hips are secondary to the cherry and hibiscus, which dominate the flavour profile. Dry and lingering brett phenols creep in, leaving a slightly astringent, almost mineral-like dryness in the finish. There is a nice tanginess as well, with supple cherry flesh and juicy hibiscus. Overall this is a delicious and balanced fruit-infused saison that runs clean, dry, and slightly phenolic. What it lacks in juicy and jammy appeal, it makes up for in drinkability and dryness. 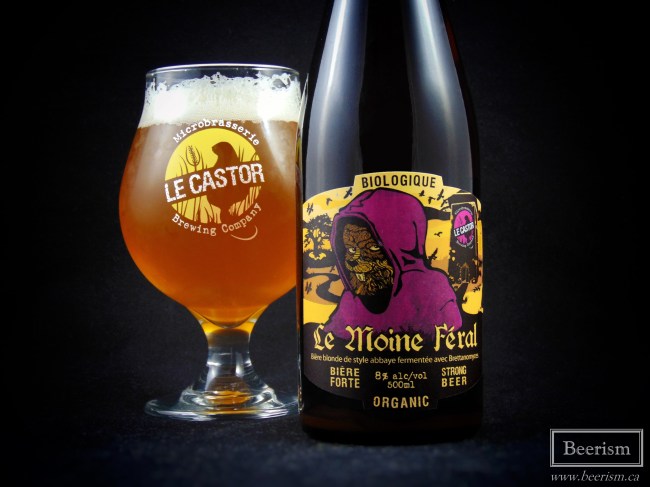 Le Moine Féral is a blond, abbey-style ale, re-fermented with brett. The nose wafts big bretty phenolics that throw up dust, earthy minerals, and damp basement. There is a bit of an “animal” thing as well. It’s quite dank, but also fruity, with some rich stone fruit aromas, like pears and peaches.

The flavours are quite robust, carrying layers of interesting complexity. It feels rich, while also being rather drinkable. Like the nose, it’s fruity, carrying pears, plums and apricots primarily. However, there is a pronounced bitterness, that when coupled with the dusty phenols, make for a rather dry finish.

As it opens and warms, I get some slight notes of trappist- yeast spiciness. I also get a touch of bubblegum essence that I don’t love, but it’s extremely minimal and more of an afterthought. It also becomes softer, with a nice fruity linger that echoes dried fruits in the finish. This beer is solid, but I much preferred Santuaire brett, which was a Belgian-inspired tripel, aged in red wine barrels with brett. 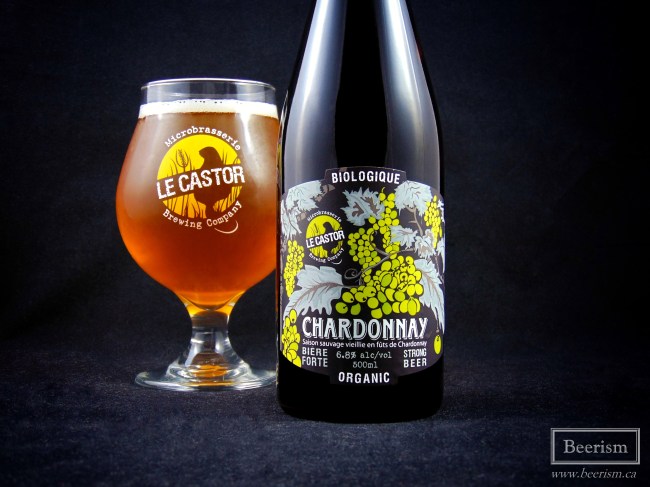 Chardonnay is a wild saison, aged in chardonnay barrels. It pours out a clear copper orange colour and carries a nice little head that rests on top. The nose is a beautiful mix of vinous complexity, coupled with lots of bretty funk. Rich wine soaked oak dominates the aromatics. Subtle fruits emerge as well, lending pears, apricots and fresh grapes to the mix. This smells pretty divine.

Like the nose, this beer is richly vinous, and certainly at the front of this flavour experience. That being said, it is extremely balanced, allowing for multiple layers of complexity. The yeast-forward saison esters add fruity depth,  while the drying bretty phenols add just a touch of earthy dust, which complements those tannic wine remnants quite brilliantly.

There is a lovely and rich fruitiness here, showcasing peaches and apricots, alongside pears, green grapes and underripe strawberries. As it warms, a nice wine-inspired tanginess becomes more apparent. The finish holds a long vinous linger that echoes lots of tangy fruit, coupled with bitter tannins and dry, brett phenols. This is fantastic. 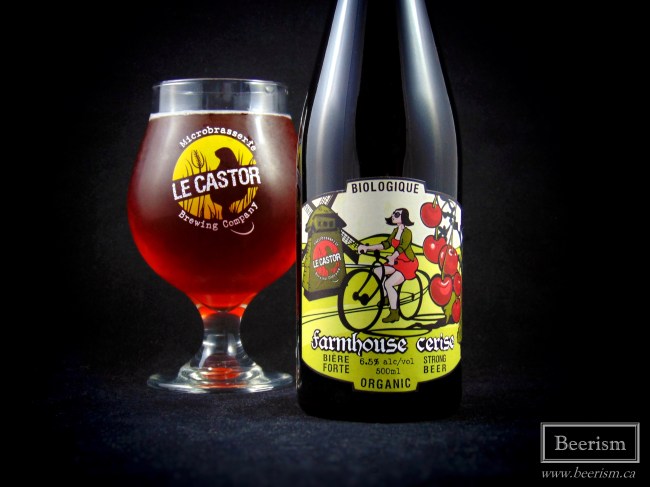 Farmhouse Cerise is a wild saison fermented on sour cerise. The nose is subtle, with the fruit leading the way, providing a nice cherry pie filling aroma, mixed with a bit of bretty phenolic earthiness. It smells a tad acidic, but nothing close to a kettle sour or lambic; more tangy.

Well, this is certainly cherry forward, as it pretty much dominates the flavour profile. However, I love that juicy cherry pie thing you get in these styles. The jammy cherries are cut nicely by some fruit tannins and the brett phenols. It’s not as dry as Rosette, but it’s still well attenuated, with just a bit of lingering fruity sweetness on my palate. The finish carries a slight astringency, which helps cut any sweetness; however it does lend a little cough syrup component that could turn off certain people.

I think what this beer may lack in multilayered complexity, it makes up for in depth of fruit. It comes off a tad one dimensional, and even a tiny bit cloying, but the juicy and jammy fruitiness is delicious and robust, in a somewhat potent way. It’s personified cherry pie, but you know, in a bretted cherry-infused farmhouse saison kinda way. 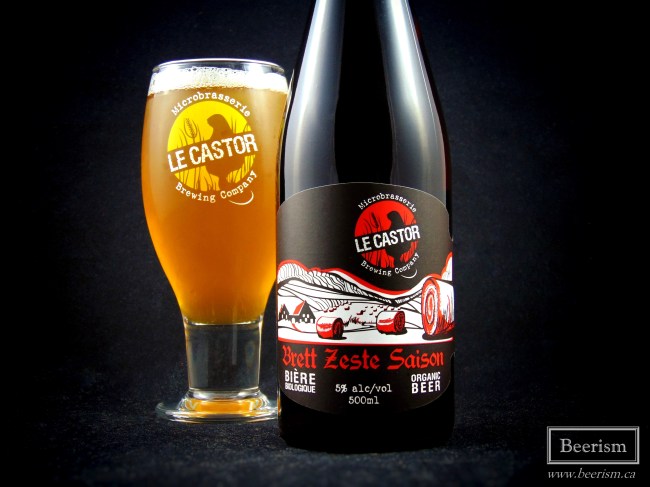 Brett Zeste Saison is a wild farmhouse saison, brewed with the zest and juice of grapefruits. It pours out a foggy yellow colour with some orange highlights. The nose carries a wonderful bretty funk, tossing dusty funk at my senses alongside lots of grapefruit juiciness. This had an amazingly bright and inviting nose.

Upon first sip, this saison is refreshing, light, and beautifully dry. The grapefruit is certainly perceived, but not in your face or overpowering. Instead, the fruit lends new complexity to the fruity saison and bretty yeast eaters. Furthermore, it helps dry the finish with bitter tannins and pithy grapefruit rinds.

All the flavours play off each other brilliantly, with each component complementing the other. Having had all of these beers in a short time, this might actually be my favourite of the bunch. It’s straightforward drinkability, alongside the complex funky brett profile and citrus backing, make it a pure pleasure to drink.

Well that concludes this rather long post, but I hope it was worth the read. Microbrasserie Le Castor has been making great beer for several years now, but this last year and a half has been spectacular. I think we are lucky and maybe even spoiled to have so many diverse and high quality farmhouse ales readily available from this one brewery (not to mention all the other local breweries). Several of these beers are still sitting on shelves around Quebec. I highly suggest given them a try, if you haven’t already.

← Discovering Half Hours on Earth – Ontario Farmhouse Ales at their Best Brasserie Auval Continues to Wow the Canadian Beer Scene! →