Although I have written countless articles about Quebec craft beer, there are still so many breweries that I haven’t been able to talk about. One of the reasons is that many brew pubs don’t bottle their beers. I have a young family, I’m pretty much a home-body, and so I drink beers in my basement or yard, not at a bar. Don’t worry, I’m not complaining; it’s just the way it is. That’s not to say I can’t write about brew pubs, but my articles tend to have extensive tasting notes, which I honestly don’t want to have to worry about when I do get the chance to relax on a terrasse.

I’ve always enjoyed heading to Benelux, a brew pub that has two great Montreal locations, one of which is in Verdun, opening shortly after I moved out of the neighborhood (*shakes fist*). They carry an extensive and ever-changing list of beers that cover an impressively large spectrum of styles — from Belgi Trappistes, to sour Berliner weisses and bretted ales, all the way to hoppy American fare. They pretty much kill it every time. The bars themselves are rather clean in design, carrying an industrial decor, while still remaining inviting. Also, the Verdun location has a gigantic walled terrace, which you should definitely check out. It will be booming all summer.

Once in a while though, Benelux does actually bottle beer! It’s rare, with only one or two released each year. That being said, every time they do release something, it’s pretty damn stellar. Almost every year, they put out a beer called Grand Armada, which is a bourbon barrel-aged American brown ale that is utterly fantastic. However, that’s not the beer that I’m going to talk about today. No, today I’m going to talk about Chronique de Mars, a bottle that was produced at Brasserie du Canal (Benelux Production Facility).

Chronique de Mars is a barrel-aged blend of several different saisons and a pale ale, while the whole thing is also dry hopped with galaxy hops. I’m sorry, but that sounds fucking amazing. It’s like they reached into our beer-geek minds and pulled out one of our wet dreams. With that said, I’m going to drink this, like right now! 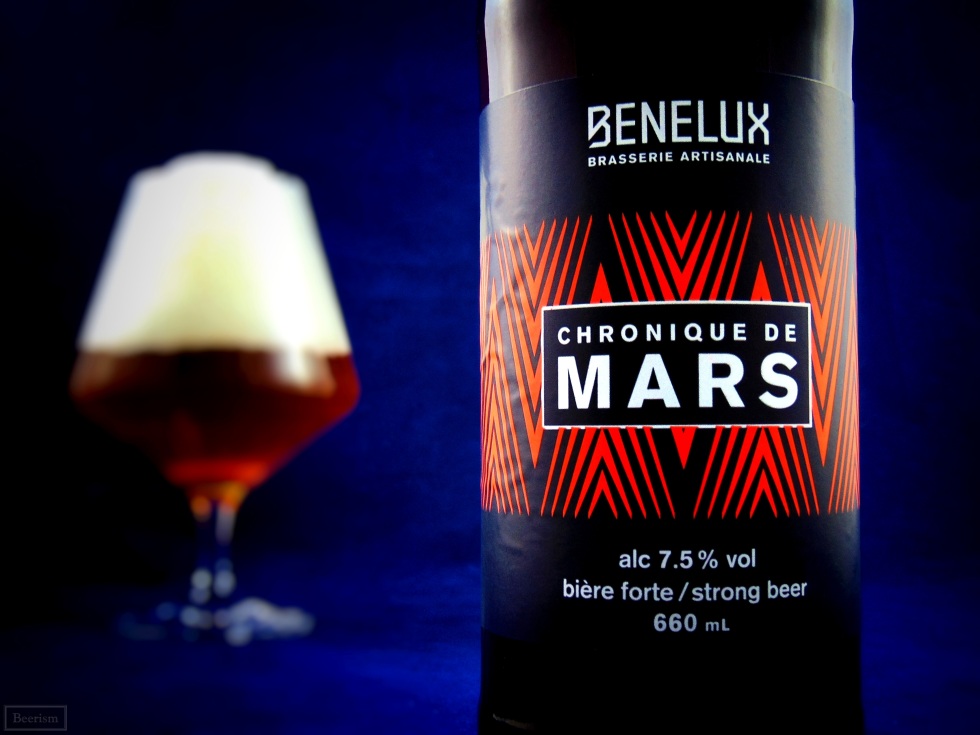 It pours out with a massive amount of carbonation, so much so that my big brandy snifter can’t handle the foamy explosion. It basically looks like soft-serve ice cream. With a bit of time, it calms down and I’m able to get my nose in there.

The aromas begin with loads of bretty phenolic funk, throwing cobwebs and dusty books at me like I was moving into an old man’s basement. The fruity esters come next, mixing with remnants of galaxy hops — mango, orange and a bit of grapefruit in particular. This creates a mishmash of tropical complexities that marry beautifully with the over-the-top bretts that just own the shit out of this beer. This certainly has a quite delectable nose.

It begins slightly sour, with a tangy presence from the saison yeast, and a drying bretty phenolic finish. The dry hop adds layer upon layer of juicy goodness and coupled with the sourness comes some vinous elements that lend tannic bitterness and some wine-soaked oak to the mix. Just like the nose, it’s incredibly fruity; orange, lemon and grapefruit are at the front, with echoes of more tropical fruits, like mango, pineapple and passion fruit. As it warms, the tangy elements grow and makes the fruit pop that much more, while still remaining bone dry.

The finish is complex but surprisingly clean. The notes of brett dust and fruity esters linger on your palate, but the somewhat restrained bitterness leaves you clean and ready for the next sip. One of the most interesting things about this beer are the subtleties. The barrel and sourness play a role, but don’t jump in your face. The dry hop adds a fruity and fresh floral element, but again just lends to the beer as a whole, not being the star. The brett, however, produces a massive dusty bomb of basement cobweb funk, certainly making it the focal point of the overall flavour profile. And yet, even as phenolically potent as the bretts are, the whole beer is balanced nicely, making for a complex, interesting and very good beer.

As usual, whatever Benelux puts into a bottle is pretty much gold. I would love to see more beers come out for sale, but I know there are certainly challenges with that. If you didn’t have a chance to get hold of this sexy barrel-aged specimen, I’m sorry to hear that, as they are likely all gone at this point. That being said, you have two different locations in Montreal where you can sample the wonderfulness that the Benelux team brews daily.