If you’re from Quebec, then you are familiar with Boréale. When I say “you,” I’m not referring to beer geeks; I’m talking about anyone who has ever set foot in a bar, restaurant or grocery store. Since I started drinking, long before the current craft-beer revolution, Boréale has always held a pretty solid piece of the Quebec beer market. Sadly when I was a kid, I didn’t appreciate them in the least. I wanted my beer to taste like watered down corn juice, or stale marijuana skunk. And Boréale, well, it tasted like beer. Real beer was wasted on me, as I got wasted on the horrible slop we dared call beer at the time. Boréale, I’m sorry. You existed and I didn’t care. But that has changed.

Founded in 1987 in the lower Laurentians, Les Brasseurs du Nord has always tried to be forward thinking from an environmental perspective, stressing the use of “all natural” ingredients. At this point they offer a generous selection of beers, mostly sticking to the classics, like Rousse, Blond and Blanche. But they also recently added an IPA, an ISA as well as a few others.

Eventually I did start to appreciate good beer, and have drank many a bottle of Boréale over the years. To be honest, though, I don’t seek out Boréale very often. It’s not that I don’t like it, or that it’s bad; I’ve always enjoyed and respected what they do. As much as they make fine products, I came to see them as reasonably priced alternatives to shitty macro beers, as opposed to beers I was actually excited to buy. However, give me a choice between Boréale and 99 per cent of what is usually offered in bars and restaurants, I’ll go Boréale. Bottom line: you’d be hard-pressed to find a better priced six-pack in Quebec.

That being said, in 2014 Boréale released three new and pretty innovative IPA’s. I had a chance to try them at Mondial, and I thought they were quite tasty. When these new beers came out in bottles, their price tag matched those of other, smaller craft breweries. Boréale was stepping it up. Quality and innovation clearly costs more money. It seemed they were shifting towards the “premium” spectrum. 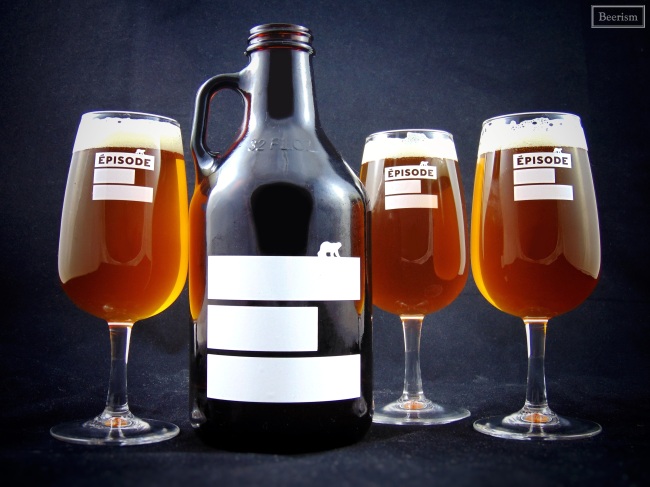 Then, a few weeks back, I caught wind of a new and pretty fun project they were working on called “Épisode.” I managed to procure a growler of the first beer in this new lineup, which I review below. But in order to get some background on this endeavor, I caught up with Boréale’s brewmaster Gabriel Dulong.

Gabriel, can you tell me about Boréale’s “Épisode” project? How did it get started?

The Épisodes project was actually the answer to a recurring challenge we had at the brewery. Due to production challenges, we were unable to brew one-off beers that I’ve had in mind for quite some time. We then decided to purchase a small 8hL pilot brewery that would enable us to have some fun without any restrictions… a late Christmas present!

We plan on creating eight to 10 different brews for 2016, each very different from the next. Fifteen bars across the province will be offering these products. Once an Épisode is done, we move on to the next.  So far the response has been great, which is quite exciting.

The main focus with this program is simply to have fun and experiment. It’s basically a playground which I have at my disposal… gotta love my job! 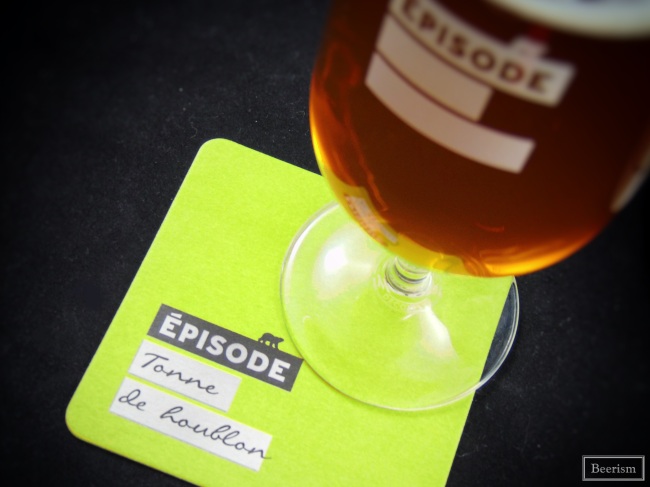 The first beer in the series is called Tonne de Houblon (Ton of Hops). Can you tell me about it? Why was an aggressively hopped American IPA your first choice?

Amongst all the new products that hit the shelves each week, IPA’s get the most hype, making it that much harder to brew an IPA that stands out. I saw this as a proving ground and a great opportunity to make a statement by having an IPA as our first Épisode.

Hops being one of the more limiting and expensive ingredients in beer, Tonne de Houblon gave way to brewing a product without any limitations on capacity/efficiency/cost. It basically was my first “do what you want / have fun, kid” project since I came back to the brewery. It was, therefore, a great opportunity to experiment with new hop varieties (Apollo, Calypso, Fantasia and experimental hops) and techniques. The end result was four times the amount of hops we normally use for our IPA… thus the name Tonne de Houblon.

What kinds of beers can we expect to see going forward in the series? What’s next?

Each Épisode will be limited and very different from the next. We will be covering a wide array of styles and ingredients which we have never used before at Boréale. We plan on experimenting with cultures, barrels and uncommon brewing techniques. That being said, it’s easy to throw in a bunch of odd ingredients in order to make noise. But our attention is on putting forth a refined and accessible product.

We have not yet announced our second Épisode, but it will consist of a refreshing ale brewed with cucumber and fresh basil. Tests are currently underway.

The craft beer scene is growing everyday, with its fans wanting more and more experimental and forward-thinking beers. Do you have any plans to start bottling these “Épisodes” beers? If so, when can we expect to try them? If not, why?

We’ve been contemplating the idea of bottle releases and/or growlers for these beers but it won’t happen for 2016. We want to focus on the program for its first year. Perhaps next year if everything goes well!

Do you think this project will change how people see Boréale as a brewery?

I sure hope it does. I think people appreciate our regular Boréale products but with the growing offer from local breweries producing absolutely awesome beers, we need to bring back the ‘wow factor’ Boréale had in its early years. Laura Urtnowski (founder) has been a mentor and source of inspiration since I first began brewing. It’s with this motivation that I hope to give Boréale the appreciation it deserves, one step at a time. 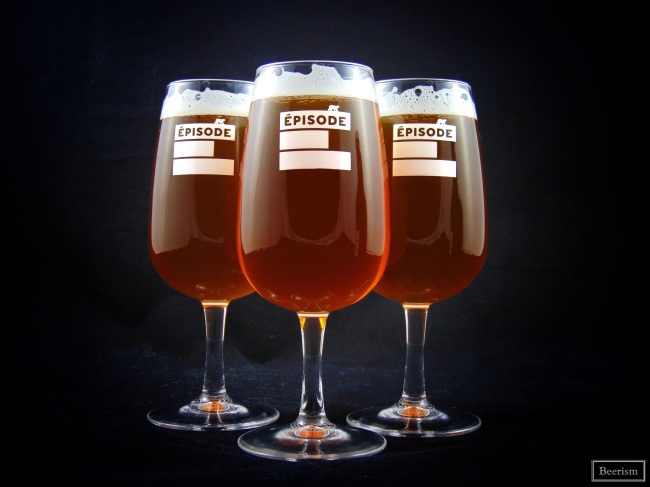 Well, that certainly gets me excited about trying this sexy sounding beer. So here goes it. Tonne de Houblon pours out a dark copper orange colour with amber accents. The nose begins with fresh, grassy hops, followed by lots of pine and citrus fruits. It’s dank and earthy, with a solid malt base that is perceived, but doesn’t overstep, making it quite inviting. There are all kinds of floral notes as well, adding what seems like a bouquet of spring garden aromatics.

Beginning on the flavour front, there is a bitter grapefruit punch that hits your palate, followed by a lot of earthy and grassy hops. Although on the maltier side, it’s well balanced and what sugars are left are cut down by a resinous and lingering bitterness that echoes pithy citrus fruit peel — as if you chewed on some grapefruit rinds. Similar to the nose, it’s extremely floral, with a whole slew of flowery vegetation. It has a full body, but also feels pretty crushable nonetheless, going down smooth with creamy carbonation.

It’s a tad more earthy then I’d like, giving it a certain musty component. While it is quite dry, it’s also a bit malty with a slight vanilla-sweet thing happening. However, overall, this is a well-executed, balanced and straightforward American IPA with a killer resinous bitter finish that I enjoyed. Actually, I enjoyed the whole liter to myself. Tonne de Houblon may not be to my tastes quite to the same degree as some other local powerhouse IPAs, such as Moralité, Yakima or Super A. That being said, it was still really damn good and was certainly the best Boréale beer that I’ve ever had. This is the first in what I’m guessing will be a highly successful and utterly delicious project that Gabriel and the whole Boréale team are putting together.

It’s interesting to think about how success and growth can sometimes hinder the creative process. This isn’t the first time I’ve heard a larger brewery explain that, because of production demands, there is less room for experimentation. That being said, brewing giants like Anheuser-Busch recognize that craft is on the rise, and are going around purchasing smaller breweries to add to their arsenal. I have mixed feelings about such corporate acquisitions, which are arguably dangerous to market diversity. I don’t, however, have any mixed feelings about Boréale — a pillar in the Quebec craft beer world — starting to get more creative and joining the smaller, more refined and experimental beer scene.

I recommend keeping an eye on their Facebook page, that way you can see when their next beer drops, and make your way over to one of the many bars around town that will be carrying it. For a full list of bars that will have the Épisode beers, click here.

← Immoralité is here! Dieu du Ciel!’s Latest and Most Anticipated Momentum of 2016 Tooth & Nail Brewing Company – Rediscovering the Basics with One of the Best Breweries in Ottawa →