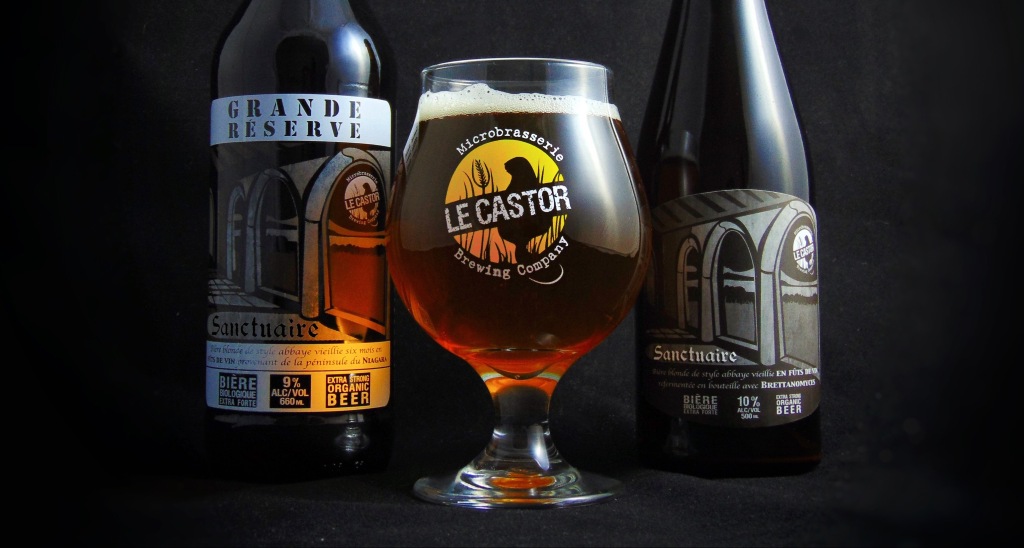 Aging beer in wine barrels is nothing new; Belgian lambic producers have been doing it for ages. However, with the rising cost of bourbon barrels and the surge in tart and funky beers, there are a lot more examples hitting the shelves these days. Moreover, the beer scene is exploding, encouraging more experimentation and thinking outside the box. 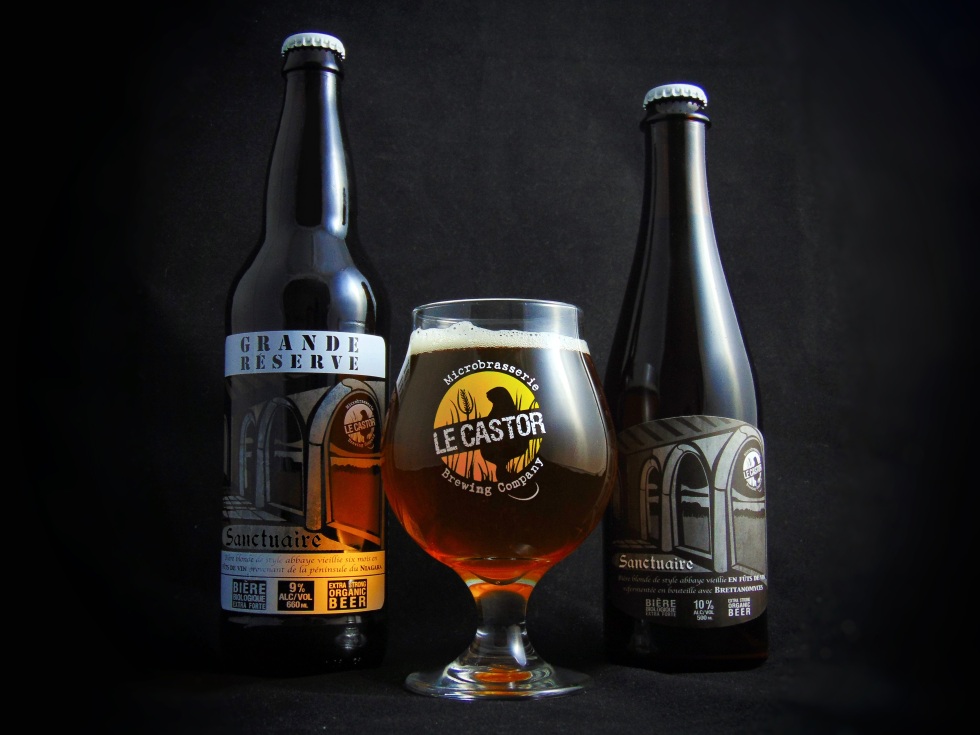 The popularization of brewing with wine barrels excites me to no end. As I said above, it is integral in lambic production, and there are few beer styles that interest me more than lambic. That being said, my focus for this article will be on recent innovations in wine-barrel brewing. Brewers are harnessing the flavour profiles emitted from these oaked vessels in ways that haven’t really been done before (or at least not traditionally). This last year alone, Quebec has been pumping out all kinds of sexy wine-inspired wonderfulness. Almost every brewery that dabbles in barrel aging has created a beer at some point recently that has previously occupied a wine barrel. And personally, I love it.

Whether they are saisons, lambics, dark Belgian ales, IPA’s, or even stouts, beers aged in wine barrels carry a certain dry tannic property alongside additional fruity complexities that simply arouse me in ways I’d rather not talk about publicly (presuming it’s done well of course). So keep ’em coming! I’ll try them all. 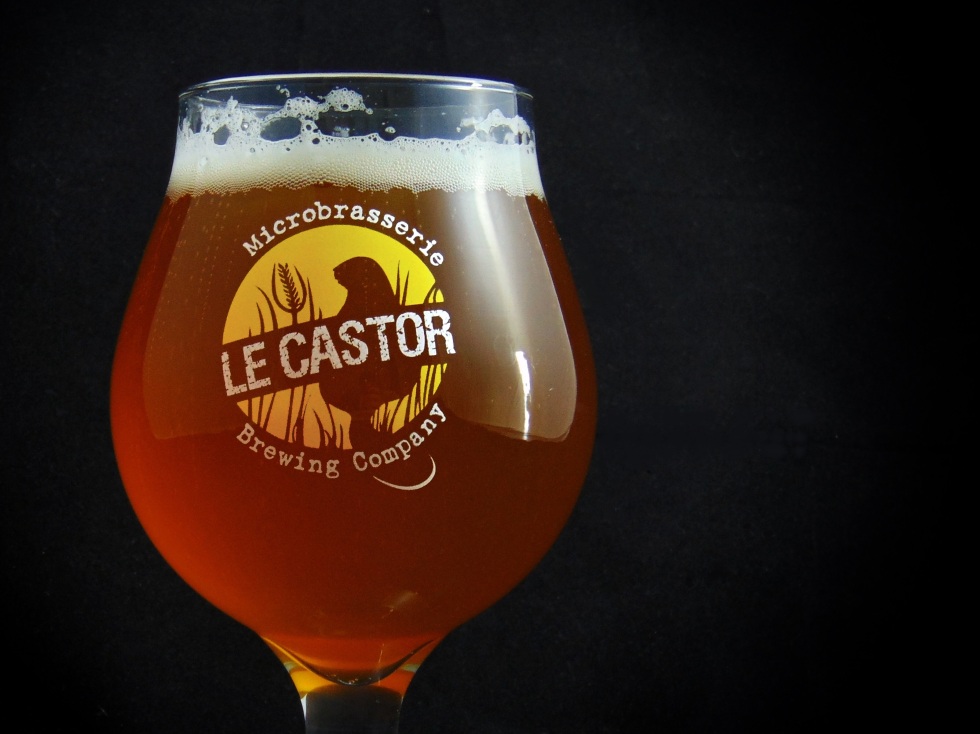 Let’s get a bit more granular and talk about a couple of specific beers. I’m very excited to review the two sexy specimens from Microbrasserie Le Castor pictured above: Sanctuaire and Sanctuaire Brett. I’m enthusiastic because they are likely delicious, but I’m also extra excited because I will learn a little something by comparing them. Both of these beers have the same base (Belgian Trappist-styled Tripel), they were aged in the same wine barrels, and both were fermented with the same primary yeast strain. However, the Santuaire Brett edition went through a secondary fermentation process with a wild yeast strain called brettanomyces. This more volatile and aggressive wild yeast will attenuate the beer further, drying it that much more, while also imparting a whole spectrum of new and exciting flavours, like dank musty basement, barnyard and fruity complexities that the non-bretted version will not. It’s amazing how one component can alter the beer in such a grandiose fashion. Now, not having tasted these beers yet, I’m speculating. So let’s change that. 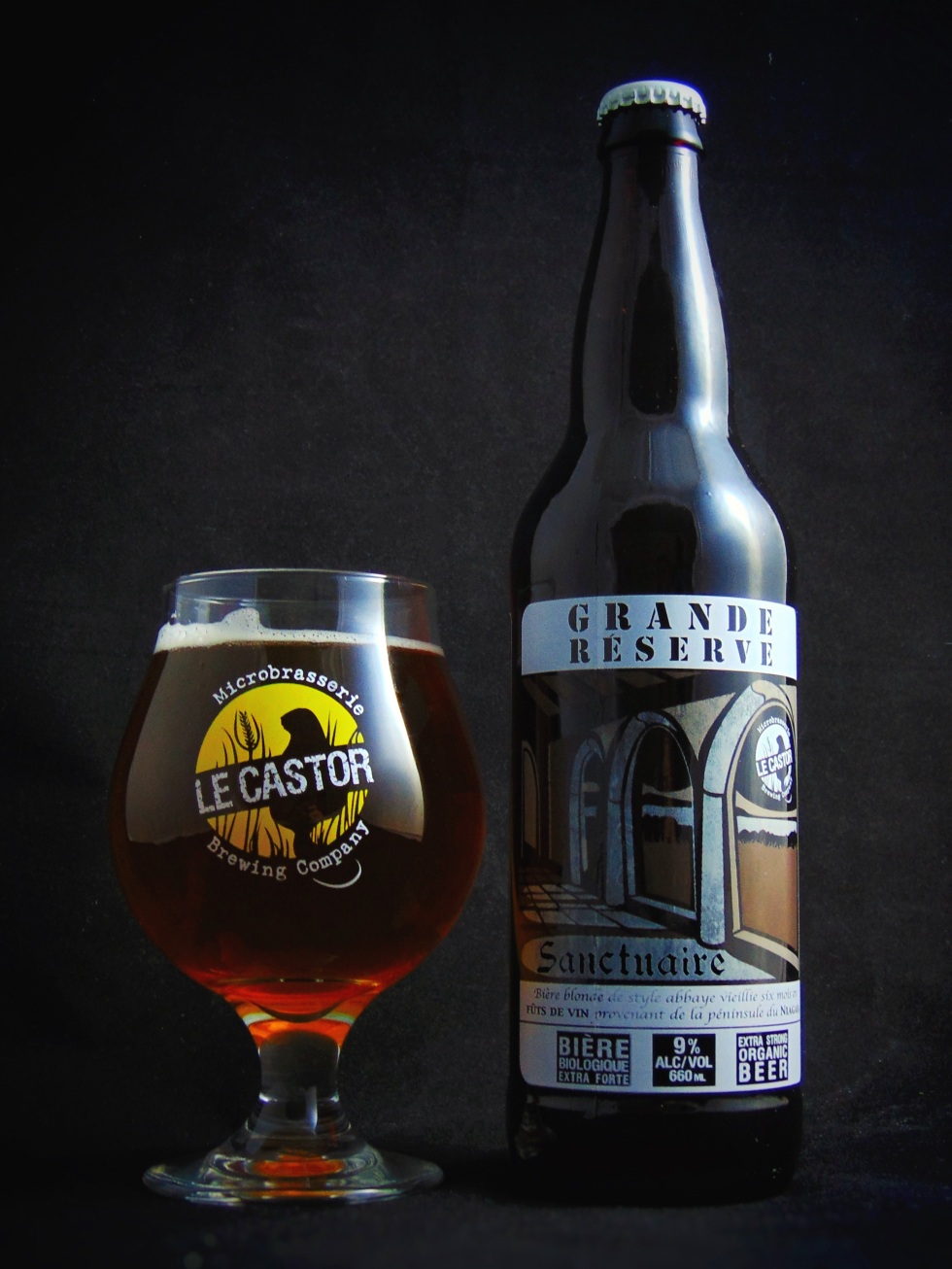 Sanctuaire hit shelves back in 2014 and has been aging gracefully ever since (or at least I hope). As I was mentioning above, it is a Belgian Tripel, but aged in a mix of red wine barrels, including Pinot Noir, Merlot and Cabernet Sauvignon.

It pours out a crystal clear copper-orange colour with a modest head that sticks around for pretty much the entire drinking session. Given that this has a year on it, I’m getting lots of honey notes on the nose, mixed with hay, wheat, Belgian yeast phenolics and some subtle wine remnants. There are woody oak aromas as well, alongside sweet fruity essences of apples and pears.

The flavours match the nose quite well, lending the same profile to the tasting experience. There are lots of honey essences, alongside a big, almost cider-like Apple flavour. The Belgian yeast is still present, but the esters have evolved, making it less bright, and carrying instead flavours of dried fruits, like golden raisins and dehydrated peaches. There are still some spicy phenolic attributes. But the usual Belgian yeast clove and cardamon thing has diminished, and now just subtly integrates into the big fruity honey malt bomb that’s happening here.  There is a sweetness to this beer, but it’s cut immediately by some nice wine tannins in the finish, leaving a long dry linger of vinous oak and honey.

Like everything from Le Castor this is incredibly balanced and subtle in its own intensity. The wine really complements the beer as a whole, which would likely come off a bit cloying without it. The tannins cut through the finish, which allows the beers to shine nicely. Wine barrel for the win! 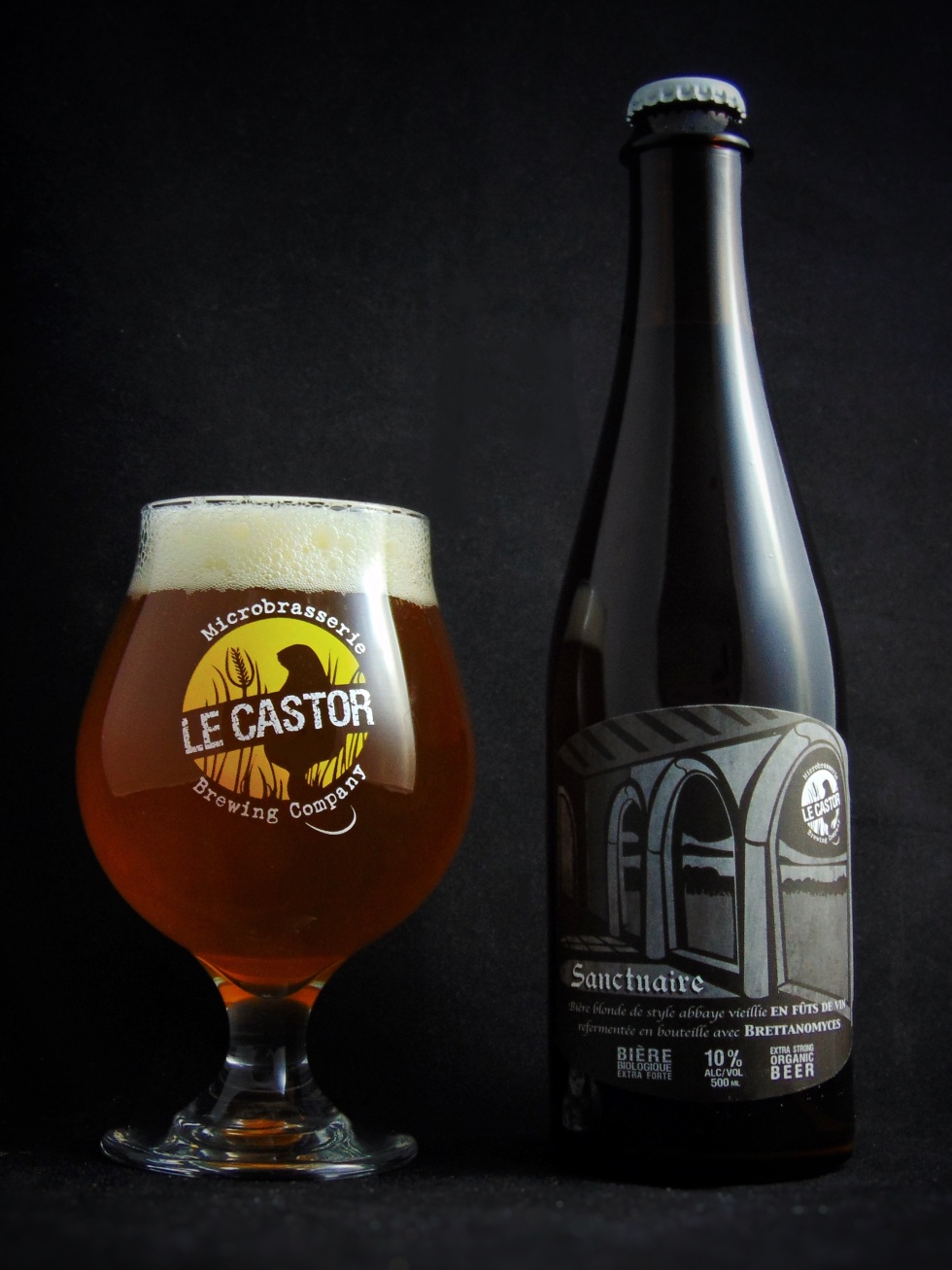 This “Brett” version of Sanctuaire was released about a year after the regular version (a couple of months ago). However, the interesting thing is that both these beers are exactly the same age. Le Castor was not 100% satisfied with how it was drinking at the time, so they decided to sit on the bottles for an entire year until it was ready. These kinds of decisions really showcase how much integrity and love Le Castor has for their products, and beer itself. It’s impressive and a refreshing reminder that the people behind craft beer aren’t generally only about the bottom line.

Sanctuaire Brett pours out a robust orange colour with yellow highlights, and carries a dense frothy white head. The nose begins with beautiful brett components. Dusty phenols meet berry-like esters, and when combined with the tangy red wine layers, this makes for an aromatic masterpiece. There are peaches and apricots as well, with a nice zesty apple cider thing.

The flavours mimic the nose, throwing a bunch of fruitiness at my palate. There are apricots, plums and peaches dancing around a nice tannic wine presence. This helps clean away any sweetness, leaving a dry finish. The brett plays a major role, adding loads of dry dusty funk and some damp basement. As well, it lends a earthy phenolic finish, further drying the beer and making it more palatable. There is a vanilla oak component, and when coupled with the fruit and subtle sweetness, adds such an amazing new layer to the whole thing. 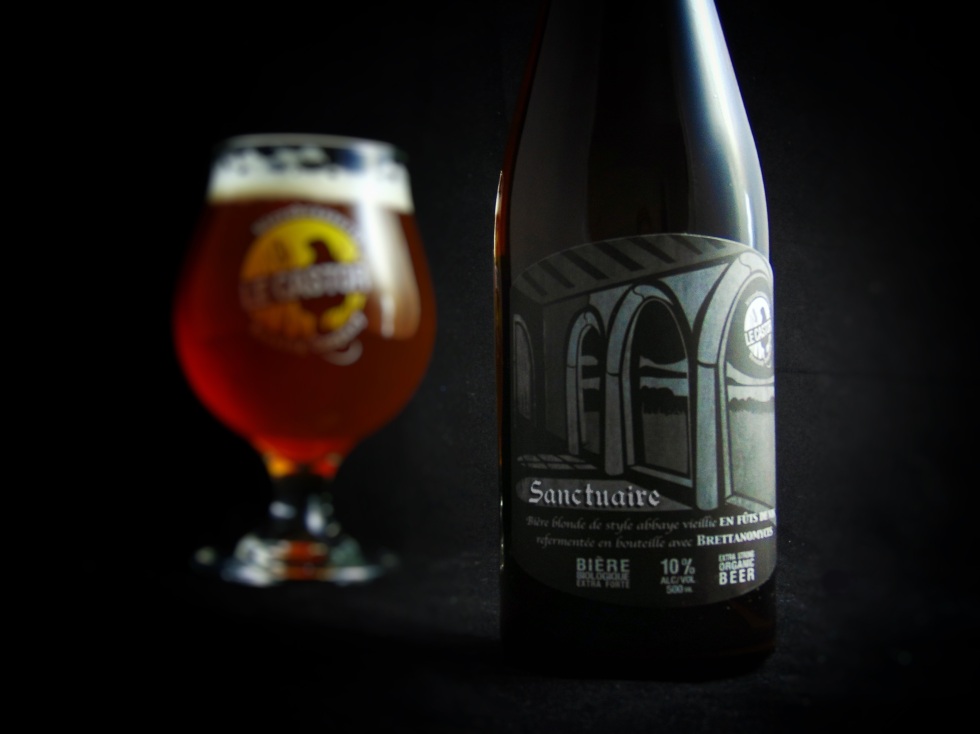 There is an amazing overall rounded balance to this beer; it has a big bold body, with just a slight booze burn and some intense flavours that dance on your palate. Despite its robust and potent character, it drinks incredibly well, with a complexity that takes all these components, adds them together, and creates a product that is so much more than the sum of its parts.

This bretted version is a completely different monster. There are no longer any of those typical spicy Belgian yeast phenols, and any sugars that were perceived now seem to have been eaten away, making this a perfectly attenuated masterpiece. That being said,  the regular un-bretted version is also delicious. It is a great, modern and more refined take on a Trappist-styled Belgian Tripel. The wine remnants and tannins help control the sugars, creating a balanced beer. Of the two, however, Sanctuaire Brett is one of the best beers I’ve had in Quebec this year. It hits all the right notes, never giving you too much or too little. There are still some lingering on shelves around Montreal. I highly recommend grabbing some.

The Chin Wag volume 8 is happening here on Instagram tonight at 8:00PM. I won’t be joining this week, but there will be a special guest taking my place. As always, @5ebaron will be consumed, and this time it’s this killer west coast inspired pale ale called “Juniper” @hopsandbros @baospodcast @nathandoesbeer
@mattmcgachy , frontman for the legendary metal band @cryptopsyofficial took his metal and craft beer podcast @voxandhops to another level by organizing a damn near impossible list of music and brewery collaborations called “Brewtal North America”. Keep your eyes peeled for these incredible beers!
In just a few minutes I’ll be going live here on Instagram for the 7th edition of “The Chin Wag” with @nathandoesbeer @baospodcast and @hopsandbros , where each week we open a new can from the amazing @5ebaron and talk all things beer! Come join us!
@lagabiere recently dropped this sexy pale ale, aptly named “Nice N’Hazy”. The nose is tropical and bright, delivering juicy melon and mango alongside some earthy funk. Palate is light yet juicy. Big peach and apricot meet lots of orange, creating a zesty and pretty round profile, with the perfect ABV to drink quick. Solid stuff!
This is Impérial Espresso Corsé from @beauregard_micro . The nose is all coffee. Huge earthy and dark chocolate forward aromas deliver a nutty and fruity complexity that is echoed by mocha and hints of black cherry. The palate is rich and layered, carrying a beautiful espresso punch that delivers loads of earthy chocolate and nutty flavours. Seriously solid.
Much of what @omnipollo creates seems to come from an alternate reality. This is Zodiak IPA, available in Ontario, and seems more grounded, delivering big tropical layers and some balanced juiciness. Thanks for the hook up @getitinyacee !
Nuit de Munich is from @brasserievrooden is a German inspired Munich Dunkel. The nose is zesty and herbal up front with lots of toasted grains. Caramel and maple accents meet some sticky “tire sur la neige” and brown sugar. Light doughy malts deliver a pumpernickel bread aromatic experience. Palate is light and roasty as well, carrying lots of nutty malts. It’s dry but round, delivering a nice fruity character that is further complimented by the essence of sweet taffy and maple. Easy drinking an complex. Tasty stuff!
@messorembracitorium have kept refining their sweet stouts over the last couple of years and are now making some of the best in the country. All three of these were spectacular!
Well St Patrick’s day has long come and gone, but I sure wish I had this refreshing a kinda crazy smoothie sour from @smallponybarrelworks to have by the pool. This is Smüv Green, a golden sour beer aged in oak barrels packaged with pureed kiwi, mango, lime and spinach. And it’s green AF
This is “Impériale Latte Praliné” from @beauregard_micro . The nose is full of coffee and mocha sweetness - it smells like a chocolate bar with taffy and maple syrup drizzled on top. The nuts are there as well, with some toasted almond aromatics.
This is Hop Crush, a DIPA from the folks at @pubbrewskey - The nose is dank and bright, carrying huge pineapple and zesty citrus. Passion fruit and mango come through as well, blasting the senses with intense hop aromatics.
Silo C from @brasseriesilo is an “IPA with Classic Hops” - think Two Hearted Ale, or something like that.
💥💥UPDATE💥💥 WE ARE POSTPONING TO A LATER DATE.
Did you know that @pub_amere_a_boire was canning their killer lagers? Well they are and I can’t wait to dive into these beauties!
Razzia from @brasseriebascanada is a 10.5% Imperial Sweet Stout with lactose, hazelnut, coconut, and Hazelnut Coffee. The nose is all hazelnut, with layers of milk chocolate and a big vanilla punch. Cake batter and general chocolatey rich aromatics come through, as well.
Frau Riesling from @materabrasseurs is a mix fermented Riesling Foudre-aged wild ale. The nose is exceptionally fruity and vinous, with layers of fresh pear and green grapes, mixed in with a lovely dust-forward earthy funk. Smells tangy and lightly acetic, with notes of white balsamic.
Again, the @brasseriebascanada is online release is today at 18:00 if you’re interested! This is Citadelle, an 8% Double IPA with Nectaron, Galaxy, Mosaic and Simcoe. The nose is bright and dank. Lots of grassy and piney notes meet serious tropical layers. Tree sap and mango flesh with tangerine rinds also come through.
Monument is an 11% Bourbon Barrel-Aged Imperial Stout from @brasseriebascanada – and that’s it! No lactose, no coconut, no coffee. It’s kind of an exciting shift for me as BBC’s pastry stouts are (in my opinion) the best in the country, so seeing how they pull this one off will be fun! You can order it starting tomorrow for their Spring Bottle release. But get your trigger finger ready, they are gonna sell out in minutes.
Tick... Tock....
This coming Friday May 21st, @brasseriebascanada will be “hosting” a spring bottle and can release! And by hosting, I of course mean that they will be having an online release where you can purchase a crazy lineup of eight new beers.