Posted by beerism on February 4, 2016 in Beer Reviews | Leave a comment

The Eastern Townships are essentially on their way to becoming the beer paradise of Quebec. Veterans such as Brasserie Dunham and Boquebiere have been pumping out beer for some time now, with Dunham climbing the ranks as one of the best breweries in Canada, and well, the world (recently making Ratebeer’s top 100 breweries in the world for 2015). Marché du Village, a small independent  superstore, teamed up with René Huard from Brasseurs illimitée to create some interesting and fantastic barrel aged beers, which they sell on site. Marché Gaouette (IGA) is also a must stop beer store when you are in the area, carrying a huge selection of hard to find offerings. As well, Pat Roy, a former Dunham brewer, has opened up Microbrasserie Auberge Sutton Brouërie, where he will be producing all kinds of wild beers (I’m VERY much looking forward to this endeavor).

Oh, and the list keeps going. In Magog, there is an English-style pub called Microbrasserie la Memphré that serves up beers created by its brewer and head of operations, David Plasse. I’ve known Plasse for several years now via social media, but because I never go anywhere, I’ve yet to try anything from the brewery. That being said, La Memphré has now started bottling small batches of rather interesting concoctions, and I landed a bottle this week. So, I’d like to tell you all about it. “Mi-Figue Mi-Raisin” is a fortified wine barrel aged, Belgian Dark strong ale, brewed with golden raisins and figs. It was Brewed in collaboration with Loup Rouge and should be hitting stores around Montreal today!  I have a bit of a soft spot for wine barrel aged dark beers, so I’m very much looking forward to trying this. In a sea of Bourbon barrel aged stouts and barleywines, I think it’s fantastic that La Memphré  decided to do something slightly different. I caught up with David over e-mail to ask him a few questions about the brewery and beer in general:

It seems that La Memphré is now doing more collaborations, barrel aging, and general experimentation that fall outside your regular line up. Was the decision to go this route simply because it’s the natural progression of where La Memphré wanted to ultimately go, or were you guys inspired by the amazing experimentation and subsequent  success of many of your brewery peers?

Mostly natural progression. All the transformations that happened in the last ~3 years (with the new brewery and a new industrial licence) were not intended to only keep brewing regular, easy-going and – to some extent out of touch – beers. We are working hard to bring the brewery up to the present level of the “beer-game” in terms of variety, style and quality. Collabs (in addition to being fun and instructive), barrel aging, experimentation, etc. are steps you take to redefine your position in the industry (towards your peers and the client), improve your portfolio and challenge yourself as a brewery/brewer.

Necessarily, the amazing work and the success of many of our fellow brewers is also an inspiration/motivation to go down that path.

Until recently, La Memphré didn’t really bottle (as far as I know). What sparked this change, and can we expect a regular line up of bottles down the line?

We first had to set up the new brewery, understand it, be able to work with it, etc. It’s been just over a year (first brews happened November 2014) that we’ve been brewing with our new equipment, getting used to it, getting to know it. Beyond the financial challenge of having to get the bottling equipment, we also had to “try out some stuff” as a new brewery and the CSP scene (if I can call it that way: beer bars, draft beer market) is a bit more permissive and forgiving in general – in comparison to the bottle market.

2016 should be the year where there’ll be more of Memphré in terms of shelf presence but don’t expect any regular line up. That’s not the plan. We’re planning punctual releases of seasonal beers.

At this point has La Memphré created any mix fermented, wild (Brett) beers, or any sours in general? I know there are many challenges surrounding these brewing methods, however is this a direction that you think you’ll ever want to go?

We’ve been playing with brettanomyces a lot. We had a couple of saisons that were conditioned with brett (Ruée vers l’Est for example). We even did a 100% Brett “side-batch-version” of our collab with Francis Richer (Démagog; multigrain session ale). I’m a big fan of bretts in general and really enjoy the aroma/flavor panels it offers in a lot of beers. In terms of sours though, me and Eric (the brewer that’s been at Memphré for 7 years now) are really not big fans of sour beers. It’s just not our thing so we rarely feel like brewing such beers. 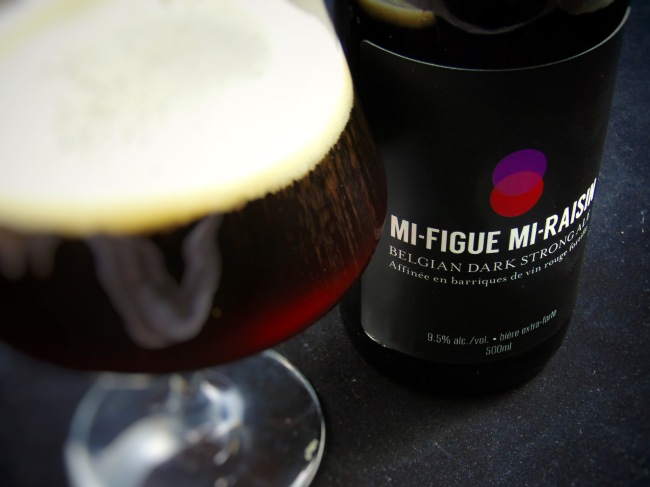 Can you tell me about Mi-Figue Mi-Raisin? What inspired its creation, and how did the collaboration Come about?

The idea came to me and Jan-Philippe while we were brewing our first collaboration (Sua Grösz Kölsch). We joked about brewing a beer that would have the name of the expression “mi-figue mi-raisin”. The more we joked about it, the more we realized that we were onto something. Couple of months later we were brewing the beer. ¯\_(ツ)_/¯

What new concoctions can we expect in 2016?

We plan on releasing a bottle version of Col roulé (moka porter) in March. Ralph Merry – our anniversary beer – should come out in the summer~ish. The 2015 edition seemed quite appreciated so we hope to satisfy everybody with this year’s version. The idea is to present something new each year but always in the line of “dark barrel aged” beer profile. We’ll have a TTO at Lagabière in April (16th) and we’ll brew a collab with them for the event. And I’ll be in Jonquière brewing a collab with Hopera at the end of February and that should be pretty adequate. 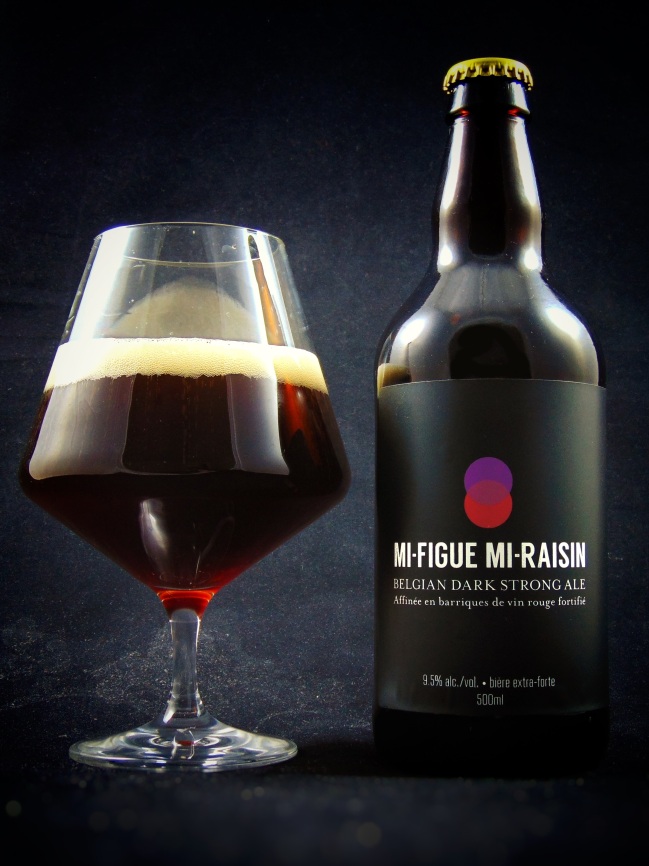 So as I was mentioning above, “Mi-Figue Mi-Raisin” is a fortified wine barrel aged, Belgian dark strong ale that was brewed with golden raisins and dehydrated figs – and it sounds delicious. It pours out a foggy chestnut brown, with lots of amber highlights. It carries a frothy head that just rests there and never goes away. The nose begins with loads of wine aromatics alongside lots of oak characteristics, like vanilla and dank woody funk. Some slight phenolic Belgian yeast aromas come through as well, lending those spicy components to the mix. Some sweetness is apparent as well, but subtle next to the huge wine forward presence. Caramel, toffee, and biscuits mix with figs, dates and raisins, creating a fruitcake-like thing that is very inviting. P.S. I’m actually one of those people who love fruitcake.

Just like the nose let on, this is exceptionally wine forward, with a beautiful robust vinous grape presence that knocks away any unwanted sugars with its drying tannic finish. The barrel has certainly transformed this beer into something unique. There are still many elements from the Belgian dark ale, like the clove-like phenols and caramel chocolate malty sweetness, but they are mostly on the sidelines,  complimenting the extremely barrel forward wine component that has taken over.

The alcohol is extremely well hidden, only leaving a slightly sharp compliment to the tannins in the finish. As it warms and opens, the flavours start to really project themselves, working in tandem with each other to present a good overall balance and structure.  Figs, grapes, cherries and raisins provide a wondrous fruity component, while the malts add just hints of toasted caramel and brown sugar. The spicy yeast phenols work alongside the big vinous flavours, drying everything out with a great tannic bitterness.

If I had to give criticism I guess I could say that it would be nice to have a tad more body. However, that being said, that is also part of its charm. It allows the beer to go down so much easier, avoiding any awful cloying potential. The ABV still impresses me, as this certainly does not drink like it’s 9.5% – it’s so well integrated.

As you can tell from my descriptions, this is certainly a beer that is complex and multi-layered. However, it is also rather simple and incredibly approachable. This makes it a very palatable beer that isn’t boring, but not over the top intense either. I feel like wine lovers and beer lovers alike would really dig this, perhaps bridging the gap between these two beverages. I highly recommend going to pick up one of these sexy specimens, and please, let me know what you think!