When I first started getting into the beer scene, I kept reading about “adjuncts.” At the beginning I had no idea what they were, but very quickly it became clear that whatever they were, they were bad! By perusing beer sites I was quickly informed that adjuncts are basically ingredients added to beer that land outside of the normal “hops, barley, yeast and water” ingredients list. The term became synonymous with badly made American “macro” lagers, given that these multinational corporate beer peddlers added things like corn and rice to their products because it’s cheaper and makes the beer “smoother” to drink. There is even a beer style called “adjunct lager”to describe these watery and off-flavoured halfwit beers. 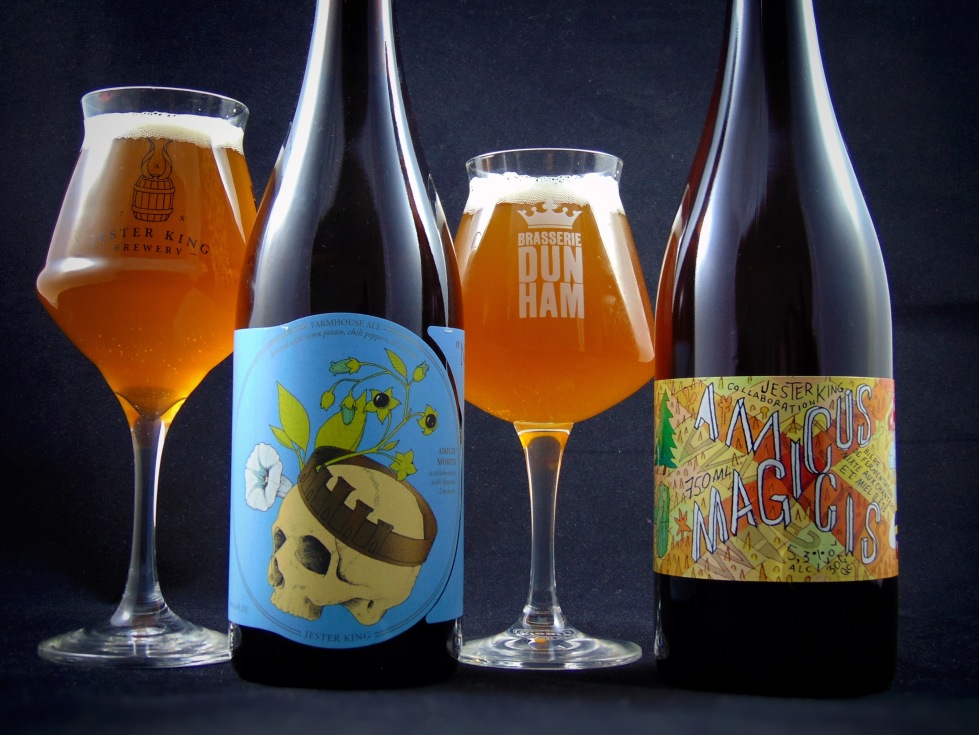 So adjuncts are bad, right? Well, actually, no they are not. In fact, in my opinion, they are extremely important and played a huge role in the success of the “craft beer revolution.” Now I see that I’ve confused you.

Unlike wine, ingredients that fall outside the norm are actually welcomed in the craft beer world, and have even become standard in many cases. Chocolate, coffee, fruits, and spices are just naming a few “adjuncts” that are prevalent in a countless number of brewery offerings. The innovative use of new ingredients changed what beer is, and what it can be. Chefs and restaurantours can use these types of beers to pair with their food in a particularly specific way, unlike anything before.

The general idea behind using these adjuncts  is to do it in a way that is balanced and subtle, and most often to enhance the pre-existing flavours that already exist in the beer (unlike the macro beer producers who use them as fermentables to save money). For instance, a stout already has a torrified, coffee-like flavour from the dark roasted barley inside of it. By adding coffee or espresso, the flavours work in conjunction with each other, creating a harmony of deliciousness.

So yes, as much as most of the macro-breweries’ lagers are filled with corn and are generally pretty nasty, the addition of adjuncts in beer is not by definition, a bad thing. Subtlety however, is everything. These ingredients need to compliment and not overpower the beer itself, because when they do, you end up with a terrible mess. 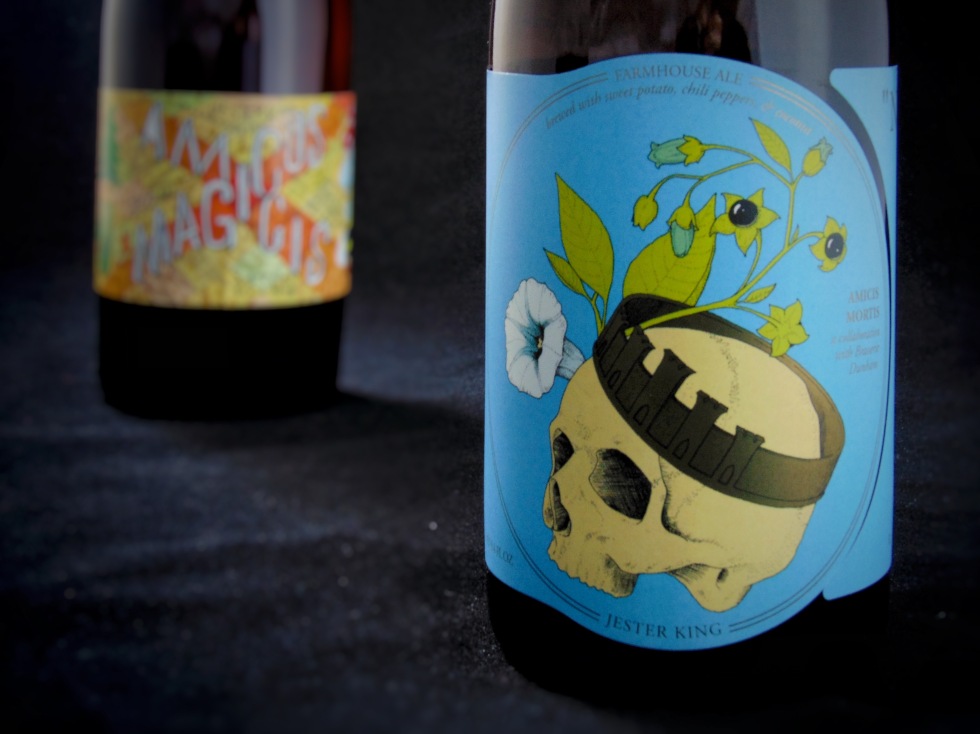 Sometimes though, the usual list of adjuncts gets thrown out the window, allowing for great minds to think up brilliant concoctions that are way off the beat and path. That is certainly the case with the two beers that I want to talk about today: Amicis Mortis and Amicis Magicus, which were both created by a meeting of the minds. Brasserie Dunham, a Quebec-based brewery that I have written about many times, teamed up with Jester King, a fantastic brewery in Texas, to create these two, dare I say, bizarre beers. (Amicus Magicus was also brewed and conceived with the assistance of Alex Ganivet-Boileau, brewmaster for Les Trois Mousquetaires).

Amicis Mortis (Brewed at Jester King) is a farmhouse ale brewed with sweet potatoes, chili peppers, and coconut, while Amicus Magicus (Brewed at Dunham) is an ale created through mixed fermentation, with chanterelles and honey. Yes, that’s right, there are mushrooms in this beer!

According to Jester King’s blog, the friendship between these two breweries, and the resulting collaboration, all started when they tasted some of Dunham’s beers in Los Angeles during a festival. They fell in love with the beers, and then ultimately with the people behind them. Both of these breweries experiment a lot with different ingredients as well as mixed fermentation, but these two beers seem to be pushing the limit a tad, even for them. So, let’s get started! 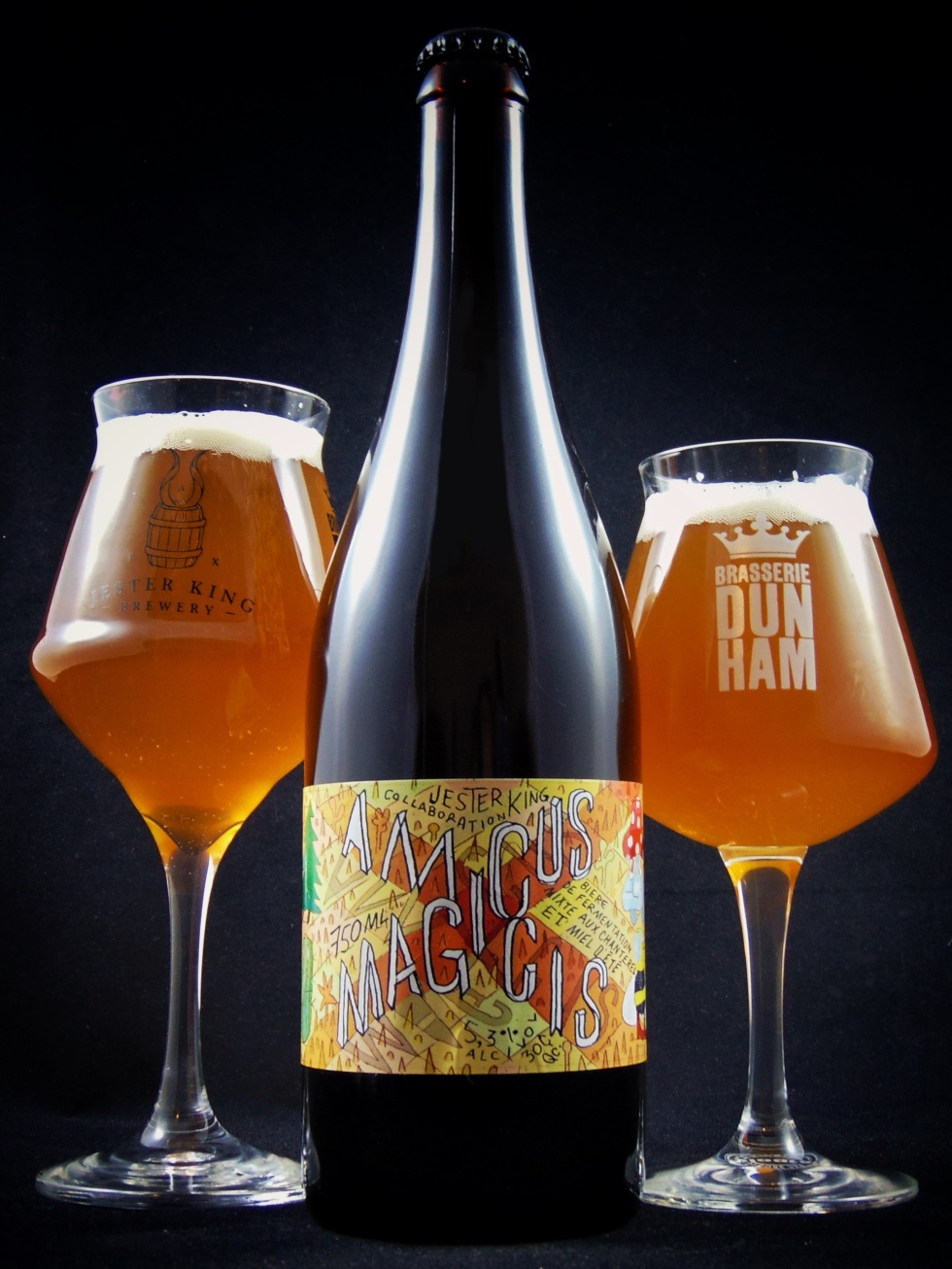 Again, Amicis Magicus is a mix fermented beer brewed with adjuncted honey and chanterelles. It pours out a foggy orange colour, with a perfectly frothy head resting on top. The nose begins with lots of floral honey notes, coupled with spicy Belgian yeast phenols, like cloves and cardamon. There is also some fruitiness as well, with some banana and cherries making an appearance.

Wow, this is exceptionally dry, with an unexpected crushing bitterness that lingers in the finish. There is far less of that spicy phenolic presence that I found on the nose. Instead there is a light apricot flavour that’s hard to place, unlike the fruit itself or from hoppy aromatics. I’m thinking this must be from the chanterelles. As well, although I can’t taste the “mushroom” presence, there is this interesting savory element that is hard to describe. It’s peppery, and earthy (but not in the phenolic sense). As I was mentioning, this is extremely bitter, and the finish has a resinous linger, alongside a hard to describe spiciness that adds a fun depth to the whole thing.

Overall, this is quite a unique beer. The floral aromatics from the honey go well with the phenolic yeast flavours, while the fruity and mushroom earthiness lend a nice finish that coincides with the crushing hop bitterness in the finish.

Amicis Mortis is a farmhouse ale brewed with sweet potato, chili peppers, and toasted coconut. It pours out a glowing yellow orange colour with a fluffy white head that sticks around throughout the whole drinking experience. It smells of musty brett phenols with a strong earthy funk, tart apples, and a very slight vegetal things that’s really hard to explain. It’s not off-putting at all, in fact, I love this nose.

As the aromatics foretold, this is a dusty brett bomb. It’s exceptionally dry, with a slight lingering heat in the finish. It’s extremely drinkable and there is a higher than average bitterness that works well with the chilies. The coconut and sweet potatoes don’t come through much, but there are hints that present themselves after a sip. There is a slight acidic edge, which also dries things out.

The musty phenolic finish rests there alongside a tart apple cider thing, with no sweetness to be found. Considering all the ingredients and complex microflora, this is quite clean, especially in the finish. As it warms though, the sweet potato and coconut finally come to light, adding just a tiny bit of sweet essence to the dry bomb of a finish. Overall, this is far more delicate than I assumed it would be. 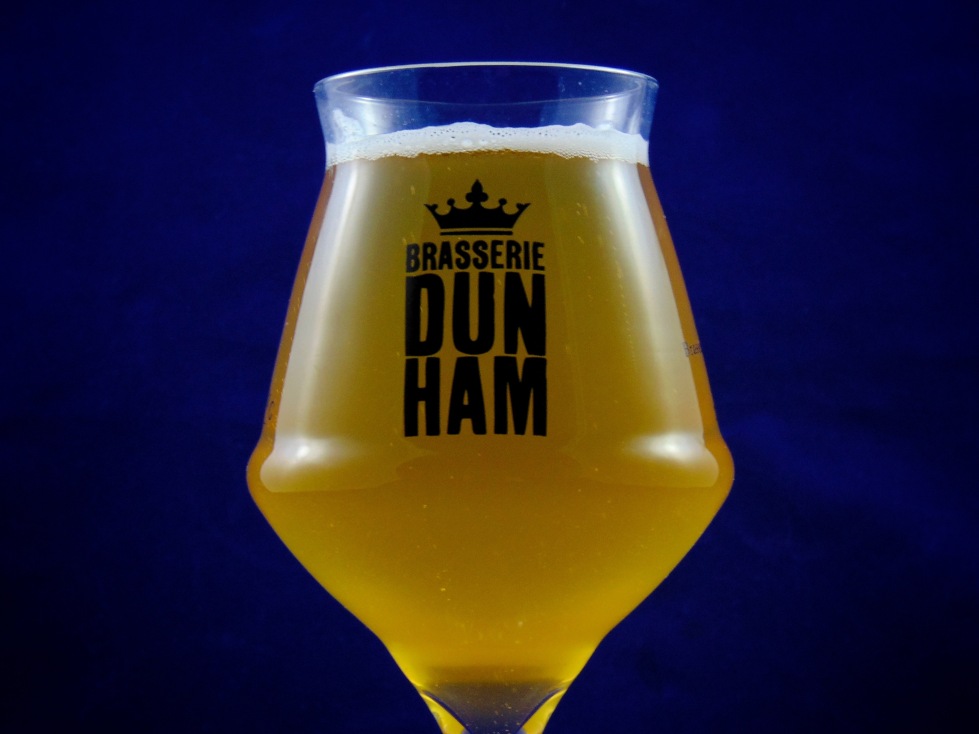 The modern beer scene is constantly in flux, with new trends coming and going every year. Innovation is extremely important and has driven much of the success of this rise. Weird concoctions are certainly something that has been harnessed to be gimmicky marketing ploys based on our weird obsession with “extreme” things, but as much as we can’t accept many of these bizarre beers at face value, we can’t brush away those that have the potential of being great.

Brasserie Dunham and Jester King are exceptional breweries, who I trust to make brilliant concoctions. Amicus Mortis and Amicus Magicus are not on the top of my list from either these two breweries, but they are delicious beers created with ingredients that I would never have thought could work. Bravo to the both of you!