Mikkeller Black VS Montreal Winter – A Battle of Extremes

Winter is here, and in Montreal, it crushes you. Just when you think you have a handle on things, you get thrown a blizzard, or an ice storm, or negative 30 degree Celsius temperatures – maybe even a combination of all three. You severely lack vitamin D because the sun hates your stupid face and has been avoiding you for months. You get depressed, and there are only a handful of things that make you feel better: (1) never needing an excuse to stay at home and become a weird recluse, (2) being able to wear long underwear 24 hours a day, (3) how it’s somehow socially acceptable to remain an insufferable complainer about the weather without people rolling their eyes, not to mention being able to tell all your friends from other counties how they have it so much easier than you. That being said, I’ve personally found particular solace shoving my face into the big, heavy, and warming beers that this unforgiving, douche-bag of a season yields. These beers are often referred to as “winter warmers,” and are basically higher alcoholic beers that you can sip slowly, as they warm you from the inside out – much like a cognac, port or big red wine. However, winter warmers are one thing, the Mikkeller Blacks are something else.

There is so much to say about Mikkeller, but I’m not going to get into all of it here as it deserves an entire piece unto itself. In short, Mikkeller is a gyspy brewery. This means that its master brewer, Mikkel Borg Bjergsø, doesn’t own a physical brewery, but instead commissions other breweries to brew his beer under his strict guidelines. This allows him to make A LOT of different beers with less overhead. It also allows him to avoid some of the annoying and tedious aspects of the brewing process, giving him a chance to concentrate on creativity. Like several other contemporary brewers, Mikkeller pushes the limits of what beer is, and what it can become. Although there are always haters, Mikkeller is widely loved and respected in the modern beer spectrum. I’ll post a short documentary and a great NY Times piece at the end of this article, which provide some great insight into the widely popular and enigmatic brewer (I also wrote an article on Mikkel’s twin brother’s gypsy brewing company, Evil Twin. You can read it here if you are interested).

There are three beers to talk about today, and although they are most certainly beer, the alcohol levels push them into their own category of madness. As these bottles range between 13 and 19 percent, I’ll need to sip them pretty slowly; hopefully letting them suck the winter out of me. There is Mikkeller Black (17.5%), Mikkeller Black Tequila/Speyside: Mikkeller Black aged in Tequila and Whiskey barrels (18.8%), and Mikkeller Black hole (13.1%). All three are Imperial Stouts. I’ve had Black Hole before, but this will be my first time trying Black (or any of its variants); I’m both excited and petrified. I’m not sure what to expect as many gargantuan beers that push past 14% quickly turn into hot sugar bombs, which I’m not that into. Let’s do this! 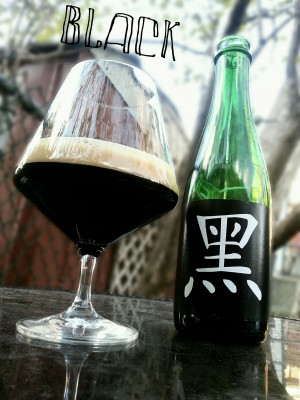 Black pours out super sexy, with a dense and thick head, which I wasn’t expecting in the least. I won’t lie, I’m getting some serious solvent, bordering on paint-like smells. I get a little metallic aroma too, but I often get that in big Imperial Stouts. Beyond that, I’m smelling some bread and cakey aromas, mixed with lots of rather inviting chocolate elements. I also get iced coffee, and something that reminds me a bit of Kahlua. Overall, despite some odd elements, this smells great.

Wow, it burns, it burns! At first I wasn’t expecting to love this. I actually thought all of these beers might be a mess, but this works, and works well. It’s hot, incredibly hot, with a body that’s not particularly viscous, as you might think. Instead, it has that general imperial stout profile, but with an over the top booze burn, and a massive (and I mean MASSIVE) bitter finish. Whatever sweetness there is, and there is enough, is so destroyed by the bitterness that it’s almost undetectable. Also, this is somehow quite easy to drink, which is crazy to me given the 17.5%ABV! There is this tasty chocolate rum cake thing going on, with some espresso and almonds. Again though, the bitterness is absurd, blasting all flavours off of your tongue in the finish, just like the meteor that killed off the dinosaurs. I think what balances this savage beer is just how extreme each piece of the puzzle is; it’s like flying into a volcano while riding inside a freezer.

As my palate adjusts to the most bitter thing my mouth has ever tasted, I can start picking out the sweetness a lot more. Still though, it’s not viscous, or off putting. This beer is probably hated by many; but not me, I’m digging this ridiculous monstrosity. It’s tasty, warming, and violently bitter – almost as bitter as I am towards winter this year.  I’m looking forward to aging one to see how it changes over time.

Black Hole pours out pretty thick with a head that sticks around, leaving a thin brown veil of sexy froth atop its jet black body. The nose has a similarity to black, but not as potent. It has this strong dark chocolate thing, unlike any stout I’ve had. You know that tangy bitter flavour you get from dark chocolate that has a really high cocoa percentage? That’s what I smell. Its aroma is quite boozy for 13%, and smells a bit like a spirit. It’s fruity as well, with macerated dark cherries, and oddly, some mango too (the hops I presume). It’s a bit earthy and dusty, but unlike the similar notes one gets from brettanomyces (wild yeast) – more like an old wooden crate or a leather sack.

Its body isn’t exceptionally thick, and the first thing that hits me is the fruit. However, like black, it’s extremely bitter, mixed with a very potent but balanced alcohol presence. It’s also a bit tart, reminiscent of cherry tannins. There are some fruity hops taking hold as well, providing a subtle tropical fruit complexity. Although containing some chocolate and coffee flavors, the profile here is quite different than your usual imperial stout. As it breathes and my palate adjusts to the excessive bitterness and alcohol burn, a sweetness starts to emerge, lending more character to the fruity elements, bringing out the berries and mango that much more.

Even at just 13%, I find this beer drinks like a spirit. It’s lighter body, and apparent ethanol push, makes it a great digestif. Despite its intense flavours, it’s super easy to drink, and goes down fast. I’d like more of this stuff.

After cracking open Black Tequila/Speyside, I can smell the whiskey within a few feet away, even in negative 30 degree Celsius winds (-22 fahrenheit). It has that token black aroma of dough and solvent that I’m now accustomed to (in an non off-putting way). Smells pretty nice actually; I get a lot of the spirits, mostly whiskey, with some of the tequila as well. There is a bit of oak, mixed in with vanilla, cake, and some oats. It’s more inviting than Black on it’s own, with a bit more sweetness balancing the sharp alcohol portions. I guess that’s the age on it.

Off the bat, it is a bit sweeter than black, with all kinds of burnt caramel and crème brûlée flavours. But that’s not all, not even close. There is this invasive mishmash of spirits, as if the whiskey and tequila were battling over who wanted to be the bigger school yard bully. Although it’s extremely warming, the alcohol burn is less apparent than in the original black. That being said, it’s still insanely hot, and INCREDIBLY bitter. So bitter in fact, that the ridiculously flavourful and intense palate bomb is quickly and effortlessly washed away in a sea of catatonic (tongue-drying) bitterness, leaving nothing but a faint hint of whiskey on my palate. Although ripe with similarities, this is a very different monster from black and black hole. As my palate starts to recover from being mercilessly violated, vanilla oak flavours start to emerge, mixed in with a whiskey soaked, doughy cake-like thing. It is followed by an unprecedented tequila zip, and like everything else, it fades into bitterness. However, the more I drink, the more I get the tequila, which is just so bizzare. However, it still functions somehow, in an absurd Japanese gameshow kind of way. It is sweeter than black, but the lighter body and post-holocaust-like bitterness really turns this Sasquatch into a relatively dry beer; almost like a digestif. If I really liked this beer, should I still be angry at Mikkeller for mouth-stabbing me?

Joking aside, I quite enjoyed all three of these beers. There is no question that they are intense on so many fronts (and that’s putting it lightly), but being a man who has a high tolerance for bitterness, I found them balanced in their own right. However, they are not for the faint of heart, so drink with caution and make sure not to perform too many complex acrobatics after polishing off the Tequila Speyside (although that might just happen anyway). And remember, when the depressing Quebec winter dick-punch starts to rear its northpole-esque absurdity, take note, and find yourself a big bad beer to make love to. It won’t even mind when you complain to it for the 67th time that you hate this season.

If you are interested in learning more about Mikkeller, check out this great NY Times article here and this short 25 minute documentary here.