This coming Saturday is the latest Brasserie Dunham bottle release party, and I can tell you that I’m pretty excited to attend (details here). The town of Dunham didn’t really mean anything to me until a few years ago when my girlfriend and I were invited to a folk music and artisanal wine festival located in the small town which resides in the Eastern Townships of Montreal. While there, we had the chance to sample various locally produced wines, honey, and some beers from a brewery called Brasserie Dunham.  Unable to find their beers in stores at the time, I kind of forgot about them and didn’t think much of it. About a year or so later, I saw that they completely re-branded themselves, and came out with a new and interesting line up of beers that quickly hit the shelves. This line up – sold in 355ml bottles  – consisted of several well thought out styles. There was a Blond Ale, a Witt, an APA, an English IPA, a Belgian IPA, and a Black IPA. Although all were good offerings, the APA and Black IPA are mind bogglingly good, and I encourage everyone to seek them out. 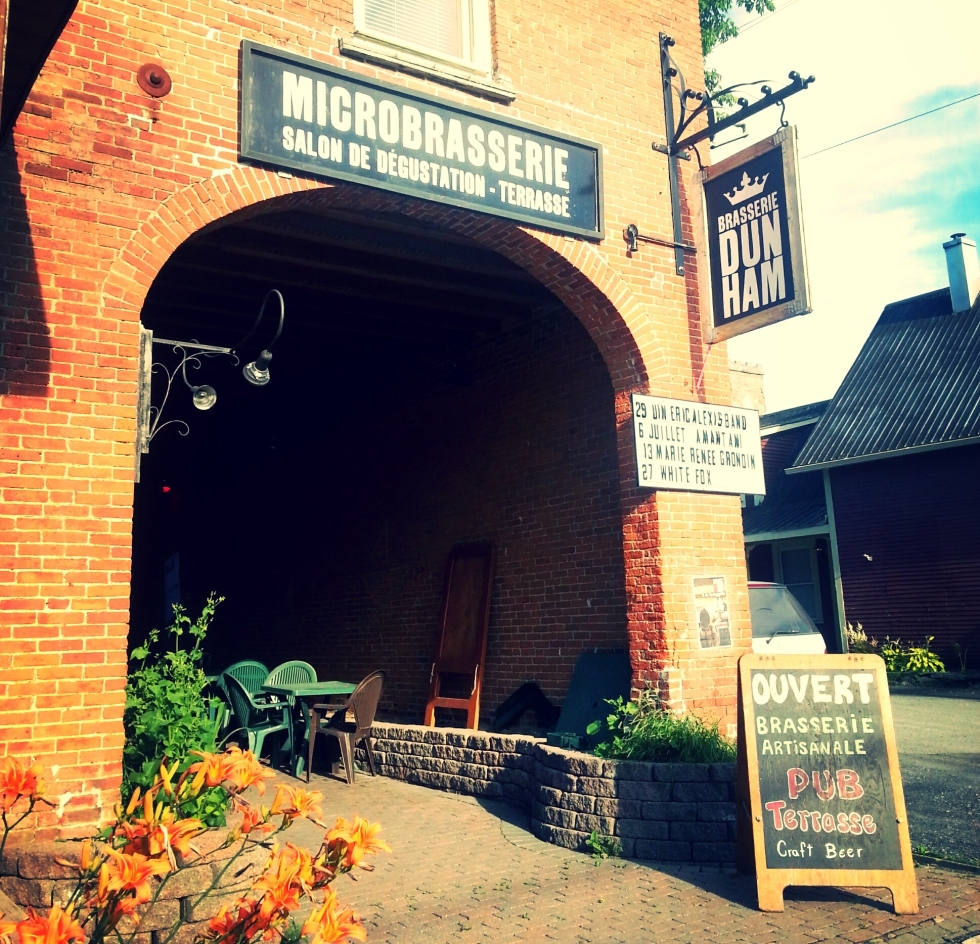 A while back, Dunham celebrated their anniversary, and hosted a party at the pub, releasing several barrel aged beers. It was extremely impressive how much volume they were able to produce. In my experience, when smaller breweries release barrel aged beers, they are in very limited batches and only a small group of people get their hands on them. I managed to get three bottles and will be writing reviews for them quite soon. As I mentioned earlier, this weekend Dunham will be hosting another party and will yet again be launching an impressive line up of barrel aged beers. One of them being their American pale ale combined with their Honey Saison, and then aged with wild yeast in barrels previously home to Zinfandel. Ummm, yes!!! 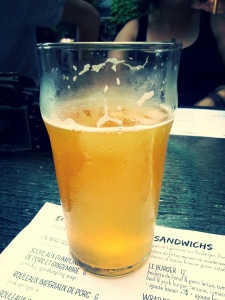 As I was mentioning earlier, we’ve been up to Dunham a few times. An old friend of mine opened a restaurant several years ago called Homei, and lucky for me, it is literally attached to Brasserie Dunham’s terrace. It’s run by Tom and Gina, a married couple and chef team of two, who each bring their culinary experience to the menu. I’m not certain if they would want to classify their restaurant as having a particular “style,” but if i had to I speculate, I guess I would call it Modern Rustic Asian Fusion?   They are a bistro that specializes in locally grown, seasonal produce, with a menu that varies from season to season. They work with local farmers, wineries, breweries, and honey producers to create an incredibly fresh and innovative menu. They have a pretty amazing partnership happening within the community, and for me, one partnership in particular resulted in the best beer & food experience I’ve had to date. That’s not to say that there isn’t decent food at some of the Montreal craft beer bars, but nothing like this – this is on another level. Sausages and cheese plates are fine, but to be able to sit on the terrace of a fantastic bistro, eating quality, locally produced modern cuisine, and also being able to pair it with a near perfect selection of beers is essentially heaven to me.

It was the beginning of summer and quite hot when we arrived in the late afternoon. We sat on the terrace and were greeted by Tom (co-owner) shortly after. He mentioned that it was an exceptionally busy day. This didn’t phase me in the least as all it meant was that I might have to sit there longer and drink beer – so sad. In the end we didn’t wait a second longer than we wanted to, and the service was exceptional. We ended up staying for hours, and they didn’t mind in the least. What’s amazing is that although they carry a few Duhham beers on tap, they also have no problem with you walking over to the Dunham pub (about six feet from where we were sitting) and purchasing anything you want to bring back to your table. I wasn’t planning on writing an article, but after experiencing the amazing symbiotic food/beer relationship they have going on, I felt that I needed to express some love. So because I didn’t plan on writing anything, I didn’t take any notes, which means that my usual nauseatingly long descriptions will be much shorter, and likely incomplete in some areas given that it’s all from memory – especially the food, sorry Tom & Gina. not to mention this was several months ago.

Back to the dinner at hand. I walked – ok I ran – over to the Brasserie Dunham bar and ordered their “Double Dose Westcoast IPA.” This isn’t something that has ever been bottled, so I was excited to try it. It was exceptional, like REALLY exceptional. After the first sip I knew I wasn’t having just one. The nose was beautifully fruity with loads of citrus and other tropical aromas. It was bitter, but not overtly so, with a great fruity presence, and a full, almost creamy mouthfeel. It was a prime example of what a good American IPA should be – something that Quebec breweries are finally pulling off very well. for dinner i started with the beef tartar; it was creamy and flavorful with a nice spicy kick. The IPA matched the dish well, providing a bitter companion to the heat. Normally I would try something different as my second beer, but I couldn’t resist. I ordered another “Double Dose” to go with my main, which was mussels in a lemongrass and coconut milk base. I don’t usually order mussels, but I had their Thai red curry mussels last visit and they were fantastic. They come in a nice big bowl, still steaming. The aromas are incredible, filling my nostrils with lemongrass, cilantro, and a sweet, almost nutty undertone. They tasted just as good as they smelled; salty and tangy, with a spicy lemongrass pungency, mixed with a rich and robust coconut milk base that complimented the freshness of the shellfish. The earthy and grassy IPA worked again here, cutting through the rich and spicy flavors of the dish, while also adding a fruity compliment to the whole thing.

For dessert I ordered their warm chocolate brownie with vanilla ice cream, and to match this wonderful thing I also grabbed Dunham’s beautifully hoppy “Lapatt Porter.” I’ve had it several times in the bottle, but never on tap. The nose begins with some dark chocolate and roasted coffee beans, followed by a beautiful bouquet of floral and zesty hops, resulting in a fantastic combination of aromas. On the taste front it is very similar, starting with coco, dark roasted coffee and then quickly moving onto piney and zesty hops. The brownie was brilliantly sticky and chocolatey. When tasting it with the Porter, the beer helped cut through the sugars, giving a bitter coffee and slightly fruity element to the whole thing. They worked perfectly together.

The staff at Homei and Brasserie Dunham were fantastic; they were friendly and efficient and although we were there for hours, it felt like no time. Mind you, I had about four pints in me which helps. Dunham really is a beautiful little place, and I really encourage everyone to check it out; there are always things going on.  Before the restaurant we randomly stumbled upon an outdoor vernissage, complete with waiters passing around hors d’oeuvres. We cracked open our picnic basket and had a seat in the sun with a nice bottle. Just think, it could be your son stealing your beer! The most important lesson here is that you should drink beer from Brasserie Dunham, and if you are going to, why not also take a day to drink it from the source – you will not regret it.