Dieu Du Ciel’s L’Exorciste can’t be purchased in stores, and actually, it can’t be purchased at all anymore. It was gone as quick as it came. To procure some, I had to drive about 45 minutes to St. Jerome, a city just outside Montreal, where the original Dieu du Ciel brewpub is located. L’Exorciste is a wheat beer that has been spiked with four kinds of wild yeast and then aged in French oak for 18 months before being bottled. I’m extremely excited to try this one. I’m expecting something quite sour and complex, which is why I didn’t mind the higher price point, as well as the long drive out to get some. This basically comes with the territory, being an enthusiast in the beer scene right now.

The beer world is blowing up, and like me, a lot of the people who are into it, are REALLY into it. Many of us have turned fanatic, and go to huge lengths to get our hands on particular bottles. Illegal trades through the mail, traveling long distances in order to make these trades, going to foreign countries to either ship back or bring back bottles, incessant research and discussions on the internet; these types of actions are pretty normal for beer geeks. The question I wanted to ask is why does beer seem to carry with it such an obsessive, almost Starwars-esque fan base? That’s a hard question to answer. Perhaps it’s a simple bi-product of the fact that although craft beer is growing exponentially, it is still pretty “independent” and somewhat “underground.” The beer world is booming, but still only budding, and those who want the good stuff are basically taking part in a “wild west” infrastructure, with bartering and trading at the forefront.

Sometimes I like to  think about what things will be like in twenty years, and presuming that the craft beer industry continues growing, specifically what will it be like to walk into an SAQ (Quebec), an LCBO (Ontario) or a Liquor store (USA, etc..)? Right now, if you want wine, you walk in and peruse the aisles, perhaps looking for something to go with your meal. The isles are filled with examples from around the world; Maybe a Malbec from Australia, or a Cabernet Sauvingnon from California – the choices are exponential. These wines range from ten dollars to thousands of dollars, and the whole store is pretty much dedicated to it, with many employees trained to help you. Wine lovers are spoiled with and array of choices coming out of their ears. I’m not saying this because I’m jealous – although I am – but rather because I’m curious if one day I will be able to walk into any SAQ and be able to choose from a plethora of rare,  barrel aged, or wild yeast infused beer, without having to do a bunch of research, or travel to a brewery and line up to get my hands on something that will be sold out in minutes/hours/days. I can imagine talking to my son when he’s thirty years old, saying “Son, when I was your age, if i wanted that Bourbon barrel aged, Brett infected Russian imperial stout, I had to make damn sure I knew the day it was being released, and either go to the brewery myself, or trade one of my other beer gems to some guy to get my hands on it. And it snowed more back then too!”

Perhaps one day these “rare” beers will carry a broader distribution, making the supply bountiful enough to meet demand, as apposed to now where a niche group of freaks scramble to taste them. Don’t get me wrong though, and this is extremely important to understand, this lack of availability brings people together in a fantastic way. Because of the need to trade, to do research, and to communicate over release dates and so on, a strong community has developed, and many friendships have flourished as a result. The beer cult is growing, and it’s not creepy in the least. People are incredibly generous, supportive and downright friendly. We love beer, and as a result we love each other. And Before I start holding hands with people and singing Jefferson Airplane, I’m going to move on.

Exorciste pours out a foggy orange yellow color with virtually no carbonation; just a small ring of fizzy bubbles resting on top. They are quite large, reminding me of beer poured from a cask.The aroma is rather complex. with some comforting autumn smells, like apples and spices – cider like. Smells like the perfect beer to have on a cool fall afternoon in the sun. It smells tart and acidic like apple juice. There are loads of woody components, similar to what you find in the nose of a scotch or whiskey. The French oak really comes through, giving off aromas of earthy vanilla, and hints of rubber. 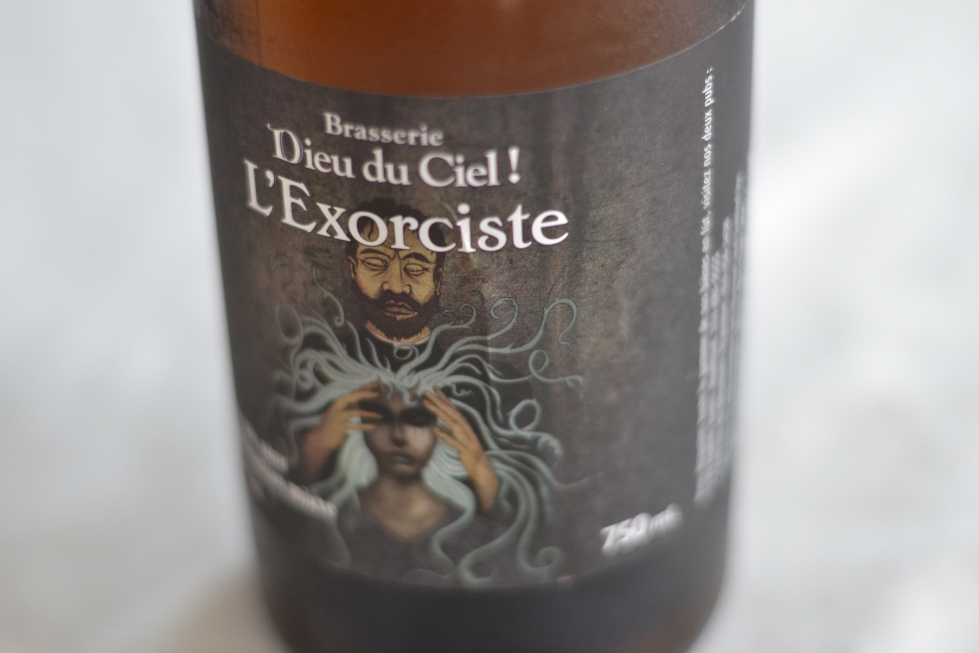 It is only slightly sour, much less than I anticipated. A little less complex than the nose, but still quite exquisite. It starts off a bit fruity with some tart elements, reminiscent of white wine or a dry cider. It finishes with a lingering sourness that’s mixed with strong oak flavors, consisting of vanilla, wood funk and some spices like cloves, allspice and cardomon. I kind of want to cuddle up inside this beer. There is certainly a big apple element here, with a strong cider like presence. This is making me wonder why they don’t age cider on oak. That would totally work – maybe they do, what do I know? It shares similarities to wine as a result of the oak aging; it reminds me of sitting on my father in law’s couch drinking a big and bold Australian red. It’s interesting to pick out the flavors that come off the wood, and it’s making me realise that drinking other things besides beer will likely improve my ability to pick out these similar flavors, and expand my palate. What is truly interesting with this one is that the oak really shines through more then most beers. That’s not to say that Bourbon barrel or whiskey barrel aged beers don’t carry enormous flavors, but rather that those beers have a huge whiskey or Bourbon flavor mixed with the oak. This is all oak, and the the beer isn’t so sour that you don’t pick up on it. This is also quite drinkable, I had the 750ml bottle to myself over the course of the evening. It’s complexity flourished as it warmed, and at 5%, it was no struggle finishing the whole thing.

So just to bring it all back to my earlier rant for a second; as you can see from the fact that I practically had sex with this beer, it was totally worth having to trek out and spend a bit money. That being said, I do wonder if one day finding “rare” beer will be a much simpler process; but even if it is, I’d still miss the game of it all.

When the sun goes down tonight, The Chin Wag is back! @baospodcast @hopsandbros @nathandoesbeer @5ebaron
@bieresjukebox began 10 years ago as a small contract brewery, delivering some of the first American-influenced hop-forward beers that this province had seen. From there they evolved with the times, creating more contemporary styles and interesting concoctions over the years. That said, for their 10th anniversary, Jukebox is shifting directions and going forward they will be heading back to the basics and focusing on classic American beers. These are their three brand new beers! @bieresavantgarde
Exciting news today! For the first time Beerism will be offering original articles written entirely in French! And what’s even more exiting is that this content is being written by one of the francophone beer media writers I respect the most. @la.chopine delivers beautiful photography and exquisite tasting notes – she carries with her a seasoned and intimate knowledge of the beer scene, and will be writing with a particular emphasis on the Quebec City beer scene.
Tonight at 9:00PM we drink a special anniversary bottle from @5ebaron for The Chin Wag! Join @baospodcast @nathandoesbeer @hopsandbros and me for another fun chat.
This is “J’peux pas sentir ma face…”, a 14.5% imperial stout aged in rum barrels from the good folks at @bieresavantgarde
For the 25th episode of The Chin Wag we are going to be drinking “Trippy Rock” from @5ebaron and chatting all things cannabis! Join us live here on Instagram at 9:00PM Eastern. @nathandoesbeer @baospodcast @hopsandbros
Today @bierelagerbrau releases a brand new beer called Výčepní at @bieresavantgarde ! I’ll be there enjoying pints on their killer terrace!
@bgbrasserieurbaine released two beautiful bottles recently. First is FAUNE, a blend of mixed fermentation beers with no less than 5 different beer cultures from BG and @nanocinco . Following the blend, the beer was refined for 3 months in a barrel of red gin from the Distillerie @distillerie_stadacone
Going live at 9PM! @baospodcast @5ebaron @hopsandbros @nathandoesbeer
Did anyone have a chance to try my latest collaboration with @bgbrasserieurbaine ?
…After drinking sample after sample and trying to create blend percentages that incorporated several beers, we realized that there were two outliers that stood drastically above the rest. When combined, they were perfect and any new additions to the combo simply took away from it instead of the desired compliments. Ultimately, the end product consist of a big lactose-infused imperial stout, aged for 10 months in Jim Beam Bourbon barrels alongside a “double mash” Imperial Stout aged for 6 month in Widow Jane Bourbon barrels.
This is BLENDISM!!!
I can’t believe it’s been 4 years since @4originesbeer opened their doors for the first time.
@ministereipa is a side brand from @monsregius where they will be concentrating on all thing contemporary and hop-forward. This here is their first IPA callees “Décleration Iniciale”. Nose is tropical up front. Lots of mango and papaya cokes lol though on the aromas alongside amble zesty funk. The palate is zesty up front as well, with lots of very ripe fruits like mango and tangerine, while a bit of coconut-forward Sabro layers peek in. An ample body rounds things out, while the finish is a touch sweet, but still well balanced enough. I’m anxious to see the evolution of these beers.
Tonight live on Instagram! 9PM! Come check us out. Special guest @bebothoughts from @thirdmoonbeer !
@smallponybarrelworks has been the quintessential American inspired barrel-aged sour brewery of Canada ever since they opened their doors a few years back.
The Chin Wag again tonight. Live here on Instagram at 9PM EST with @baospodcast @nathandoesbeer and @hopsandbros - always drinking a @5ebaron beauty.
"C’est Juste d’la Bière" is a collaborative project between myself, @voxandhops , @hoppy_bitch , @baospodcast , @_la_canette_villeray_ and the amazing @bgbrasserieurbaine .
My latest collab!!! Come get some today! Also, Monstrolicious forever!
I miss black IPA and lately I crave a good black lager. Well, @bgbrasserieurbaine teamed up with @kahnawakebrewing to create “Premier Lien”, a Black IPA - abs I’m here for it!