So I’m getting more and more excited these days about how beer changes and develops over time in the bottle.  Because I’m relatively new to the world of being a beer geek, it’s only now that I can really start doing proper age comparisons. One, because I have a cellar, and two because I’ve learned to be patient, allowing myself to hold on to bottles for extended periods of time. This is definitely a difficult thing to do when you want to drink something tasty, and you just so happen to have something incredible a stair climb away. However I’ve always been a bit of a pack rat, and a bit of a collector, so it really isn’t too hard for me to hoard bottles. A few months back, I wrote an article comparing two bottles of Fullers Vintage Ale; one that had sat in my cellar for a year, and the other, a fresh one. Please check it out here. Fuller’s Vintage Ale is meant to be aged – it actually says so on the packaging – so the results were likely going to be positive from my perspective, and we were not surprised when they were.

There are certainly no hard-set rules for what types of beer you can age; that being said, some bottles will age much better than others, and some will just eventually taste bad. One very important thing to understand is that a lot of the hop flavors found in a beer will diminish over time, which means if the beer’s main focus is the hops – like an India pale ale – then aging it is likely a bad idea. That being said, if the alcohol content is high enough, then you can can age a hop-forward beer, but you might not want to, because the original intention of the brewer might be left behind, and you will be left with something completely new. This isn’t necessarily a bad thing, but if you are going to do this – and this applies to all beer styles – it’s best to have purchased two of them, trying one fresh, and the other aged. 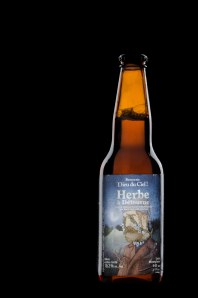 Herbe a Detourne is one of, if not my favorite beer from Dieu du Ciel! And that is saying a lot, as they arguably make some of the best beer in the world. This bad boy is a North American triple made with Citra hops. Citra hops are an American aroma hop variety that adds a fantastic, citrusy tropical fruit flavor and aroma to the beer. This is quite a big beer, clocking in at 10.2%, which is one of the reasons I thought it might age well. As I said, this is one of my favorites, but the high alcohol level gives off a strong boozy bite, and I’m curious to see how, or if it mellowed out in the last year. I needed help with this; I could probably drink two of these over the course of an evening, but certainly not at the same time, which is best when doing a comparison like this. Luckily I didn’t have to break T.J.’s arm to help me with this one, he was more than willing.

We poured both of them out into a couple of tulips; there is no question about which is the “aged” version of the two, as the 2012 has a richer, darker, and foggier deep orange color, as compared to the 2013, which carries a clear light copper orange, resembling an IPA or an American Pale Ale. As I was pouring them out, I could smell the Citra hops from about a foot away. Drooling commenced.

I got my nose right into the 2012; the first thing that hit me was honey, lots and lots of honey. Floral, with sweet caramel, followed by some ruby red grapefruit and orange zest. The richness here is uncanny. Onto the 2013; as expected, the hops are far more present, giving off loads of citrus fruit, with a pungent grapefruit, and lemon aroma. It is quite boozy as well, showcasing a serious ethanol character, that mixes well against the big citrusy backdrop. There is a freshness here that makes the beer inviting, but in a completely different way from the 2012. 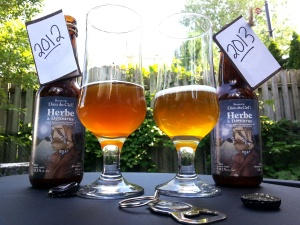 Now that our senses have been teased by all these wonderful smells, it’s time to taste! Again we begin with the 2012; wow, it’s quite boozy, I wasn’t really expecting that. The hops have diminished quite a lot as I presumed, but they still make themselves known, lending some balance to the beer. T.J. said aloud, “tree sap in honey,” and I think that really summed it up pretty well. There is this floral, herbal, and piney honey-esque flavor that hits you right off the bat. I’m also getting loads of apricots, and oranges, with  far less citrus fruit than I recall from the fresher version. There is also a slight star anise flavor resting in the background. Certainly like in the aroma, this beer has become much richer on the palate, with a high level of complexity that may not be for everyone, but is certainly for us. It finishes with a big tangy ending, while being only moderately bitter. As I mentioned, the alcohol is sill very present, however it has smoothed out, lending more of a port type of character, as apposed to something sharper, like vodka.

Ok, onto the 2013! Ah yes, I remember this, I love that citrus punch right off the bat; the hops are certainly the star of this one. Tropical fruits galore, with lemon, orange, mango and so on. Delicious. It is certainly very boozy, however much sharper than the 2012, carrying an ethanol punch that manages to compliment the bold Citra hops. This is quite a brilliant beer in my opinion, because the alcohol is really not all that hidden behind any of the other flavors, but rather seems to be purposely placed there, in order to match the incredible citrus hop presence. There is a majestic simplicity here that I love – a balance of big flavor impressions. Imagine how you spike vodka with a twist of lime, this is what I’m getting at. And although this is a huge beer, with loads of hops, it is not exceptionally bitter.

Well there you have it; both specimens are a thing of beauty, each showcasing different flavor profiles in taste, and in smell. I’m glad i did this and I look forward to doing the same thing in a couple of months when 6e Soir comes out, which is their delicious imperial pils. Look out for more comparison articles soon!

I also have to mention that the beautiful photography you are seeing in this article was done by a friend who wants to remain anonymous. obviously I’m talking about the studio shots and not my lame backyard photos.