Posted by beerism on March 3, 2013 in Food Pairing | Leave a comment 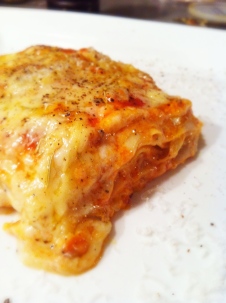 So once again I found myself home alone with my son – now about 9 1/2 months old.  He had just gone down for a nap,  and instead of being a normal person and taking some time to relax, I decided to use what’s lying around in the fridge and cupboard to roll out some pasta dough and make a lasagna from scratch.  Now this could have either gone well or horribly wrong, as his naps can be twenty minutes or two hours depending on how he feels. I guess being the risky person I am, I went for it.  After checking out when we had,  I seemed to have everything needed to make a pretty good lasagna.  I found a pretty cheap can of pasta sauce in the cupboard that will have to do, but I just figured I needed to step up some of the other ingredients in order to counter the blandness from the cheap sauce. We had some heavy cream, french shallots, and white wine, so I decided to make a cream sauce to go in there too.  Normally I’d use mozzarella for a lasagna, but we don’t have any.  However, we had a crap ton of “very old” cheddar that will have to do – and actually, I was pretty excited at the idea of making a whole lasagna with aged cheddar.  I had only made a lasagna with fresh pasta once before; it turned out amazing, but it was a lot of work.  I was hoping this time I could cut it down and get through it quicker, and in the end, I was successful.

Next came the most important thing to think about; what beer to pair with this meal!.  Paring beer with meatless dishes can be a bit more challenging, but that’s not to say that you can’t find something great to match.  My cellar is getting a little on the ridiculous side with the amount of beer I have down there.  Most of what I have is age-able, but I sometimes forget that I need to drink the stuff that’s not.  I still had a couple of beers from the Beau’s 6 pack that came out this autumn, one of which was a Belgian Pale ale called Koru. Belgian Pales are some of my favorite beers to drink alongside a meal.  They have an apparent, spicy flavor, while not being big enough to overpower lighter foods, such as vegetarian dishes, chicken, and pork.  I was excited to try these two together; making pasta from scratch gives the lasagna a certain richness from the eggs, but also lends a delicate light mouth-feel, which would pair nicely with this style of beer.

So to start i needed to make some pasta dough.  The measurements that always work for me are 3 eggs and 2 cups of flour.  I use my kitchen-aid mixer, but you can also make it by laying the flour out onto a cutting board, making a well, and placing the eggs into the middle, while slowly adding flour into the center. It’s certainly the messier option, but it allows you to be more hands on, which can be a lot of fun. But anyway,  I sifted the two cups of flour into my mixer, set it to low, and slowly added three eggs that I had previously whisked with a tiny bit of oil and a pinch of salt. Once that mixed and kneaded a bit, I pulled out the wad of dough and worked it with my hands for another five minutes or so.

Now that the dough was kneaded, it needed to sit for at least 30 minutes to allow the gluttons to bind.  Emery is still sleeping – so far so good. While the dough sat, I thinly sliced some shallots, chopped some garlic,  and tossed them into a cast iron pan with some butter.  I let them simmer for a few minutes, and once they were translucent, I poured in a few cups of white wine.  That needed to reduce, so I to let that go until most of the liquid was gone.  At that point, I poured a few cups of cooking cream into the mixture and let it simmer, allowing it to reduce as well. I didn’t have have fresh herbs, so i added some dried tarragon with a good amount of freshly ground black pepper.

As the cream sauce was going, I cracked open that can of crappy marinara sauce and got it ready for pouring.  I also grated the entire giant brick of aged cheddar in order to have it ready to go. Thirty minutes had passed so I could now roll out my pasta – luckily Emery was still sleeping! I cut the dough into 4 pieces and went one at a time, rolling it out extremely thin, almost to the point that that it resembled paper.

This basically requires that you to go all the way to the lowest setting, however this also means that the sheets become very delicate and hard to handle. Because of this, you can produce more sheets, as each one has less actual dough.  Rolling out the dough takes a bit of time, so in between rolling, I was able to finish off the cream sauce; adding some more  dried tarragon, freshly grated Parmesan, and salt &pepper at the end. 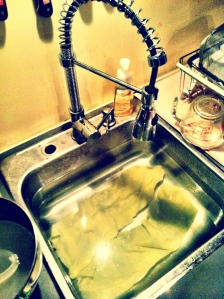 In an ideal world, you could simply take the rolled out pasta and start making the lasagna. But sadly, I needed to blanch the strips in boiling water prior to constructing the dish. This is always an annoying process, because in order to immediately halt the pasta from overcooking, you need to take the pasta sheets from the boiling pot and place them into ice cold water.  I don’t enjoy this all that much because it involves getting a bunch of dish towels to dry the dripping sheets, you inevitably burn your fingers at some point along the way, and there’s just a lot of general running back and forth.  I’m not sure about everyone else out there, but when it comes to making pasta, I had to become a bit creative.  I always use a clothes drying rack to hold all my pasta sheets, and the kitchen sink became my pasta cooling chamber.  You’re probably wondering what was going on with my son – 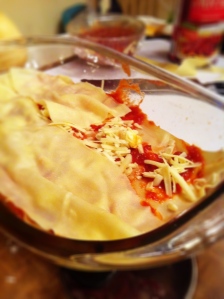 well maybe you weren’t but I’m going to pretend that you were.  Well, he basically woke up three quarters of the way through this whole boiling / cooling scenario, which although is good that it wasn’t earlier, it was still a challenge none the less.  Luckily he wasn’t in the worst of moods and happily (sort of) sat there while I ran around like an idiot.

So I started constructing the lasagna, interchanging the red sauce with the cream  sauce as I layered the many, many, very thin sheets – of course adding a lot of that extra old cheddar throughout.  This didn’t take too long, and once I had topped the dish with a thick layer of cheese (including some Parmesan), it was ready for the oven.

As the lasagna was cooking at about 350 degrees Fahrenheit, I popped open the bottle of Koru. It poured out a nice and bright, kinda foggy orange color, with some yellow highlights. On the nose, I was first unsurprisingly hit with some tasty spicy Belgian yeast aromas; it was bready, zesty, with hints of cloves. There were also lots of fruity aromas, with some bubblegum yeast esters, and some floral hops making an appearance in the background.

Lets see how it tastes. It was quite creamy, with some sweetness, and a bigger body then expected. Most Belgian pale ales I’ve had were bottle fermented, and this one doesn’t seem to be. It is quite earthy, and spicy, and contains what tastes like orange peel. It ends with a strong, tangy bitter finish that rests on your palate until the next sip.

So at this point, my lovely partner Genee was home and could keep an eye on Emery while I finished with the lasagna. When I pulled it out, it had this great crispiness around the edges that looked exactly like freshly backed fillo dough. I let is sit a little while to cool down before digging in.

So after a few minutes of letting the dish cool, I cut into the lasagna and served it onto some plates. Because it was so fresh, you couldn’t see all the layers, but it certainly tasted great.  It was rich, but delicate, with a certain pungency from the strong cheese. What I love about fresh egg pasta is that it makes the dish heavy and light at the same time.

In pairing these two delights, I’m first struck by how much the pasta brings out the earthiness of the Belgian yeast, which matches and compliments the sharp cheddar perfectly. The beer helps bring out the tomato acidity, which was lacking slightly on its own.

The hops, which were not overtly present in the beer by itself, came alive when combined with the all the flavors in the pasta dish.

Overall, I’d say this was a success. Both the lasagna and the beer were delicious by themselves, but were both improved when tasted together.  Beer is incredibly versatile, with the ability to pair it with a plethora of different dishes.  However, there is a certain challenge involved given the multitude of beer styles, which all carry particular focal points that need to be considered when pairing. In my eyes, this fact is more detrimental in beer pairings as compared to wine, but that could very well be because I simply don’t know wine as well as I know beer.