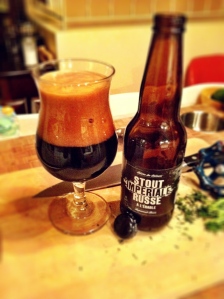 If you live in Montreal and you ever venture out to the eastern townships, there is great little town called Dunham. I’ve been there a few times and always stop in at “Homei,” a fantastic bistro owned by an old friend of mine. Being in Dunham is relaxing, and Homei definitely keeps up with that vibe, offering well crafted dishes using locally sourced ingredients, with a welcoming atmosphere and staff. They also share a big beautiful terrace with Brasserie Dunham, a brewpub that also produces a large line of bottled beer. Dunham has recently revamped their image, and their beer line up; producing a wide range of styles, but mainly focusing on North American and Belgian influences.  They are quite busy it seems, I see more and more one offs hitting the shelves every week. They do have a main line up however, consisting of about six different beers all packaged in a six pack format, with very minimalistic labeling imagery.  I have had most of those offering, but from a tasting perspective, I haven’t begun to scratch the

surface on what they have been putting out lately.  The most notable for me so far was their Black IPA (image to the right). A new style on the rise – it’s a hybrid beer, combining the color, body, and flavor of a stout with the intensely aromatic, bitter, and floral hoppy character of an IPA.  They really did a solid job with that one. If you are interested, you can click here and read a quick review from my Facebook page (probably full of typos). 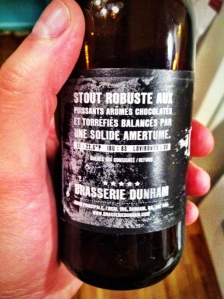 Today I’m going to be talking about their Russian Imperial Maple stout. I’ve spoken in a past about the significance of the “Russian Imperial” naming convention and what that means style of beer. I’m not going to get into it again, but very simply it means a highly alcoholic stout – usually from 9 – 12% ABV. For a bit more of an explanation on the style, click here to check out another entry I made from a few months ago about St Ambroise’s Bourbon Barrel aged RIS.

I’ve been toying with cellaring beer, and had been holding on to this one for a while; I think about 10 months or so. I had recently cracked open a beer of similar alcoholic strength, and was not happy with the results. So I’ll admit it, I panicked a bit and cracked open a few from my lower end of the alcoholic spectrum collection that I had been holding on to – this being one of them. I had kind of forgotten that I had it, as it was all tucked away in my basement. 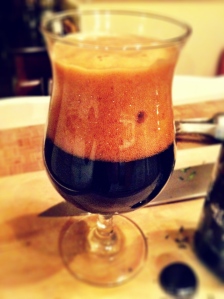 On to the drinking. It poured out a thick, almost syrupy black color, then it foamed up like crazy.  I was taken back by the carbonation, the head climbed to about five fingers high in my tulip glass – monstrous! The aromas were fantastic, with sweet chocolate fudge cake mixed with coffee and general roasted smells. Then followed by an obvious earthiness resulting from the yeast bomb that went off, which clearly caused this massive head eruption. Again there is a lot of sweet smells coming off this beer, with an almost chocolate milk essence floating around and some tangy hops mixed in there too, providing a zestiness of sorts. 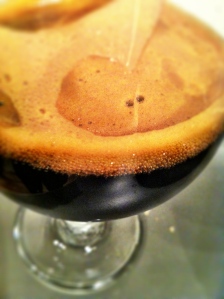 The taste matched the nose quite perfectly, without any surprises.  It had a very rich and big body, with a nice effervescent mouthfeel from the carbonation, which helps makes this heavy beer go down easier. Lots of dark chocolate fudge and coffee, with that earthy yeast presence, and a long tangy and bitter ending that cuts the sugars nicely and sits with you until your next sip. There is clearly a big tangy hop presence here too, but it certainly is not the show runner and only helps compliment the rest of this dark roasted, malt heavy brew. I was quite pleasantly surprise with this one, I haven’t been taken back by a RIS in a while, but this one impressed me. I believe it’s actually getting re-released very soon, keep an eye out if you are in the Quebec region – this ones a keeper.