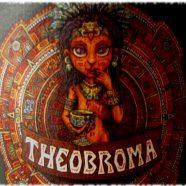 Dogfish Head: Theobroma – An Ancient Ale with a Chocolate Twist 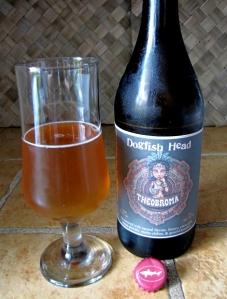 Some of the more eagle-eyed readers of this blog may have noticed that despite being based out of and very interested in the Quebec craft beer scene, there are an awful lot of reviews of imported beer here. In my defence, once I started experimenting with craft beers, my light interest has turned into a full-fledged hobby. I have started making excuses to drive to Ontario to buy beers our liquor commission won’t carry. I even ask friends traveling out of province to bring me back anything new and exotic. All I can say is that there can never be too much of a good thing.

I came across the Dog Fish Head brewery after watching the eclectic owner on a short-lived Discovery channel TV show called Brew Masters. Originating in Delaware, these beers can be found all over New York and Vermont state so, next time you head to the big apple, leave the I Love NY t-shirt and pick-up a 6-pack for a souvenir that you can share with your friends. Today’s review is of Theobroma. Considered an Ancient Ale, it’s in the brewery’s occasional rarities collection due to its once-a-year release. According to archaeologists, cocoa was being used to make alcoholic drinks as far back as 1,200 B.C. Dog Fish Head went on an Indiana Jones-like adventure to track down ingredients like: Aztech cocoa, cocoa nibs, honey, chillies, and annatto (tree seeds) to re-create this traditional beverage of the Gods. So, let’s get to it! 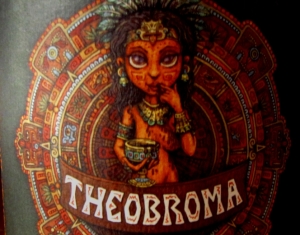 A light-colored chocolate beer? The chocolate here isn’t meant to be overpowering like what you might find in a stout. Rather than roasting barley to give a chocolate-like flavour, Dog Fish Head uses an ancient method of fermenting the cocoa bean in the nut to extract pure, but very subtle cocoa taste.

It has a rich honey-golden color and is cloudy in the glass like a witbier. I noted some yeast deposit at the bottom of the bottle when holding it to the light. Very low carbonization resulted in almost no head and just few bubbles around the edge of the glass.

Lively sweet notes of candy, white chocolate and fermented honey greeted my nose. Between sips, and as the beer warmed, there were complex citrus notes almost like an ice wine making it almost as fun to sniff as to sip.

PALATE : This beer has as velvety smooth feel that wasn’t creamy. The sweetness is subtle with hints of earthy cocoa, suggestions of vanilla and something which, for me, expressed light lemon and grapefruit citrus flavours much like a dessert wine.  The finish was spicy yet, much more subtle than the peppery spice you find in some strong IPAs . It had a warming affect rather than burning, which blended well with the alcohol, leaving a unique and pleasant aftertaste. For those of you who appreciate bold new flavours, Theobroma was a well achieved experiment in taste. I could easily have shared another bottle and recommend to those who find it to do as the ancients did and drink it on special occasions.

A review by T.J. Blinn