Rogue Ale was first founded in 1988 in Oregon and for the last 24 years, they have been brewing award wining, big and bold beers for the American public. Until now, I have not had the opportunity to taste what I presume to be some great offerings.  Today, I`ll be reviewing both their “Dead Guy Ale“ and their “Double Dead Guy Ale.“ The professionally shot bottle photography was taken for me by a talented anonymous friend.

Rogue`s flagship beer, Dead Guy Ale, is an American take on a German style called Maibock, or Helles Bock, which is basically a lighter colored, more hopped  version of the traditionally darker and maltier Bock beer. The Double Dead Guy Ale is what’s called an American Strong Ale, which from what I gather, is a catch all category, reserved for higher than normal alcohol leveled American style ales. They can range, but from what I’ve read, they are generally well hopped, sweet, and with a big and bold body.

So let’s start with Dead Guy Ale! It pours out a nice orange amber color with some red highlights. It’s a bit foggy and has a nice tiny frothy head that sticks to the sides of the

glass nicely.  It looks a lot like an American style IPA.  The Aroma is quite malty, with some caramel, and a bit of fruit – apples and strawberries mostly.

At first this one threw me off a bit, which is quite a good thing, as you get tired of predictability all the time. At the start I got some fruitiness, and nice malty caramel flavors.  The finish is what threw me though, there was clearly hops here, because it was quite bitter, but the bitterness was preceded by a tangy, almost slightly sour taste that lead into the relatively hefty cutting bitter end.  This was a particular flavor that I’ve tasted before, but I could not put my finger on it.  It was only when I read the ingredients that it occurred to me.  There is a variety of hops called Saaz that is found in Pilsners, so I was recognizing it from there.  There is a certain piney taste from this type of hop that helps make Pilsners so crisp and refreshing.  In this particular brew, it lent quite a lot of flavor and balance to the beer in a way that was quite different then the usual fashion found in a light lager.

As it warms, some of the sweetness starts to emerge, complementing the piney, tart hop character quite well. It reminds me a lot of tart & tangy fruit, reminiscent of slightly under ripe apples or strawberries.  The long bitter aftertaste almost has a citrus rind quality, similar to when you eat marmalade.

Dead Guy Ale has a medium body, with a good amount of carbonation.  The hefty hop content seems to help hold the little amount of foamy head together.  There was a small ring that rested on top of this one until the last sip.

Now on to the Double Dead Guy Ale! I love the bottle on this one, it’s painted right on there.  It pours out a gorgeous orange amber color with a great frothy one finger head that sticks around.

The aromas are quite spicey, with lots of pepper, and hops. Like Dead Guy Ale, I’m getting a lot of hops on the nose, particularly Saaz hops again, which have that tangy, Spicyness to them. There is a lot of malt in the aroma too, with some caramel hints and some red fruitiness – possibly from the esters.

Wow, there is quite a lot of pepper on the palate up front. I’m then getting some nice sweetness, balanced with some tangy fruity flavors which is finally cut by a hefty bitterness.I’m also getting a bready, sweet shortbread flavor as well. It’s almost like nibbling on caramel covered strawberries, with some freshly ground black pepper, and citrus zest sprinkled on top – An awesome mess!

I really enjoyed both of these, and I particularly enjoyed the fact that the double dead guys ale was spot on;  it was really just a stronger and bigger version of the first. I’m very excited to try more from Rogue. If I can get to the states, I’ll certainly get some more! 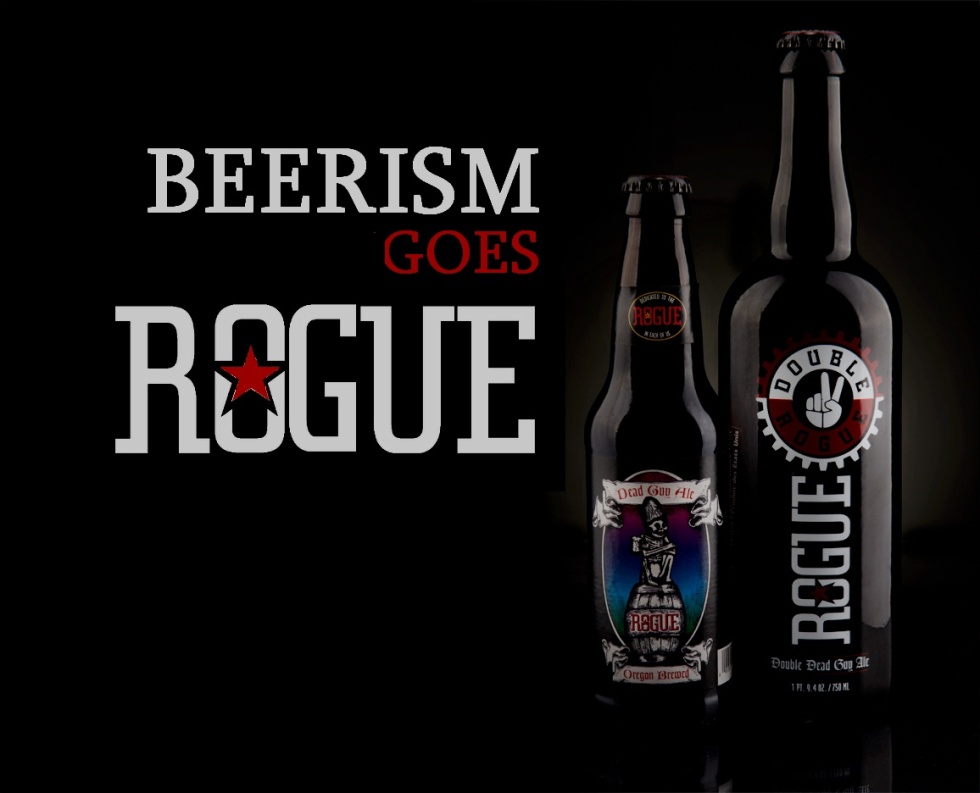