So my friend Ryan and I – who moved to Calgary several years back – decided to begin trading beer through the mail.  As you might be aware (or not), it can be quite difficult getting beer from outside of Quebec; when you are in Quebec that is.  Really, our only choices here are either macrobrewery distributed products, or the ever so limited selection at the SAQ (Quebec liquor commission). Now, if you have read any of my posts, you know that I`m a huge advocate of the Quebec craft beer scene, however what I`m not a fan of, are the limitations surrounding beer importation in this province. I can get a Heineken from Holland and a Sapporo from Japan at any store in the city, but not a single beer from Ontario or any other Canadian province. Silly rules!

So yes, I just received my first trade and decided to pop open this interesting looking Double IPA from Edmonton. The brewery is called Alley cat and this is my first by them.  They have a series of Double

IPA`s called “Dragon Series,“ that are going to be released every two months using a particular type of hops. This one, specifically labeled “Indigo dragon“ seems to be advertised as their most potent of the group, using Warrior hops for bittering and Cascade hops for finishing, in order to give some nice aromatics.

Well to start off, this one is rather bitter (who would have though!), which at first actually makes it quite difficult to pick out the other flavors – this is not necessarily a bad thing, especially for hop heads, like me. Loads of citrusy hops flood the palate, with a piney and rather earthy flavor as well.  The bitterness is quick and long, it sticks with you for some time afterwards. As my palate

adjusts to the bitter hop explosion, I’m now able to taste some fruity esters – apples, cherries, and strawberries start coming out. I`m also getting some very slight hints of caramel lingering in there. Quite a  bit of pungent alcohol here, more then I would have thought for the ABV only being 7.5%, Making it pretty warming on the tongue.

I have to say that the body has a certain wateriness to it and the carbonation is pretty light. In some ways it almost pours out a bit like an IPA from a cask. The head is almost soapy, with the lightly carbonated fizz sticking to itself from all the hyper-hopping.

Now this certainly Isn`t the best double IPA that I`ve EVER had, but it is quite enjoyable and would probably recommend it to others. An considering Quebec is pretty weak for IPA`s it was a good 650ML treat. 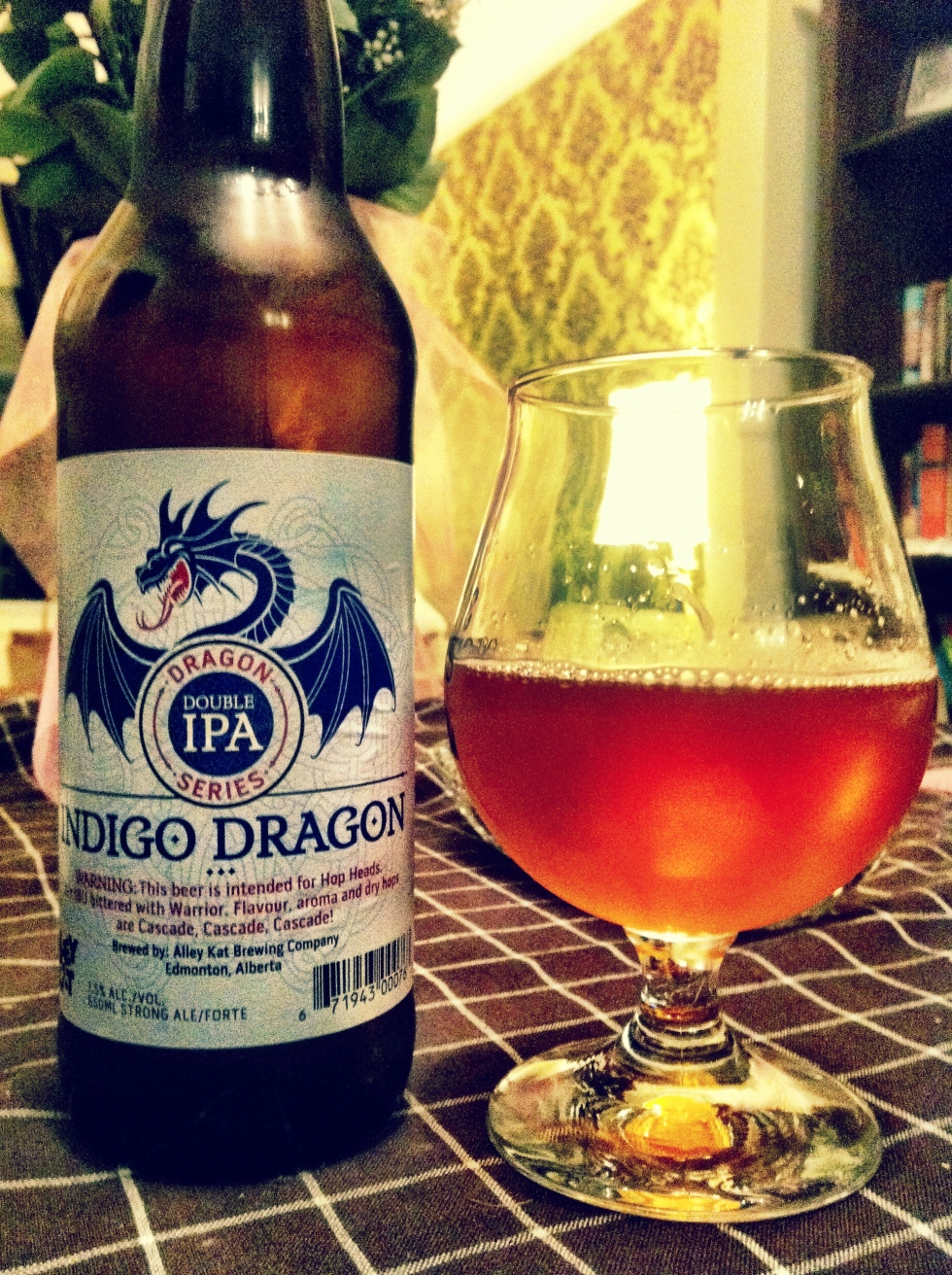