An Imperial Stout Fit for Royalty – St Ambroise does it right! 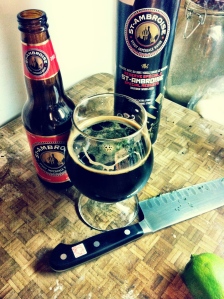 It seemed about a good time to review this one as I’ve been sitting on it for over a year, patiently waiting to crack it open. Also, I managed to find another bottle from the 2011 vintage, so it helps to have second one to age if I so choose. The 2012’s are just hitting the shelves now, so if you enjoy stouts, strong beer, and bourbon flavors, I suggest you get yourself a bottle, or ten. But for now, I’m going to relish this year old stout, in hopes it lives up to the hype.

For those who don’t know, a Russian Imperial Stout, simply put,  is a very high alcohol stout, boasting lots of character. Oh, and generally damn delicious. The “Russian Imperial” portion originates from the 1800’s when the British brewed this special beer to impress the longest ruling female Russian ruler, Catherine the Great. The term “imperial” is now often used to describe other styles of beer as well,  for example: Imperial IPA or Imperial Pilsner.  Although it doesn’t quite make sense, adding the word imperial before a beer style basically means it is a stronger than normal version of that particular style.

I popped the cap on this one and from about two feet away I could smell the bourbon; this

made my pants tighter. I slowly poured this bad boy into my snifter glass. It’s impressively thick and extremely dark. The head has a dark beige color that sticks to the glass when swiveled around a bit. This is quite an fantastic specimen, virtually no light can pass though this sludgy mess.

The second it hits your tongue there are bursts of gigantic flavors, this is one rich and powerful brew. Robust bourbon flavors are the first to hit my palate; I have had many oak aged beers, but this is definitely one of the more predominantly powerful examples of this style that I have ever had. The bourbon flavor sits with you, long after the other flavors have dissipated. It has a nice organic taste profile, with wood and lots a earthiness. After the initial bourbon blast, flavors of very dark unsweetened chocolate start to quickly emerge, along with burnt caramel, blackberries, and hints of strong, dark

roasted coffee. The ending is quite tart and rather bitter, which I’m sure is partially do to the hops and the dark roasted malt, but appears to be more likely originating from a rather present alcohol flavor that dominates the aftertaste nicely.  Once said and done, the lingering finish is riddled with a long drawn out bourbon flavor, it sits on the back of your tongue, waiting for the next sip. The whole thing is surprisingly dry, I presumed there would be some apparent sugars on the palate, but they have balanced this well enough that it simply doesn’t need it.

The body on this stout is thick and chewy with moderate carbonation – just enough to let you know it’s there – allowing the flavors to pop on your tongue after every rich and creamy sip. As the beer warms and my palate adjusts to the plethora of strong flavors,  the dark fruits really start to come out and show themselves – cherries, blackberries, and figs appear, with a subtle fruity sweetness.

A Great offering from Mcauslin; one of, if not their best in my opinion. Their Vintage Ale is also a thing of beauty, I highly recommend it. Mcauslin has been brewing beer since 1989 and was one of the first group of independent breweries to hit Quebec. Although I wish they had more year long offerings, they do have quite a few seasonal beers that you can get at various points in the year.